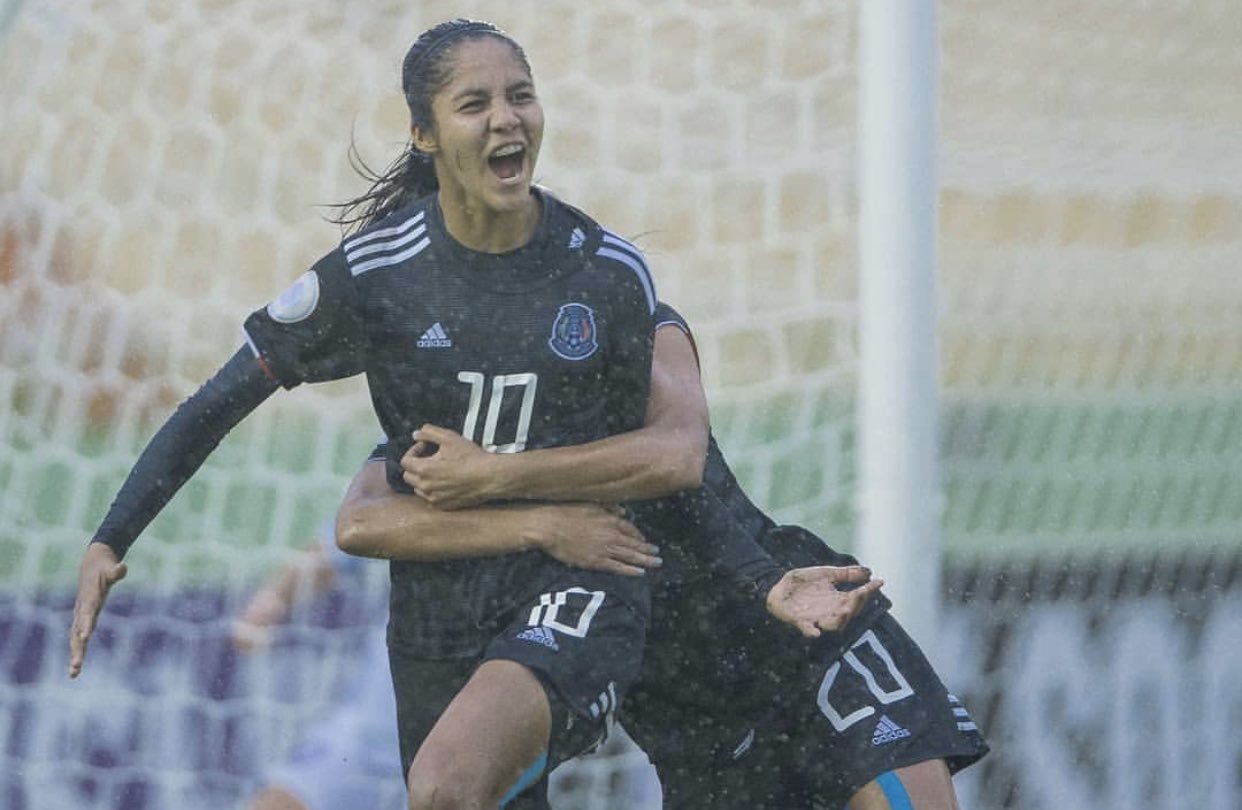 Alison Gonzalez, who turns only 19 years of age on this last Sunday in January, has already taken part in some historic moments. She and her teammates were deemed the H1s7oricas after being the first women’s team to reach a U17 World Cup final in 2018. She was part of Tigres Femenil’s first title victory during the Clausura 2018 season of the Liga MX Femenil – a league that’s made its own history almost four years in.

It’s a word Alison herself alludes to as she joins my Our Futbol cohost, Adriana Terrazas, and I for an interview, returning to Atlas Femenil from her first national team camp with the senior side under the newly appointed Monica Vergara, the very coach who led the U17 side to that legendary second place finish almost three years ago.

“She [Monica] is a very capable person with great values. She deserves this. She’s been working for a long time for this moment. I’m so happy to be writing this new piece of history with Mexico and our first women coach.

Honestly, [the camp] was something very special to me. Since I was a little girl, I dreamt about representing my country and I felt very happy. It was something that I’ve worked my entire life for, so it was a moment of pride for myself and my family.”

An accomplishment, as funny as it is to think about, that started because of an ironic gamble.

Born in Nayarit, Tepic, Alison was raised by a mother who grew up playing volleyball and understood the importance of sports in a child’s life.

“Alongside our academic careers, of course” as Alison puts it.

So her and her twin sister, Aline, tried everything. Karate, gymnastics and even charrería – a traditional horse-riding competition that isn’t as extreme as a rodeo but that does require talented horsemanship and effective rope skills. But soccer was the sport that resonated most with Alison and at four years old, she was invited to go play with a friend’s team made up entirely of boys.

“My mom wasn’t too happy with the idea,” she shared. “Just having to [be scrappy] against the boys… she didn’t want them to hit us or hurt us. And ultimately, my dad ended up telling her, ‘Let them. Les van a dar un balonazo (they’re going to get hit with the ball super hard) and they aren’t going to want to play anymore. But it was actually the exact opposite.”

As Alison describes it, that was when “parting of the waters happened.” Where she found an instant connection to soccer and with the help of her very supportive grandparents, paved way for her career to begin.

She would go on to win gold medals in Olympic development tournaments in elementary and junior high school, regarded as a “high-caliber” talent in the amateur ranks early on.

Then, just three days after her fifteenth birthday in 2017, that also doubled as a farewell party, she and her sister made their way to Tijuana to take part in the development programs there, participating in state and regional tournaments until the league (which had just been announced in late 2016 by then Liga MX President Enrique Bonilla) was fully formed.

“It was complicated. We’re the only daughters they have and up until then, we never had a reason to leave the house. Our mom was always there to support us so [when we left], we had to learn to be self-sufficient. It was strange at first but in retrospect, helped me grow and change my mentality.”

Alison Gonzalez would then head to Monterrey once the league was up and running, joining Tigres Femenil in 2018, where her nickname “AliGol” was formed. She scored 11 goals in 22 matches throughout her two seasons with the team. A nickname she doesn’t mind but that she recognizes comes at a price.

“They actually asked me if I liked AliGol or Gonzagoal or something like that, I can’t remember. But in Monterrey, that’s what they called me. I really like it. I like that people recognize it and continue to use it, but it’s also comes [with its expectations]. I have to keep scoring goals because if not, bye bye nickname.”

Despite those 11 goals she scored with Tigres, she started in only five regular season matches throughout those two seasons, and not a single start in the playoffs. She moved to Atlas Femenil at the start of the 2019 calendar year and those nickname expectations have been met with Las Rojinegras so far – reaching 40 goals in just two years and scoring five of the seven goals for Atlas in the first four matches this season.

In Atlas’ first match of this tournament, she single-handedly got the victory over America. A culmination of her balance, power, discipline and hunger for success on the field resulted in her executing one of the best goals so far this season – a Zlatan-esque shot that capitalized on Renata Masciarelli’s far-out positioning to give Atlas the three points. An accomplishment that compelled Leo Cuellar, a pioneer for women’s soccer in Mexico in his own right, to call her the best player in the league.

She nearly won the golden boot last season were it not for former Tigres Femenil teammate, Katty Abad, claiming it for herself in the last match of the regular season against Chivas. An accomplishment that Gonzalez only uses as motivation.

“I thanked her [during the national team camp] and told her that as long as she maintains her form, I’ll demand more from myself every day. At the end of the day, we’re colleagues trying to do our best.”

What does “the best” look like for Alison Gonzalez?

For starters, it isn’t solely her soccer career. She’s continued going to school throughout all this, a routine not uncommon for many women athletes, who understand the monetary investment doesn’t always come from organizations or federations so they ensure that they have an education to support them long-term.

“It is difficult to manage your studies while playing soccer with all the traveling and games you have to play. But it’s not impossible,” she states. “I’d love to find a good school to be able to continue advancing in my studies. I don’t think about soccer all the time. I would love to study architecture in the future.

But I do have goals I want to achieve [within soccer]. I would love to win a title with Atlas, win the golden boot, continue to advance at a level that keeps me with the senior national team and eventually win a World Cup. But right now, playing in Europe is one of my biggest dreams.”

There’s been a few notable players that have made their way from the Liga MX Femenil to Europe. Recently, Rubi Soto from Chivas Femenil arrived at Villarreal in the Liga Iberdrola and Estefania Fuentes went from America Femenil to Sassuolo in Italy, among others. The growth of the Liga MX Femenil has been apparent to those who have followed it since its inception, including Gonzalez, who has experienced record-breaking fans, age limits lifted and the acceptance of dual nationals into the league.

“Before [when the league first started] we used to see the goleadas. You knew ‘oh this team is going to beat this team.’ But now, every team has their own style and form of playing. The players are growing technically… it’s all part of the process, which is important. Now, you don’t know who will beat who.”

Monica Vergara was able to call on 21 players from the league to complete her national team camp consisting of 26 total players this past week, two of which came from her U17 and U20 teams: Nicole Perez and Alison herself. But that team also included Stefany Mayor, who is ten years Alison’s senior, and who has plenty of national team experience.

“It holds a strong responsibility and an incredible privilege to be able to train with the best [players] this country has to offer,” she said. “I think ‘Wow, I’m at an impressive level.’ We understand that it’s a long process. But it’s great to be able to start a history with the national team now.”

As history is studied, more history is created alongside it. As much as the league and the women’s national team continues to jump through hurdles to grow in all areas, Alison Gonzalez focuses not in the dangers of balonazos, but strongly believes Mexican women can be the ones taking those hard shots.

“I’ve always said Mexico is destined to do great things. I hope that in ten years, we’ve already won a World Cup and continue to invite little girls to follow their dreams.”