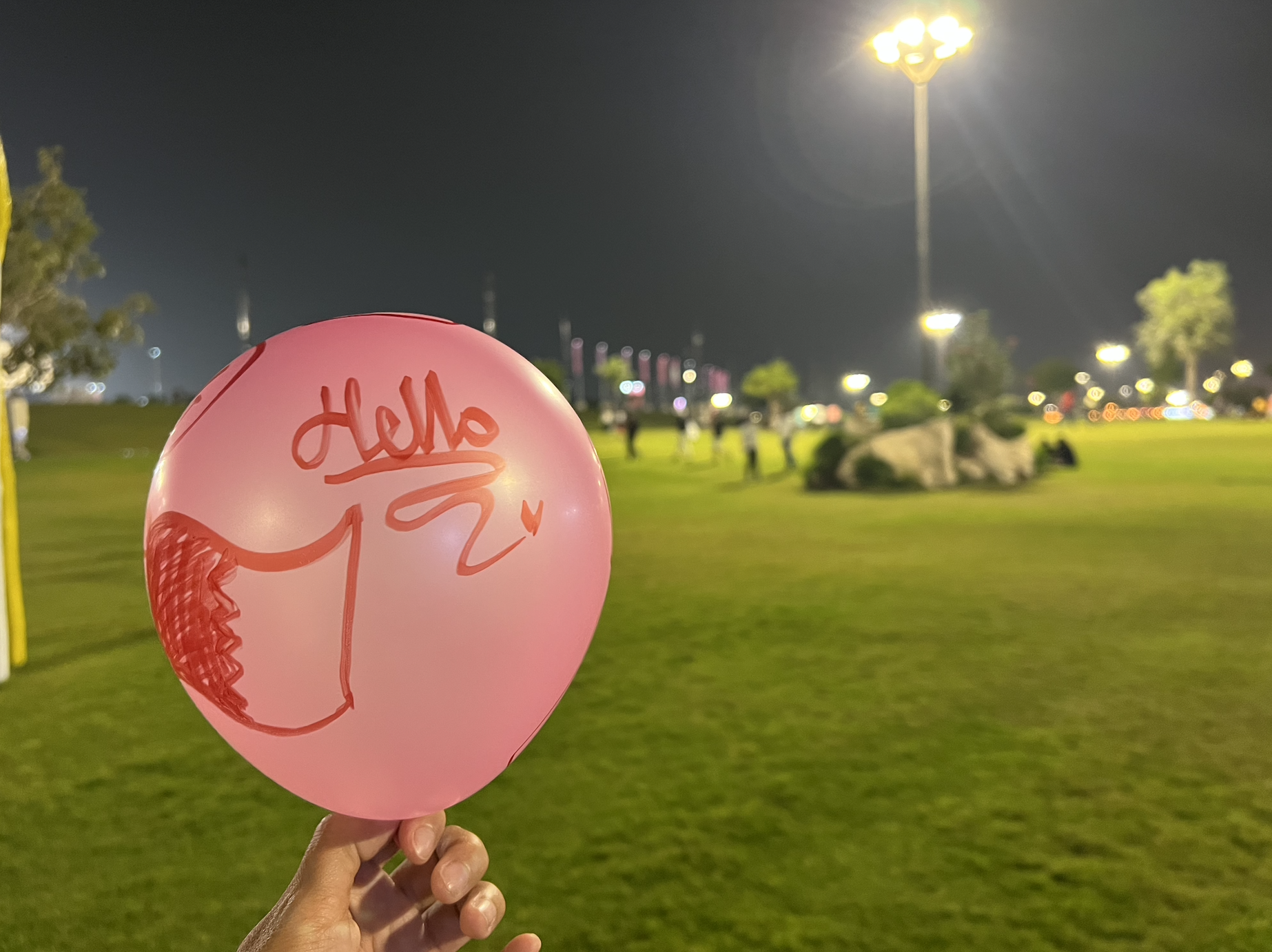 I waited outside Al Bayt Stadium before the England-USA match to say hi to a friend who had also made the trip to Doha and was heading towards the stadium. While I waited for him to arrive, a young girl came up to me and handed me a balloon.

I said, “thank you,” we exchanged smiles and she left without saying a word.

The balloon was pink, and she had drawn the host nation’s flag along with messages that read “Hello” and “Welcome.”

The little girl had also handed a balloon to a fellow Mexico fan and friend who was standing with me who proceeded to pop hers just a few minutes later as we made our way into the stadium.

“I don’t think they’re going to let us enter with it,” she said.

I took my chances and walked through the security with the balloon in my bag. It got through all the inspections and sat through a horrendous 90-minute draw with me.

It even made its way back to Los Angeles with me as well.

It’s now a deflated, much smaller balloon but you can still see the flag and her messages when you look at it.

In existence but deflated.

It’s been seven days since I returned home and double that since I last wrote an anecdote.

After Thanksgiving and after Mexico’s loss to Argentina, I felt myself deflated to some degree.

It’s funny in retrospect but once I told myself there wasn’t really a magical ending awaiting Mexico at the end of it all, a sobering reality kicked in for the remainder of my trip in Doha (pun absolutely intended).

Perhaps my mood would’ve been significantly different had Mexico had a Saudi Arabia sort of start, defeating an unlikely Goliath or a Morocco-esque ongoing Cinderella story where the Quinto Partido actually came to be.

I suppose because there was no real magic out on the field for Mexico — outside of those brief six minutes of elation one felt in the second half of the final group stage match that blessed us at least with a Luis Chavez golazo that Mexico can claim — I was more cynically aware of everything outside of me.

That’s not to say there wasn’t fun. There was. Mexico fans are a real pleasure when it’s all fun and when we aren’t starting the chant when frustration kicks in.

I also can’t stress enough how joyful it was to hear people participate in the This Way viral trend – and even the way it made its way to the elimination round banter.

The beauty of the World Cup is incredibly marvelous because it quite literally captivates the world. Both in the passion of the fans and their willingness to use their favorite sport as a tool to fight for what is right.

But even as I sit here back at home, reading stories of how those in charge callously dismiss yet another atrocity that has occurred while the world is looking at them, I look back at my time in Doha and understand why I felt and still feel so much cynicism about the way this tournament is transpiring.

A poor parallel that I hope isn’t seen in vain; only that it’s on par with how many Mexico fans feel about the state of the federation where financial gain is (and is perceived) to be at the forefront and the infrastructure itself has taken a backseat.

No amount of pride that fans or players feel can stop the bad things from happening at this point.

These bad things have caused many to suffer, including the much-talked-about workers I encountered in the villages I inhabited. Workers that had migrated to the host nation from Pakistan, Bangladesh, India, among others and day in and day out were all around us – leading us to the metro, stapling down patches of grass, serving us our food, or fixing lights in a parking lot.

It’s defeating when you consider how entertaining the matches on the field have been. Like that balloon I was given, the games are a beautifully veiled fabric covering up a bunch of hot air – where it appears like nothing of substance exists. And when all is said and done, the air will disappear and you’ll be left with deflated debris.