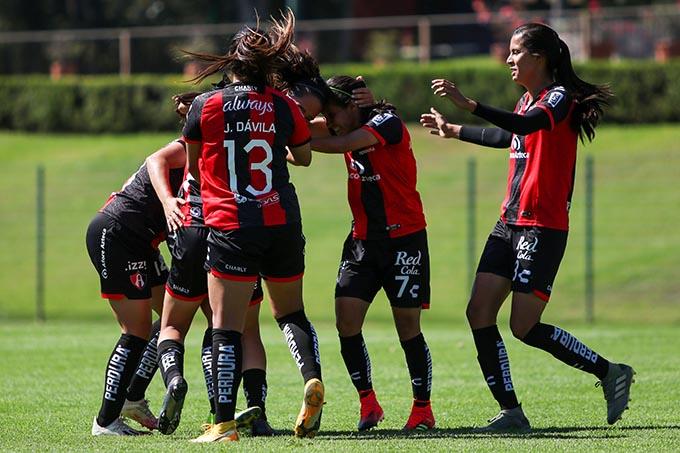 A quick turnaround as we enter into February and begin our double-header jornada for this weekend (technically three jornadas if you count the matches from Monday).  This was the second jornada in a row where 26 goals were scored among the 18 teams but what all those goals (or lack of) mean is the bigger story. Here are my three takeaways from Week 5.

Atlas continues with their fighting spirit. It was an exciting match Thursday morning that might have ended with me talking about Pachuca finally finding their form under Toña Is’ long-term project with the way they came out and three goals in under thirty minutes. But Atlas once again came out and let their field work show they have something to prove since last season. The three-goal deficit closed in when a perfectly placed free kick shot from Karen Andrea Garcia found its way to the back of the net followed by a well-calculated header from Alison Gonzalez just three minutes later. Valeria Razo’s chippy goal in the final minutes of the match secured that the point and allowed them to remain undefeated this season. I spoke last week about how Atlas’ next few games would be about proving themselves and while the goal differential currently has them sitting in third, it wouldn’t be surprising to see them in first place soon.

CHIPPY GOLAZO TO LEVEL IT! 🦊🔥@Valeriarazoc secures the point for @AtlasFCFemenil with this clever goal over everyone!

America remains unconvincing. It says a lot when a higher-seeded team is only able to convert one goal against a team lower in the standings. And while Pumas also struggled against Necaxa this season, looking at the broader picture, Pumas has proven to have a useful strategy under Davila when utilizing their new and veteran players. America has not. Last week’s goals against Toluca were refreshing and did alleviate some of the worries, but the lack of definition and quality against Necaxa even with players like Ximena Rios back on the pitch didn’t. While it’s positive that a new signing like Mayra Pelayo was able to get the winning goal, the competition in the league continues to grow and we’re starting to see some of the former top teams take a back seat to this progress. Projects like America’s will need to decide if they are willing to adjust for the sake of advancement or remain stubborn in their ways.

Tigres hitting a slump? The reigning champs currently sit in fifth place with 10 out of 15 possible points. The loss against Atlas was the Alison Gonzalez show but also spoke to Tigres’ inability to properly finish close chances. A one-goal game against Puebla was also mediocre when you think about the star-studded performances they’ve played in the past. But this recent draw against San Luis was the bottom of the barrel for Tigres, if such a thing can exist for such a strong team. They’re missing some key players with Lizbeth Ovalle injured and Belen Cruz still but one of Tigres’ strengths has always been their abundance of depth. A win against Necaxa next jornada should be guaranteed but so was one guaranteed against San Luis. We shall see what happens.

BONUS) When you let Aylin Avilez play, she scores (and currently sits in second in the golden boot race)