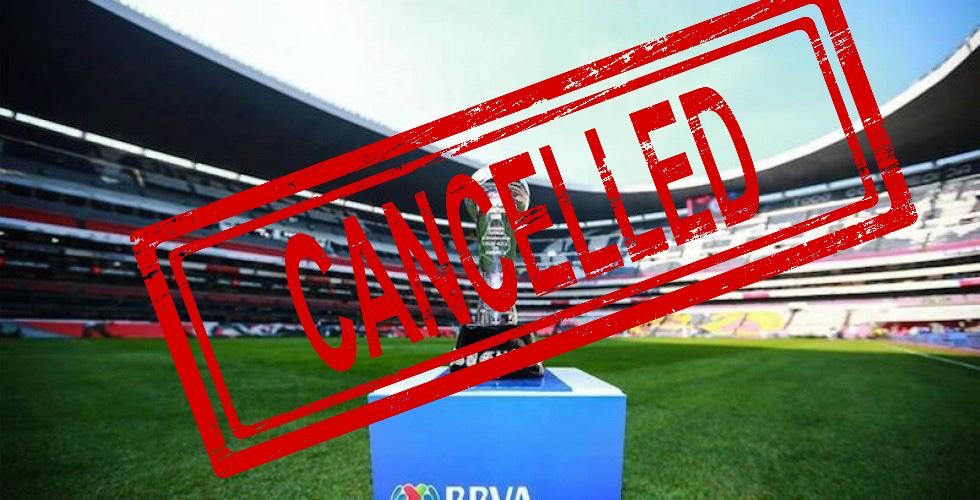 On the morning of Monday, May 18, Liga MX president Enrique Bonilla appeared to declare that the Liga MX Clausura 2020 tournament would be cancelled after a virtual meeting with sponsors and senior officials with the league and the clubs. The tournament, as part of the decision, Liga MX would not crown a Clausura 2020 champion, the first time in the Professional Era of Mexican futbol where a season or short tournament did not finish with a champion.

The reasoning, according to a report from El Universal, for the decision which was nearly unanimous, had to do with a balance of scheduling concerns and the state of Mexico’s response to the novel coronavirus pandemic at the point in time the decisions were made.

What made the decision complicated, should owners decide to confirm the reported decision in a Wednesday meeting,was that several ideas that had been discussed to resume the tournament behind closed doors, including holding the remaining games at one venue, required games to be played in Mexico City, presently the country’s official epicenter of the country’s COVID-19 pandemic.

Some owners, like those of Chivas de Guadalajara, wanted to resume the tournament’s games immediately after the Mexican government announced the country’s entry into its Phase 1 of its economic re-opening process. However, because the number of tests conducted in Mexico has been quite small relative to the population and were likely focused in Mexico City, the small number of cases in places distant from Mexico City and Baja California, including in Chivas’ home state of Jalisco, might not necessarily indicate the safety of playing games in places like Guadalajara or Leon.

Among those in the discussions and in advisory positions as to whether the league would continue was Hugo Lopez Gatell, undersecretary of Mexico’s Ministry of Health Hugo Lopez Gattell. According to a report in MedioTiempo, league officials held virtual meetings with Lopez Gatell several times per week to try to define the best-practice scenarios for returning to action. And despite the consultation, a plan of action was not completed in time for the season to realistically continue.

By making the decision to cancel the rest of the Clausura 2020 tournament, Liga MX accepted a significant risk of lost TV revenue for its teams for the Clausura tournament. But, according to the reports, the decision allows the league and networks to come to agreement as to payout structures, rights, and contingency plans for Apertura 2020, given the uncertainties arising from COVID-19, the disease caused by the novel coronavirus SARS-CoV2.

The decision also affords the federation some leeway as to handle some matters regarding El Tri, as the senior selection has not played a match of any kind since November. El Tri has had five matches cancelled so far due to the pandemic–three friendlies and two CONCACAF Nations League playoff games.

The decision does not end the legal matters that the federation and Liga MX faces, especially regarding the suspension of promotion and relegation in the pyramid. Today, Ascenso MX clubs Leones Negros de UDG, Correcaminos de UAT, and Venados de Merida announced they would file legal action with the Court of Arbitration for Sport (CAS) regarding the FMF’s suspension and cancellation of promotion and relegation.

It is a case that bears similarities to the class action suit lead by several American clubs against the U.S. Soccer Federation regarding the federation’s unwillingness to implement promotion and relegation in its league structure. However, according to law professor Steven Bank, who covered the U.S. case, whether a federation that has promotion/relegation can end it at its discretion and what limits should exist on that discretion.

CAS has already ruled in the Miami FC v. US Soccer case that FIFA's regs don't require a country to adopt pro/rel. This case could take the question a step further by asking whether a country that has pro/rel can end it at its discretion or subject to certain limitations https://t.co/EtntFkh8wn

It is a case that provides another example as to how the COVID-19 pandemic, like in the United States with the passage of the CARES Act and proposed HEROES Act (a bill that extends the payment protections in the CARES Act omnibus bill to 501c(6) firms that often perform lobbying services for corporate clients), could provide the cover for a massive, long-term restructuring of power and business, including that in football.

UPDATE 1: The league is expected to make a final decision on whether the remainder of the Clausura 2020 tournament would be cancelled after an owners’ meeting on Wednesday, May 20.

UPDATE 2: On Friday, May 22, Liga MX officially cancelled the remainder of its Clausura 2020 tournament due to COVID-19. Divisions had existed between some team owners, like those of FC Juarez and Chivas, who did not think their teams were in COVID-19 hotspots and that it was safe enough to play games, and other owners, like those of Cruz Azul, Club America, and Santos Laguna, who worried about the risk to their players. In fact, the Laguneros‘ worry about returning to play were confirmed when several players who showed no symptoms tested positive for COVID-19.

However, in a press release concerning the cancellation of Clausura 2020, the league gave an idea as to what its intents were in announcing a plan for teams to return to training by the first week of June 2020 and that the missing fixtures in the coefficient calculation as a result of Clausura 2020 will need to be obtained in the same fixtures in either Apertura 2020 or Clausura 2021, depending on when and where the vacated match was supposed to take place.

The league also announced that Cruz Azul and Leon, the two teams with the best point totals not already qualified for CONCACAF Champions League 2021, would be the final two representatives for the league in the 2021 edition of the confederation’s major continental club tournament.