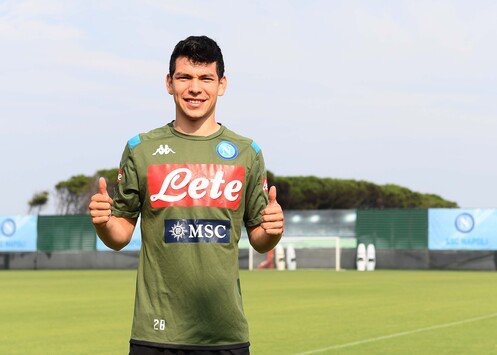 There were no goals or assists or playing time in the Serie A for this Mexican Abroad but Hirving ‘Chucky’ Lozano’s move to Napoli was finally confirmed Friday morning on a five-year deal.

Lozano wasn’t available to play in Napoli’s exciting first match of the season against Fiorentina that ended in a 4-3 victory but will likely have his chance in their next match against Juventus… who have the likes of notable Portuguese player, Cristiano Ronaldo. Given Chucky’s reputation for scoring in his debuts, Saturday should be an interesting match up for various reasons.

NEXT MATCH: Sat, August 31st against Juventus (Serie A)

Raul Levels It For Wolves

Raul Jimenez continues his good run with Wolves this past week with a goal in their first leg Europe League playoff match against Torino in the 72nd minute to secure the 3-2 victory. After his strong header inexplicably failed to make its way into the back of the net (even after deflecting off De Gea’s back) last week, Raul got his first goal of the Premier League season when Wolves needed it the most during their match against Burnley on Sunday. Down 1-0 for a majority of the match, Raul would be awarded a penalty in the 97th minute of match and convert the penalty to level it for Wolves 1-1. Wolves are still without a victory in the regular season play with three draws but their strong form in the Europa League qualifiers makes them a dominant team and with the Mexican striker at the forefront of that dominance makes for positive steps moving forward.

There was no Javier ‘Chicharito’ Hernandez in West Ham’s 3-1 victory against Watford. Various reports stated ‘Chicharito’ suffered bloating in a knee ligament and was going to be healthy to return within a few days. His goal last week was a reminder of what he could bring to the team but Sèbastien Haller’s return to the Starting XI on Saturday resulted in a brace for the French striker and leaves positive competition within the team about who can contribute to the team more consistently.

Still No Minutes For Herrera

Atletico Madrid got their second victory of the season beating Leganes 1-0 on Sunday but Hector Herrera was once again left without any playing time during that match. It’s still early in the season and Herrera’s contributions at Porto were enough to get the Spanish club to notice him and influence him to miss out on the Gold Cup this past June to secure passport arrangements. With two wins in the season, it’ll be up to Simeone to test Herrera out against Eibar next week and allow his performance to do the talking.

Barcelona 5-2 Real Betis (Guardado was subbed out in the 61st minute, Diego Lainez subbed in at the 75th)

In the fifth installment of the clash between the two LA teams, three Mexican players were at the forefront of the match with Carlos Vela starting for LAFC and Jonathan Dos Santos and Uriel Antuna starting for LA Galaxy. Zlatan was the leading goalscorer for LA Galaxy alongside newly-signed Cristian Pavòn but it would be Jonathan Dos Santos’ control of the midfield that proved to be integral to not just this match but throughout the majority of the season. He stayed down for some time in the second half and was ultimately subbed off in the 82nd minutes as a precaution. Given both the playoff stretch LA Galaxy is in these next couple of weeks and national team call-ups to be announced soon, an injury to midfielder would come at a huge blow to both squads. Antuna played 55 minutes of the match and will likely also be part of the national team roster for the September friendlies, giving him more chances to improve his craft.

But it was Carlos Vela’s late game antics that stole the latter part of the match. After scoring his 27th goal of the season (and closing in on Josef Martinez’s record), Vela began slightly limping, touching his hamstring and continuously stretching in between plays. Despite going to the side to be examined and getting back on the field with a desire to continue playing, Vela was subbed off by Bob Bradley in the 61st minute as another precaution. Vela responded by throwing his armband to the floor and yelling at Bradley who after the match stated it was a “hamstring tweak” that he ultimately “made a decision [he] felt was right.” Vela will undergo an MRI Monday afternoon.