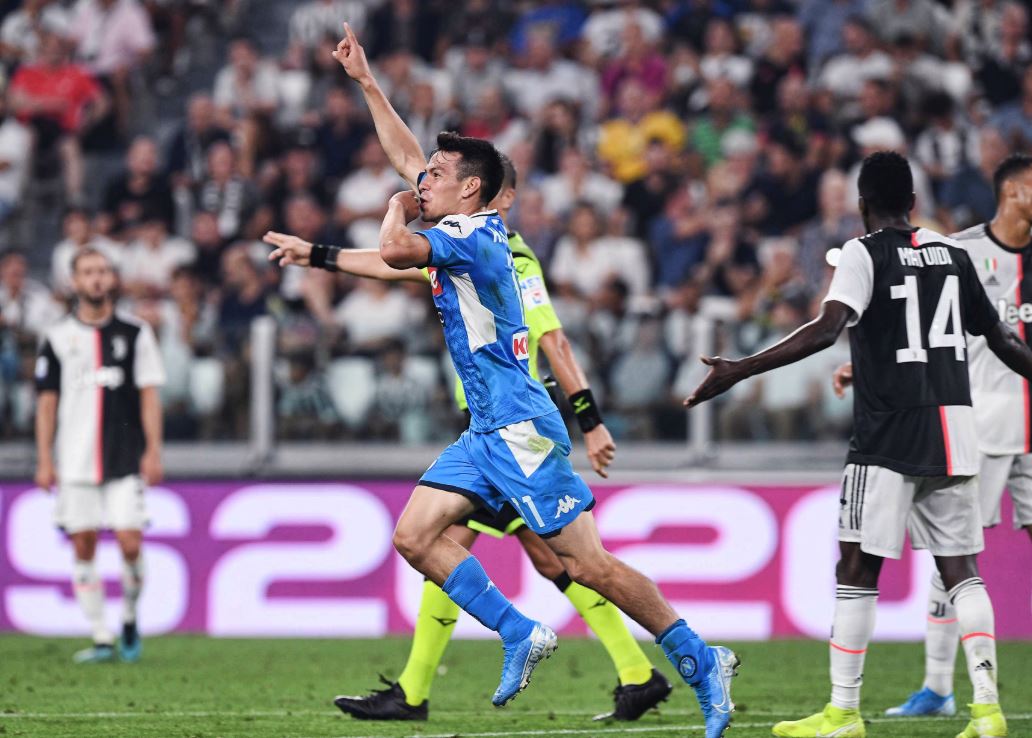 In typical Hirving ‘Chucky’ Lozano fashion, the Mexican winger continued his pattern of scoring in debut matches.  Lozano was subbed on in the second half against Juventus to help change the momentum of the match after Napoli went down 3-0.  Cristiano Ronaldo’s goal should’ve cemented Juventus’ lead but Chucky’s new team made a dramatic comeback and piled on three goals of their own, including one from Lozano off a breakaway counterattack in the 68th minute. Unfortunately for Napoli,  an own goal from Koulibaly two minutes in stoppage time gave Juventus the win and left Chucky’s side with no points. Still, Chucky is proving to Carlo Ancelotti just how valuable of a player he can be.

The comeback is on … Chucky Lozano opens his account in Serie A to cut the deficit to one goal! pic.twitter.com/tGvAeHN3IZ

NEXT MATCH: Sun., September 15th against Sampdoria (Serie A)

Edson Álvarez wasted no time connecting with his new team, scoring in his debut against Apoel Nicosia in Ajax’s Champions League playoff match at the 43rd minute and providing Ajax the lead just before halftime. His goal would help his team defeat Apoel Nicosia with an aggregate 2-0 scoreline in the second leg and help them qualify for the group stage match of the tournament.  Edson was also a major contributor in their 4-1 victory over Sparta playing all 90 minutes.

Raul Jimenez’s good form continues with two goals in two games this week. His first goal against Torino in the second leg of the Europa League playoff in the 30th minute of the match was thanks teammate Adama Traoré whose quick low pass helped Jimenez knock it in to take the lead.  The Wolves advanced to the next round with a 5-3 aggregate score.

It's not even September yet and Raul Jimenez already has 7 goals in all competitions for Wolves. #ElTriEng https://t.co/Ip7c50EWDj

Raul’s second goal came against Everton on a dangerous play in the 75th minute of the match Sunday morning.  After a heated back and forth contest, RJ9 knocked down the header inside the small box with Lucas Digne’s boot in his face.  Jimenez saw stars for a few minutes, but rebounded and finished the match.  Unfortunately, the Wolves could not hold off The Blues and lost 3-2.

Chicharito is Back in La Liga

Javier ‘Chicharito’ Hernandez is headed back to La Liga thanks to a three-year €8 million deal with Sevilla. Despite scoring recently for the English club, there was much speculation about whether Hernandez’s days with West Ham were numbered. The move to Sevilla will provide a fresh start and a team that will give him the minutes to prove he still has the magic touch. The last time Hernandez played in La Liga was in 2014 on loan to Real Madrid. Chicharito was welcomed in Sevilla on Sunday and is ready to be presented with the number 14 kit on Monday.

.@CH14_ in Sevilla. Great city and region. From my experience actually has quite a few similarities with Guadalajara.

Atletico Madrid continued their winning streak by defeating Eibar 3-2 in a desperate comeback with goals from João Félix (27’), Vitolo (52’), and Thomas Partey (90’).  Unfortunately for El Tri’s Hector Herrera, his services weren’t needed and he remained on the bench during the entire match.  The Mexican midfielder is looking forward to the FIFA International break for minutes against the U.S. and Argentina.

Real Betis 2-1 Leganes  (Guardado played the full 90 mins, and Diego Lainez was not called up)

Jonathan Dos Santos and Uriel Antuna started for the LA Galaxy against the Seattle Sounders to a 4-3 loss.  Thanks to an assist from Zlatan Ibrahimović, Antuna found the back of the net for the equalizer in the 75th minute.  Unfortunately for the Galaxy, the Sounders outscored and outlasted LA for the victory. Antuna was substituted in the 89th minute while Dos Santos played the entire match.

He might not be in LA with one of the “bigger” clubs in Major League Soccer but Marco Fabian and the Philadelphia Union have been making a name for themselves in the Eastern Conference. Atlanta United’s Josef Martinez stole the show early with a phenomenal goal in stoppage time of the first half with the help of Nagbe, but Philadelphia responded and got three goals in the last 30 minutes of the match to secure the 3-1 victory and clinch a playoff spot. Marco Fabian didn’t contribute to the goal scoring during the match but his six goals and one assist this season, he has proven to be an important partt of this team. The Union currently sit in first place with 51 points.