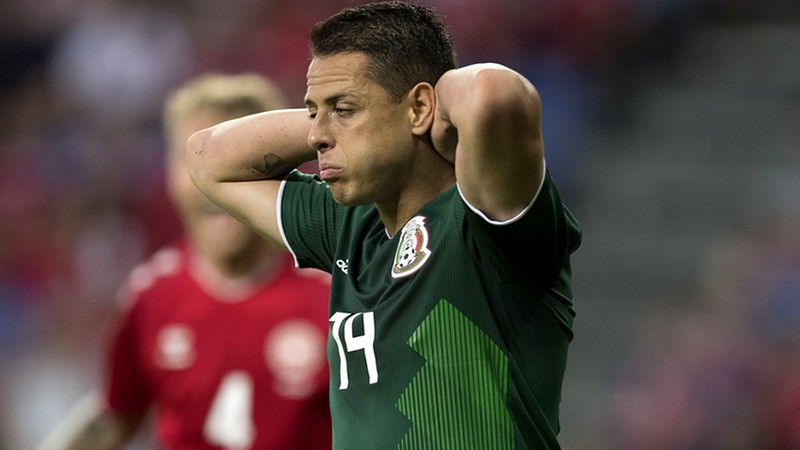 BRONDBY, Denmark. Two goals in three minutes were enough for Denmark to dismantle El Tri 2-0 at Brondby Stadium in a display that exposed El Tri‘s ability to be hurt in defensive situations and not display that guile on the attack themselves. Yussuf Poulsen (71′) and Christian Eriksen (74’), two players who were expected to be protagonists for the Dynamite, were the authors of Mexico’s defeat.

In the first half, Denmark took the initiative early on and found ways to hurt the El Tri in defense. Although their first attempts at goal in the opening ten minutes failed to test Guillermo Ochoa out of their ball control, the Dynamite were nearly able to open the scoring off a turnover off the feet of Hector Moreno. But Carlos Salcedo intervened before Phone Sisto could finish off Denmark’s seventh minute chance.

Guillermo Ochoa was forced to intervene himself on a couple of occasions throughout the first half. The first time came off a shot by Nicolai Jorgensen in the eleventh minute. Thomas Delaney, who made a chance himself off an interception close to the area midway through the first half, facilitated the Feyenoord striker with a key pass.

Even though El Tri started to find their footing with control of the ball, and started to advance their controlled play deep into their attacking half of the pitch, they found few chances that were not ruled out for offside. Jesus Manuel Corona, Hugo Ayala (off a corner), Andres Guardado, and Hector Herrera all had shots that forced either a block from a Denmark defender or a save from Kasper Schmeichel, or an offside.

But as the first half ended, Denmark had all the information they needed to start hurting El Tri harder and more frequently. At that even started before the end of the first half. Guillermo Ochoa was forced to keep out a warning shot by Jens Stryger Larsen.

The second half itself saw few genuine forays forward, as both teams tried to be patient and integrate their substitutions. Only a sixty-ninth minute attempt by Rafael Marquez interrupted this silent period.

Then in the 71st minute, Yussuf Poulsen wrongfooted Jesus Gallardo and Carlos Salcedo off a lateral dribble and fired a curling shot from outside the area that beat Guillermo Ochoa to open scoring for Denmark.

Three minutes later, Christian Eriksen doubles the Dynamite advantage, finishing off a pass that exploited Gallardo and Salcedo’s isolation on the left hand side of the Mexico defense.

El Tri got a chance to cut their deficit in half six minutes from the end of 90 off a counter-attack, when Hirving Lozano found Javier Hernandez with a cross. But the header from Chicharito rang off a post and stayed out of goal.

But ultimately, Mexico would see itself shut out for the second of its three preparatory matches with the questions of its lack of collective goal-scoring and danger-making abilities starting to ring louder only eight days from its opening match in the World Cup, as well as mental and collective fragility after TV Notas’ report of many players at a party.

With their preparatory matches behind them, El Tri now have to take the lessons they learned along the way and apply them in the high stakes matches, which begin when Mexico opens its World Cup Group F play against Germany on Sunday, June 17.

As for Denmark, the side led by Age Haraide begins its World Cup run in a more positive mood one day earlier (on Saturday, June 16), when the Dynamite take on Peru in Saransk.