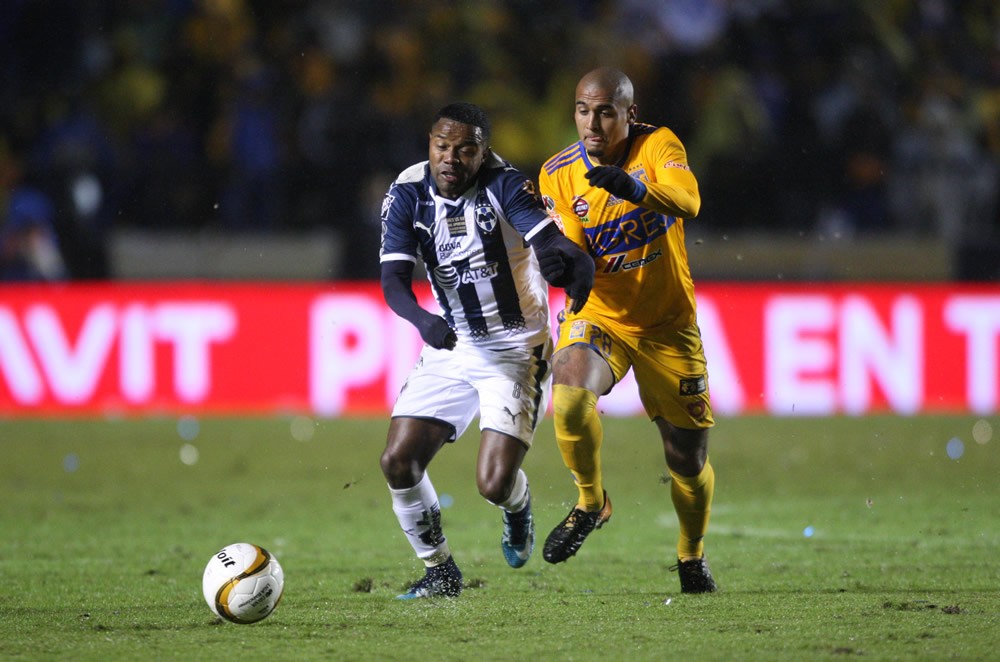 SAN NICOLAS DE LOS GARZA, Nuevo Leon, Mexico. First-half goals by Nicolas Sanchez (8′) and Enner Valencia (25′) were the story as Tigres UANL and Monterrey played to a first half draw at El Volcan.

After inclement traffic weather delayed the start of the Gran Final by 15 minutes, Tigres UANL and Monterrey opened the match in a defensive, highly tactical battle that saw few chances.

In the game’s eighth minute, Nicolas Sanchez put the Rayados ahead on a corner kick that Nahuel Guzman caught once the ball had crossed the line. The Argentina international arquero momentarily protested to referee Jorge Isaac Rojas that he had control of the ball to no avail.

Tigres UANL found few chances early on, with an errant cross by Javier Aquino representing their best early foray on Hugo Gonzalez’s goal. But on a quick counter sprung by an intercepted Jonathan Gonzalez pass in his own defensive third, Tigres got their goalscoring chance when Rogelio Funes Mori fouled Enner Valencia with a hard tackle inside the area to concede a penalty in the 24th minute.

One minute later, Enner Valencia converted the penalty with a panenka just out of the reach of the Monterrey goalkeeper to level the score at 1-1.

After Valencia’s equalizer, the game started to take a physical tone with many hard tackles while both teams tried to make and diffuse chances. And in the melee, which continued into the second half, Tigres established possession of the ball once more and found chances on Hugo Gonzalez’s goal.

First in the 60th minute, it was an Eduardo Vargas header off a change-of-pace cross, which Hugo Gonzalez was forced to catch. Then, one minute later, it was an interchange play between Enner Valencia and Andre-Pierre Gignac, which nearly resulted in Cesar Montes, deflecting a cross from the Ecuador international into his own net.

The visitors had few chances on the break, but the best came in the 69th minute when Dorlan Pabon was played in 1-vs-1 on a long throughball. However, Nahuel Guzman parried Pabon’s shot to safety.

Tigres exchanged with their best chance of the second half to score in the 76th minute, when Andre-Pierre Gignac’s long shot rang off his near post.

And three minutes from the end of the 90 minutes, Tigres earned a man advantage when left back Leonel Vangioni was sent off for a hard tackle on Ismael Sosa, his second booked offense of the match.

Tigres could not generate a goal-scoring chance on Hugo Gonzalez’s goal before Los Felines themselves were reduced to ten players themselves, when Jorge Isaac Rojas expelled Hugo Ayala for a second booked foul in the first minute of second half stoppage time.

In the end, both teams survived the snowy conditions with no team gaining an advantage in the opening leg. However, both teams will lose critical defenders for the return leg in Monterrey due to the red cards.

In addition, Monterrey could be without Argentine defensive midfielder and goalscorer Nicolas Sanchez for the return leg due to a right knee injury he picked up in the first half. Sanchez was subbed out at halftime due to the injury.

And with the draw, the Apertura 2017 Liga MX title will be decided in Sunday’s return leg at Estadio BBVA Bancomer in the Monterrey suburb of Guadelupe. That match kicks off at 7:00 PM Eastern Standard Time (UTC -5).