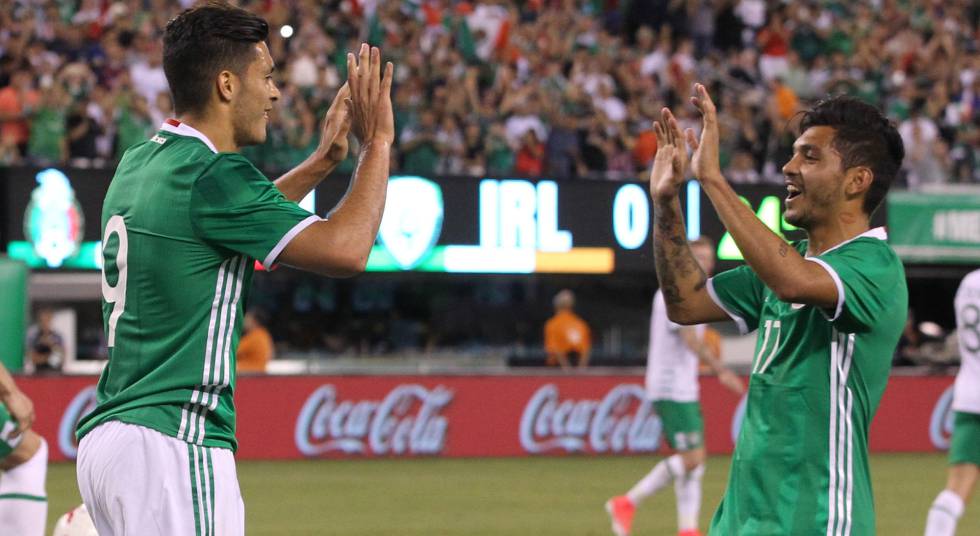 Before we jump into Mexico’s upcoming “summer of soccer”, let’s take a trip on the way back to machine to the last “summer of soccer” for El Tri. The year was 2013, Mexico was going to play 3 qualifiers, a Confed Cup, and a Gold Cup.

It did not go well.

Not that I want to open up some old wounds here, but it is important to rehash to understand the context of where we are going.  4 years ago, Mexico’s best players were in a slump, and their coach was too busy proving Einstein’s theory of insanity to notice.  Add to that a pre-Confed Cup schedule that included 3 Hex qualifiers in 3 different countries to a schedule that included 2 group matches with sides that had 9 World Cup trophies between them.  That’s right – 9.  The players were pressing, the coaches’ hair was graying, the fans were frustrated. 5 points from 3 qualifiers (including 2 0-0 draws) gave way to 2 losses to Brazil and Italy.   To make matters worse, Mexico’s alternate side also looked to be pressing at the Gold Cup, where they lost twice to Panama, including the semifinal.

The 2013 summer of soccer was an abject failure, and it would get worse.  And that’s all I have to say about that.

So let’s zoom back to the present.  Once again, Mexico has qualifiers to deal with, but they will both be at home.  Their Confed Cup group, is not nearly as imposing.  And the Gold Cup?  Well, it’s the Gold Cup.  How would each of these tournaments have to play out in order for them to be considered a success? We will not know until the Fall, but, before we can tackle that, let’s take a look at the current state of the team.

The first thing that jumps out at everyone are those funny looking expressions of joy that the players seem to all be exercising with their facial muscles.  Scientists call them smiles.  Who knew that having fun and enjoying oneself was so important?  In all seriousness, player camaraderie is uniquely important when it comes to national team intangibles.  Full credit to Mexico coach Juan Carlos Osorio for not losing the locker room after last summer’s Boda Roja in Santa Clara.  We must also give him credit for the way he has managed the Mexico US Tour 17.  I was one of the chorus of voices who wondered aloud how smart it was to play 2 friendlies at sea level with a couple of crucial home qualifiers on the horizon.  I am almost positive that JCO has little to no say in scheduling those games, but his fingerprints were all over what happened between games – training at Altitude in Denver.  For all of his faults, we cannot include logisitics and organization as fodder for the steady doses of criticism directed at the Colombian coach.

Back to the smiling, though. The current emotional state of the team is a 180° turnaround from the tense, joyless zombies that pressed their way through bad results four years ago.  The harmony was palpable even in a loss vs Croatia at the LA Coliseum.  And the way the team played a few days later in the Meadowlands left no doubt.  The players not only are enjoying each others company, they are also starting to apply some of Osorio’s advanced theories.  And that should leave Mexico fans bullish for the upcoming summer of soccer.

With Mexico trending upwards, how does that affect the expectations?  Mexican media has taken the “6 points or bust” posture for the hex games.  But let’s be honest, most of them would have taken that same position regardless of how the team was playing.  Frankly, so do most of the fans.  A win over Honduras, though, will give Mexico a chance to qualify for the World Cup with a win over their arch-rivals.

As if they needed any extra motivation.  And we cannot forget that they have not beaten either side at the Azteca since the 2009 Hex.

Moving on to Russia and the Confed Cup.  The draw was very, very kind to Mexico.  Mexico will play their toughest game of the group stage right from the gun against Portugal and the world’s most dominant player.  The second match will match them against New Zealand. Realistically, Mexico would have 3 or 4 points heading into what would in all likelihood be a winner-take-all against the hosts.

Again, the expectation here would be for Mexico to advance to the semifinals, but it would probably be best for fans to temper the expectations a bit.  It would not shock me at all if Mexico lose out on a semifinal berth with a dubious, late second half whistle that dooms the campaign.  I am not wearing a tinfoil hat, but if you think I am crazy, ask Carlos Giron.

Success in the Confed Cup would be nice, but failure to qualify to the semis should not be a game-changer for Osorio, as long as the team looked good and played well.  And that leaves us with the Gold Cup.

It will be an alternate squad, like it was in 2013, and an alternate coach.  Mexico Assistant coach Luis Pompilio will take the helm for the Gold Cup.  The team will consist of Liga MX players, but would be limited to a maximum of 4 players per club.  Players will have the opportunity to impress: 6 2013 Gold Cup vets made the World Cup roster.  Mexico should breeze through to the semifinals at least.  The reality is that winning the tournament would be gravy.  The squad will show its limitations when it faces the stronger sides in the later rounds.

Yes, we will get to watch a lot of soccer over the next two months.  But we cannot lose sight of the most important goal of all:  a top 7 ranking in the October 2017 FIFA rankings.  If Mexico can land in one of those spots in the fall, then the summer of soccer will have been an unqualified success… if any hardware comes with it, great!