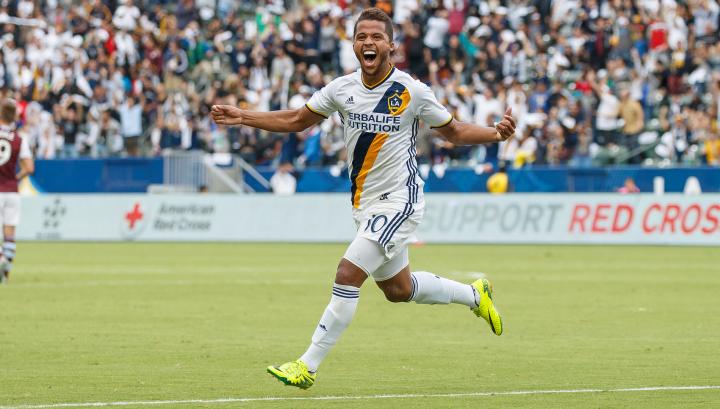 While the Mexican National Soccer Team was getting an unfortunate loss in Los Angeles, striker Giovani Dos Santos and the rest of the LA Galaxy were up north for the “Cali Clasico” against the San Jose Earthquakes where Gio was the star of the game.

There was speculation regarding Gio Dos Santos not staying in Los Angeles to take part in the friendly against Croatia on Saturday, but LA Galaxy’s necessity for the Mexicans player showed during the match. The away game had an optimistic feeling leading up to it: LA Galaxy had already won its last two away games and were hoping to go three for three.

The game started badly for the LA galaxy, with San Jose’s Chris Wondolowski scoring in the 10th minute of play to give the Earthquakes the early lead. However, that hope for an away win would return when midfielder Joao Pedro scored the equalizer in the 19th minute and his first goal for the club.

In the 35th minute, Gio would get his chance to add his name to the score sheet when a penalty kick was awarded to the team and Gio struck the ball past the keeper with ease to give the LA Galaxy the 2-1 lead. The Earthquakes would give the LA Galaxy a further lead when Bernardez scored an own goal in the 44th minute despite a goal of their own from Hoesen in the 37th minute.

The Galaxy offense would capitalize on this lead and continued to attack as much as possible. Off a brilliant cross from Alessandrini, Gio finished the play with a strong header into the back of the net to give Galaxy the lead and a 4-1 victory.

Gio now has five goals in four games and was also called up to the national team’s 32-man preliminary roster that will include his participation in the World Cup qualifiers in a few weeks.

Mexico’s own match might have been a friendly and not important by any official measure, but Gio’s performance during his own game with the LA Galaxy brings a possible positive performance from the striker when he is reunited with his national team.

The LA Galaxy take on D.C United on Saturday, June 3rd before Gio heads to the qualifiers with El Tri.