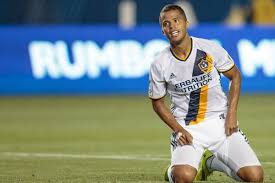 The LA Galaxy returned home Friday night to face Montreal Impact. Giovani Dos Santos was given the starting position and played the full duration of the match.

From the very beginning, there seemed to be a change of tone for the team, particularly up front. With Gyasi Zardes playing his first home game since August of 2016, there was the possibility that the team would have more opportunities to create effective plays in the offense. Gio and Zardes were the man in front and with Galaxy’s goal scorers Alessandrini and Ema Boetang to their sides, the match seemed to work well together.

Gio had a better flow this game, checking for those open spaces between defenders to give passes to his teammates, most notably Ema Boetang. The dynamic lead to Gio feeding the ball to Boateng, who cut the defense and was able to lay it off to Alessandrini just outside the 18 yard box and score the first goal for LA Galaxy.

The team would keep the lead for the remainder of the first half but would need to maintain the lead for the rest of the second half. Gio Dos Santos found the ball less during the second half. The team would begin to create more opportunities without him. The second goal coming off a pass from Gyasi Zardes from Jermaine Jones (both, notably US players), created a play that left the Mexican striker isolated.

The lack of passing to Gio did not go unnoticed. During the post-game press conference, Curt Onalfo stated that despite the win, there were some improvements the team could make, the inclusion of Gio in plays being one of the team.

“Some of the younger players need to learn to recognize his world class runs and when he asks for the ball,” Onalfo stated.

The lack of Gio’s participation has made the striker frustrated. After being out due to injury which left him not only out of LA Galaxy games, but World Cup qualifiers with Mexico, the spotlight for the Mexican has slowly faded.

The LA Galaxy got the 2-0 victory against Montreal Impact (their first home win of the season) but Gio’s participation in the team’s momentum will need to be adjusted to favor him and have him get some goals.

The LA Galaxy is now in fifth place in the Western Conference for the MLS. Their next match will be against Orlando City SC on April 15th.