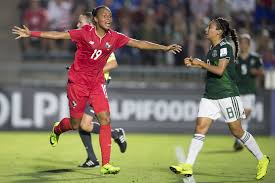 The road to the FIFA Women’s World Cup in France ended on Wednesday for Mexico after a 2-0 loss to Panama in their last group stage match of the CONCACAF Women’s Championship tournament. The teams that ended up in the top three spots in the tournament would have a guaranteed spot waiting for them in France.

The match was a “must-win” game for the Aztecs, who were just below Panama in the Group A standings in third place after ending their first two matches with a -3 goal differential (Panama had -2) and needed to be in 2nd place to advance to the semifinals. Mexico entered the match with almost the same line-up they had against Trinidad & Tobago—the exception being Karla Nieto’s entrance into the XI instead of Nayeli Rangel and the domination was much like that against T&T.

With Charlyn Corral and Katie Johnson in the front, El Tri was consistently getting chances to score. The midfielders were doing well to open up the space with some great work from Stephany Mayor and Maria Sanchez. However, Mexico failed to get any of their shots into the back of the net and the first half’s missed opportunities were best summed up with Corral’s penalty kick at stoppage time that was blocked by Panama’s Yenith Bailey.

Things only got more complicated for the Mexican side when Panama scored just two minutes into the second half. Mexico now needed two goals to secure a victory and their second place spot to advance to the semifinals. The game kept going and much like the first half (and despite their dominance with 63% of the possession) Mexico would struggle in the final third—failing to score any of their 25 shots the whole match.

Panama’s second goal in the 85th minute officially closed the door on the semifinals for Mexico and would eliminate them from a chance of qualifying for FIFA Women’s World Cup next year.

It’s a tough blow for the Mexican Women’s side. The team had qualified for the last two World Cups and has been paving ways to improve the women’s game. The development of the Liga MX Feminil in December of 2016 was something lots of the players in this tournament praised leading up to the matches.

The roster was full of what some called Mexico’s greatest players, with a mixture of Mexicans Abroad like Charlyn Corral, Kenti Robles and Stephany Mayor and experienced domestic veterans like Club America goalkeeper Cecilia Santiago.

The journey has ended for next World Cup and another cycle will not come around for four years. Still, the journey to continuously improve Mexican Women’s Soccer continues and must continue as one waits for the next cycle to approach. It was a message that Mexican defender Christina Murillo expressed after the match as well.

It wasn’t ideal for the women’s team to fail to qualify. Many expected them to finish second behind the US and saw them as the second best team in CONCACAF as well. But failures help cause change. Only time will tell if positive changes come from this bad moment.