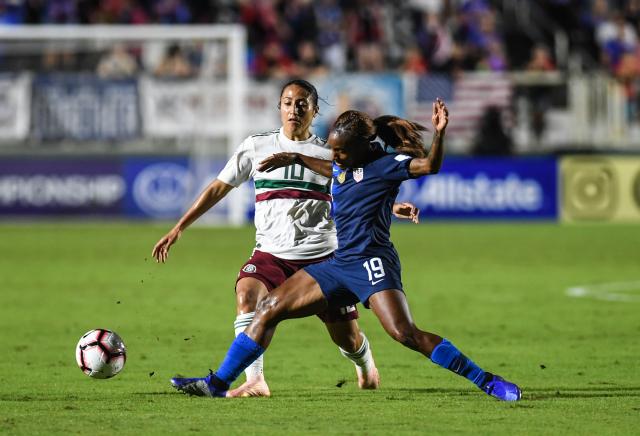 Mexico’s start in the CONCACAF Women’s Championship tournament did not turn out as expected after the Aztecs lost 6-0 to the US Women’s National Team on Thursday in Cary, North Carolina.

The problems started early for Mexico, who gave up a goal in just the third minute of play after a deflected ball landed at the feet of Lindsey Horan who was able to beat Mexican goalkeeper Bianca Henninger and give the pass to Megan Rapinoe who would secure the early lead. The majority of the first half went on that way, with the US taking advantage of the space and looking for their opportunity to score. Mexico switched over to a five-woman backline and with a fantastic save from Henninger in the 37th minute, was able to keep the US out and leave the first half 1-0.

But another set of early mistakes from the defense in the very beginning of the second half gave Julie Ertz a shot at goal and the US a 2-0 lead. From there, Mexico’s chances fizzled and the nervousness turned into apparent frustrated as El Tri attempted to organize itself against the very cohesive American players. It all seemed to be too much. Two headers from Alex Morgan and Tobin Heath increased the score line while Rapinoe secured her brace later on in the match and Morgan would get a brace of her own in the 80th minute.

It was a purely lopsided match. Mexico had three shots the whole match with one of shots on target. The lack of any connection shows in the team’s 57% pass accuracy. It was a tough way to begin their tournament that also has teams fighting for direct qualification seeing as the top 3 teams of the tournament will secure their ticket to the FIFA Women’s World Cup in France next year.

Mexico currently sits in last place of Group A with a goal difference of -6. The US is in first place followed by Panama and Trinidad & Tobago in third.

The loss is a rude awakening to the 13 players on the team that were in Barranquilla this past summer winning gold and mentally, it’s a hurdle they don’t have much time to get over.

Mexico will go against Trinidad & Tobago on Sunday, October 7th.

Mexico Women’s National Team Will Be In The Spotlight – And Need to Work To Keep It
Stephany Mayor: “We have to dominate completely”
To Top