#AskCesar is back! If you wan’t to join next week’s article, just send me your questions on Twitter every Thursday. I select three questions for a video preview and then answer the rest right here.

Let’s see what we have this week!

I worked at a Round Table Pizza during high school. My car, room and entire life smelled like pizza until I quit right before college. After that, I worked various jobs as a mailroom clerk, a maintenance worker, an office assistant, a bookseller, a counselor at a group home and then finally, a soccer writer. Not sure how I got here haha.

Have you ever thought of hosting your own #Xolos podcast??? #AskCesar

? you might see one very soon…can’t go into details just yet but I might have something planned!

The million dollar question, do we reach the 5th game?

We do, and as much as we don’t want to admit it or not, Juan Carlos Osorio will be the one leading Mexico to it next summer. So many variables to consider beforehand, but I think Mexico has the roster and management to accomplish this goal.

Best Batman of all time?

Easy answer, the cartoon version that I grew up watching. And yes, I am including all of the live-action ones as well.

Will Osorio be the head coach for the Mexican NT at the World Cup?

If he didn’t get fired after the Gold Cup, he isn’t getting fired now. Barring some incredible and highly unlikely event, Juan Carlos Osorio will still be coaching Mexico during the 2018 World Cup.

Early candidates to be considered a darkhorse for World Cup?

I need another week to see who else qualifies in order to truly give a good answer here. That said, I’m keeping an eye on Switzerland. At time of writing they haven’t secured a spot just yet for the World Cup, but the team has been perfect through qualifying in Europe.

Do you think USA will qualify to WC? #AskCesar

I’m saying this as a Mexican national team fan: I believe they will. Personally, the more I think about it, the more I think it would be good for Mexico if the United States did eventually find a spot in Russia 2018.

Did you watch 'The Devil Wears Prada' yet? #AskCesar

Did Xolos inadvertently upgrade at CDM by bringing in Damián Musto when Guido Rodríguez left? #AskCesar

Although I believe Guido had a bigger presence defensively with his interceptions and tackles, Musto has proven to be better technically with his passing and dribbling. He also doesn’t collect the same amount of reds and yellows that Guido seems to never stop earning.

Musto has been great for Xolos over the past few weeks, but I think we will need to wait for the season to end to see if he was an upgrade or not over Guido.

Would you have Jesus Molina back in el TRI?

I would love to have at least one true defensive midfielder in the roster. I wouldn’t start him — and would still love to see more minutes for Edson Alvarez or Hector Herrera in that position — but Molina should at least be a backup option on the bench.

Will Syria pull off the playoff win? Will you quietly be hoping for a US loss to drop them into 4th? How charged would a US/Syria game be?!

I didn’t have a chance to watch the first leg, but the coupling of sports and politics definitely seems very complicated for Syria’s national team and its people. Without knowing much about the recent draw against Australia, I say Syria gets a win in the second leg.

Also, believe it or not, I am hoping that the United States pulls through and clinches an automatic spot for the World Cup. For the sake of possibly running into each other once again in the knockout round, I would love to see Mexico’s biggest rival avoid another obstacle like the intercontinental playoff and instead qualify directly for Russia 2018.

What are your thoughts on the belgium game? Would a win/draw give you confidence going into the world cup?

Mexico needs more games like this. It’s nice to see El Tri regularly in the United States, but in order to help the national team grow, Mexico MUST play more friendlies outside of the CONCACAF region. For better or worse (probably worse), Mexico’s ongoing contract with SUM unfortuantely means that El Tri will still play plenty of games over here in the U.S.

Looking at the upcoming games in November, a win over Poland or Belgium would be the perfect boost in confidence for JCO and his roster. If Mexico is hoping to gain some success next summer, proving that it can keep pace with a team like Belgium is a step in the right direction.

A little early but as of right now, who's your starting lineup vs Belgium?

If I was coaching Mexico, here is what I would like to see. 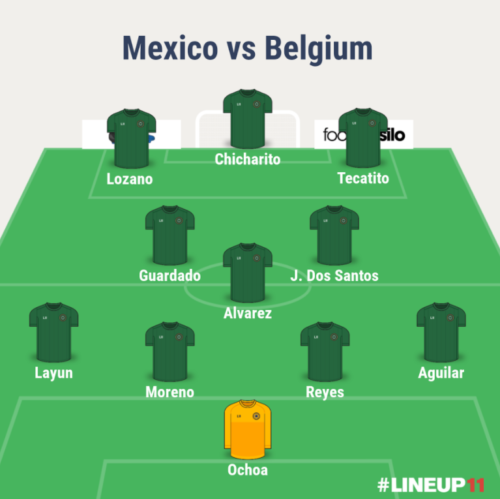 I’m obviously not in charge, so this is what I imagine JCO might do. 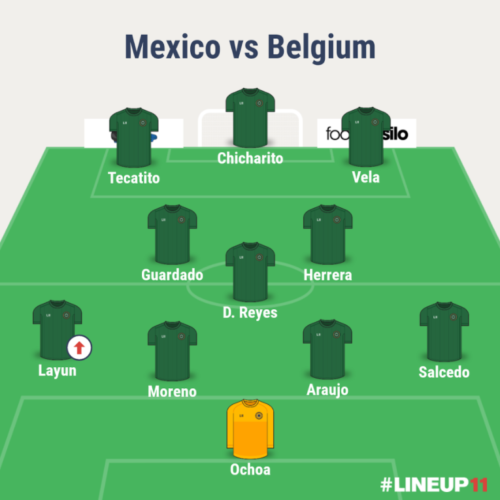 I’m not sure what either of those are, but Mazinger Z sounds dope so I’ll stick with that one.

What does the guy yell whenever a game ends on Univision Deportes? Pelotaaaaa nooooo ruedaaaa maaaaas or something.

Y LA PELOTA NOOOOOOOOOOOO RUEEEDAAAAA MAAAAAAAS. That’s Pablo Ramirez basically saying that the ball is not rolling anymore, indicating that the match is over.

would you like to see other players called up for friendlies next month, or same 23?

I don’t think we will see it, but I would love to see a few more young players given a try. Options like Rodolfo Pizarro or Omar Govea. An older name that I think should be in the roster, but isn’t, is Paul Aguilar.

There's a decent chance Argentina won't qualify. How would you react to a Messi-less World Cup?

No Messi at Russia 2018 might suck, but I would love to see it happen just so I can watch the reaction from the soccer world. I’m not too bothered by it.

Do you expect Osorio and co to solidify their current team play or can you see them working out the kinks in these few remaining games?

He might work out some kinks with a strange lineup today, but starting next week, I wouldn’t be surprised if he starts to finalize his gameplan and best starting XI for Mexico.

How will conmebol qualifying end? pic.twitter.com/dAq0iP9lur

Updated CONMEBOL standings and SPI projections. This is nuts. pic.twitter.com/roIlMD3l5U

Favorite Wrestler of all time? #AskCesar

I sometimes watched wrestling during elementary school and junior high, but that was mostly because all of my friends were extremely into it. I didn’t really care that much but I always thought Mankind was super cool. Actually, anything Mick Foley did was really cool.

also how much better is Bret Hart than Shawn Michaels? Thanks #AskCesar

who and the what

Also why is Shawn Michaels the GOAT? #AskCesar

what and the how

Is Nick Folk karma for the Bucs clowning Aguayo #askcesar

I guess this is the part of #AskCesar in which I genuinely have no idea about the questions. I should watch more wrestling and the NFL.