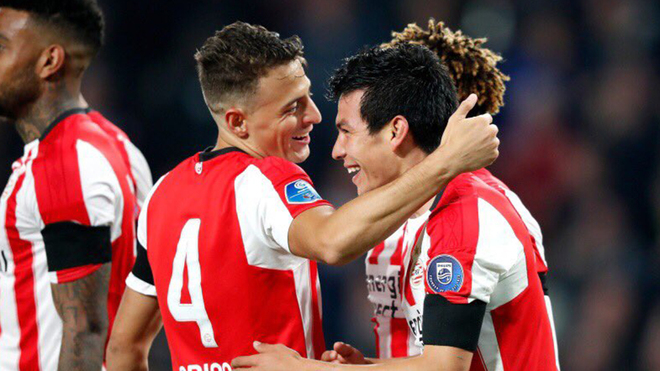 ‘Chucky’ With The Brace!

Hirving ‘Chucky’ Lozano cannot be stopped. In PSV’s 4-1 victory against Willem II, ‘Chucky’ scored two goals for the club, one in the 49th minute and another in the 58th. The Mexican striker has proved himself a worthy addition to PSV, finding the right place at the right time and exposing the weaknesses of the opposition’s defense. His time in the Eredivisie has gone well and at a young age, proves to be a solid foundation should he look to go to another European league in the foreseeable future.

For now, PSV is helping him grow and his call-up with the national team will be one that he returns to with confidence.

It’s my favorite segment: Mexican Abroad Showdown! This time it was Real Betis’ Andres Guardado taking on Real Sociedad and Carlos Vela. Only Guardado started the match (Vela would be subbed in at the 70th minute) and played the full duration. The optimism surrounding Guardado’s return to La Liga has not worn off and his two assists during the match on Sunday only made the feeling stronger. His pass to Joaquin Sanchez in the 46th minute is the sort of play that only he can create and why he is an essential addition to Real Betis.

As captain of El Tri, his confidence must be high and right now, nothing seems to be stopping him.

West Ham was victorious in their Premier League match against Swansea City but from an individual standpoint, ‘Chicharito’s’ having difficult getting a rhythm going with the rest of his team. Throughout the match, ‘Chicharito’ would try to check into the ball and look for the open space to get the pass but nothing would come his way and his substitution out of the match in the 78th minute even made the fans unhappy.

He currently has three goals this season and him playing in a competitive level like the one in England is worthwhile. The need for a little more collaboration with his teammates will make all the difference.

Despite there being four Mexican players with the Portuguese club, it’s been mostly Hector Herrera and Jesus ‘Tecatito’ Corona who have been given the most minutes. But that changed during Porto’s Champions League Group Stage match against Monaco, when by the 86th minute, all four players (Miguel Layun and Diego Reyes being subbed in) were on the pitch and playing. The Monaco match ended in a 3-0 win and three points were secured. Three out of four players were included in Porto’s match against Sporting (Diego Reyes did not play) but with the international break among us, all four players will have a chance to showcase their part with El Tri.

Raul Jimenez Up and Down

Benfica had two matches last week and striker Raul Jimenez was given the start in both of them. However, the result in both matches did not help Jimenez’s current journey with the club. The first match against FC Basel as part of the UEFA Champions League Group Stage match ended in a 5-0 victory for Basel and left a shred of doubt in how far the club will go in the rest of the tournament. The 1-1 draw against Maritimo on Sunday continued the dragging on of Benfica’s performances.

Luckily, Raul Jimenez has been called up with the rest of El Tri to participate in the upcoming qualifiers and the starts he got this past week will definitely benefit him regardless of the score lines.

Rangers On The Right Track

Rangers FC took on Hamilton this past Friday in a 4-1 victory and while only Carlos Pena was given the start for our Mexicans in Scotland, the time that both he and Eduardo Herrera have been receiving should pay off. Both have had their share of goals with the club, have finally begun to get consistent minutes and the team itself currently stands in 3rd place in the Premiership table.

Neither one was called up for the upcoming qualifiers but given Mexico’s already qualified position, their time would be more beneficial gain strength in Europe.

The Los Angeles Galaxy are officially out of the playoffs for the 2017 MLS season, leaving both Giovani and Jonathan Dos Santos without competitive play (unless a possible loan comes around) for a few months. LA Galaxy’s past two matches between Houston Dynamo and Real Salt Lake saw a level of performance from both brothers that had faded away for a while. Jonathan was working hard to get the ball and make hopeful plays by touching it into open spaces. Gio was taking his striker position with a more focused attitude. Still, Gio’s inclusion in the qualifiers leaves questions in the minds of those who believe his performance has dropped dramatically. Jonathan has the Confederations Cup performance to defend his international capabilities but for both players, the matches with El Tri will be instrumental considering the failure to go beyond the season play with their club.