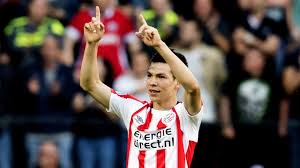 Despite not being in Mexico, our Mexicans Abroad have done what they can to send their love and support for all those currently affected by the earthquakes that hit Mexico last week. ‘Chicharito’ and Layun have started a charity initiative. And if you would like to donate to any causes, please watch the video below.

Monday’s match against Levante was another victory for Mexican midfielder Andres Guardado and his Spanish club, Real Betis. The 4-1 win proved why Real Betis is currently in 5th place in La Liga. The team has been nothing short of dominant, four victories in give games, including a stunning 1-0 win against Real Madrid. Guardado has been a strong asset for the club, providing fluid passes within the middle. His return to Spain was highly anticipated and he hasn’t disappointed.

Lozano Finding His Groove in Europe

Hirving ‘Chucky’ Lozano’s entrance into the Eredivisie has been seen as the right start for a European career and so far he has lived up to the expectations. He scored yet another goal for the club, this time against Utrecht in PSV’s 7-1 victory on Sunday, scoring in the 40th minute and giving an assist in the 49th minute. He started and played the full duration of the match. PSV is currently in first place in the Eredivisie and with another international break coming up, Lozano is on the right track.

In a rollercoaster of playing time and starting positions, the Aztecs at Porto had a positive day against Portimonense on Friday. Both Jesus ‘Tecatito’ Corona and Hector Herrera were given starting positions for the match while Diego Reyes was subbed into the match at the 74th minute. The goalscoring for Porto started early, with Ivan Marcano opening up the goals in the 20th minute. Another two came three minutes apart, including one that was an assist from ‘Tecatito.’ Portimonense managed to get two goals in during the duration of the match but Porto did not hold back and ended the match in a 5-2 victory.

Miguel Layun did not play that match but was subbed into Porto’s Champions League match against Monaco on Tuesday. He scored in the 89th minute and contribute to their 3-0 victory.

The first couple weeks in Scotland for Carlos Pena and Eduardo Herrera started off slow but have now begun to pick up. The match against Partick Thistle on September 19th saw both players getting goals and although the match against Celtics Saturday morning ended in a 2-0 loss, Carlos Pena was once again in the starting XI and Eduardo Herrera was subbed in at the 73rd minute.

This upward mobility of improvement is exactly the kind of progression those who move abroad need to better their play. Scotland is not the ideal location for Europe but for Herrera and Pena it’s the perfect starting location if they wish to move to a better European league in the future.

Javier ‘Chicharito’ Hernández has been assigned to different positions than he is used to on the field and last week, did not start for West Ham. But on Saturday, ‘Chicharito’ was back in the starting lineup and was given his usual position up top. The game would end in a 3-2 loss for West Ham but not without some excitement. After Tottenham’s Harry Kane scored two goals within four minutes of each other in the first half and Ericksen in the 60th minute, ‘Chicharito’ would respond with a strong header of his own in the 65th minute. West Ham would fight hard after that first goal and Kouyate would score in the 80th minute. The determination did not lead to victory but it did prove once again that ‘Chicharito’ is a valuable asset to the English club.

The LA Galaxy lost their third match in a row this past weekend against Sporting Kansas City. This leaves the club and its Mexican players, Jonathan and Gio Dos Santos, with a very slim chance of reaching the playoffs for this season. Their upcoming match against the Houston Dynamo is a must win and would be the defining factor in the already nearly impossible chance the team faces.

For both Mexican players, this adds salt to an already open wound when it comes to the way they have handled their club careers. While Gio’s performance has slowly declined overall, Jonathan’s performance during the Confederation Cup gave hopes for a positive pathway. Instead, he opted to move to Los Angeles instead of staying in Europe. His international play did not seem affected during Mexico’s last qualifiers but the idea that two of Mexico’s key players might not be playing competitively until March does raise red flags.