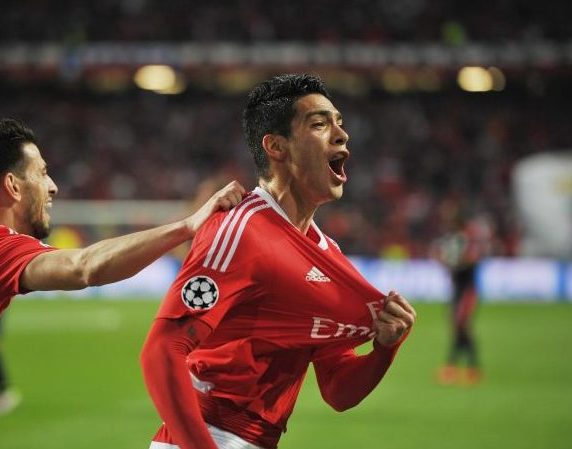 In Benfica’s match against Rio Ave, Mexican striker Raul Jimenez was given the starting position and played the full 90 minutes which was a breath of fresh air considering the last couple of games have been merely late-game substitutions. A win for Benfica was crucial with the Portuguese club neck and neck in the league with rival club Porto. The savior of the match would be Raul Jimenez, who in the 75th minute was given a great ball by Salvio inside the box and would calmly pass the ball away from the keeper and into the back of the net.

Raul Jimenez’s goal could not come at a perfect time. For one, it all but secures Benfica’s spot on top the standings with a five point lead ahead of Porto (73 points) with 78 points. And, with international games only a few weeks away, the Mexican striker will surely be in a confident place.

⚽GOOOOAAAALL! ?? for #Benfica!!
We sure needed that. Luckily @Raul_Jimenez9 kept his cool

Now onto the next… pic.twitter.com/GjTdlgIQf8

Carlos Vela started and played the full duration of the match in Real Sociedad’s match against Sevilla. The game was intense from the very beginning with fouls from both teams, including one to Vela, that resulted in plenty of cards. Sevilla’s Sarabia scored in the 41st minute and added greater intensity to the game. Vela would help Real Sociedad secure the point by scoring the equalizer in the 61st minute by staying committed to getting the ball inside the box.

Vela has always been standoffish about his commitment to El Tri but his performance in Spain has been primarily positive. He would definitely be a figure that should be seen during the Confederations Cup over the summer.

Fifth place Villarreal took on first place Barcelona. It was Jonathan Dos Santos against Luis Suarez, Lionel Messi and Neymar. Barca would start the goal scoring early as Neymar would find a way to find open space inside the penalty box and score in the 21st minute of play. Villarreal’s Bakambu would give the Spanish club some hope by equalizing the match in the 32nd minute. However, Barca found their rhythm and MSN proved unstoppable. Messi would score in the 45th minute, Suarez in the 69th and Messi against in the 82nd. Despite the loss, Jonathan’s playing time is once again the most beneficial. Going head to head against some of the biggest names in soccer is always great practice for international play and being part of one of the top 5 teams in a prestigious league is not bad either.

Ochoa Has Too Much To Take On

Unlike Jonathan, whose head to head against a big team was a test of his skill, Ochoa’s latest match against Real Madrid only highlighted the lack of help he receives from his team. In Granada’s 4-0 loss against the 2nd place team in La Liga’s Primera Division, Ochoa and his defense was immovable against second string players. Both James Rodriguez and Alvaro Morata were able to get two goals during the match and all within the first 45 minutes of play.

While Granada’s future in the relegation zone in set, Ochoa has a brighter horizon. Only time will tell which direction he chooses to go.

Eintracht Frankfurt lost 2-0 in their Bundesliga match against Wolfsburg. Marco Fabian would receive the full 90 minutes of play but his presence was dimmer than his recent matches. Wolfsburg picked up the a little later in the much, scoring their first goal in the 48th minute. They would go on to secure their victory in the 63rd minute despite Eintracht Frankfurt having the majority of the possession.

Fabian might not’ve scored a goal but his inclusion in the roster still shows the momentum hasn’t died out yet. Perhaps another goal in the near future could determine whether he’s a definite starter here in the US tournament or flying overseas as a reliable substitute.

PSV took on Groningen on May 7th in a regular season Eredivisie match where Hector Moreno and Andres Guardado were given the starting positions. The goalscoring began early during the game with Groningen’s Mahi scoring in the 11th minute. From that point, the game slowly began to lose momentum and both teams remained cautious. However, in a weekend full of equalizers, PSV was able to get the 1-1 draw when Lammers scored in the 59th minute.

PSV currently sits in third place and both Mexican players have stayed comfortable in their starting positions. While the Eredivisie is not the most competitive of the European leagues, the confidence both players will have coming back to El Tri should serve as proof the team is treating them well.

Espanyol was able to be victorious against Deportivo de La Coruna on Sunday in a match that ended 2-1. A poor defensive error left Espanyol with the lead early as Leo Baptistao scored in the 11th minute. Espanyol’s second goal would come soon after as Gerard Moreno would score 29th minute. Deportivo would get a goal of their own in the 47th minute but by then, Espanyol had already secured their victory.

Diego Reyes got the full 90 minutes of the match and was very effective at keep the defensive side clear. Being a Europeo who consistently gets playing time should be highlighted during international play coming up. It’ll be important for the national team to have confidence in the back, a position that has been Osorio’s biggest flaw according to critics. Both he and Reyes will need to shut those critiques down.

Porto’s match against Maritimo ended in a 1-1 draw. The game lacked momentum as well as its fair share of Mexican players. Hector Herrera started and played the full 90 minutes. Jesus ‘Tecatito’ Corona was subbed in during the 70th minute. Miguel Layun did not play nor was he benched.

This absence of playing time comes at a very unfortunate time for the PoTRI. Hector Herrera has been given the majority of the playing time but his performance in the midfield lacks motivation. Layun had vanished from the team’s roster altogether and Tecatito has not been given enough chances to highlight his skills for the midfield. It is going to be tough for the team to adjust back to international play.
Not Featured: Javier ‘Chicharito’ Hernandez; benched (Bayer Leverkusen 1-1 Ingolstadt)