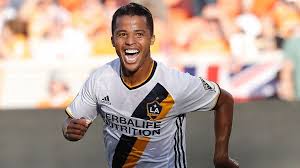 Mexican international and Galaxy striker Giovani Dos Santos ended his seven game drought on Saturday when he scored the equalizer for his club against Chicago Fire.

The goal came in the later part of the game when the Galaxy began fighting hard in the second half the match. The team ended the first half with a 2-0 deficit and needed some motivation to not recreate their match against the Seattle Sounders that ended in a 4-0 loss. But Galaxy was able to turn things around when Daniel Steres scored a strong header in the 56th minute of play.

Then, to kill two stones with one bird, Giovani Dos Santos was able to catch a deflection off a header from his teammate and was able to get the ball into the corner of the net in the 65th minute of play. He was able get his first goal since the opening season match against FC Dallas and save his team from another loss at home.

Gio had been confident in himself despite the drought. In last week’s game against Philadelphia, he had mentioned “good things” would begin to come for him.

However, the excitement that jumped from him as he got up from the ground and proudly hit the Galaxy crest proved weight had been lifted off his shoulders.

Watch highlights from the match here: