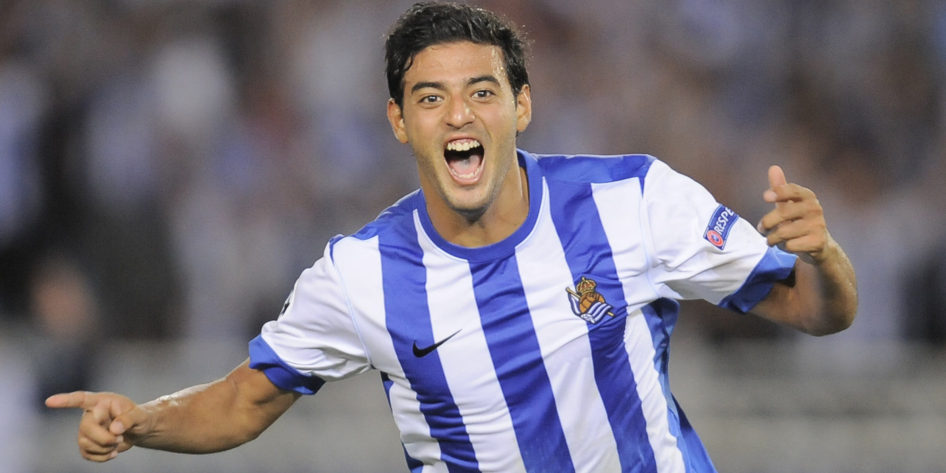 In the latest edition of “Mexicans Abroad Showdown,” it was Carlos Vela’s Real Sociedad against Guillermo Ochoa’s Granada for a regular season match in La Liga. The match highlighted the continuous defensive faults Granada has and when Carlos Vela scored in the 45th minute being left alone inside the box with three defenders surrounding him, Ochoa was once again left alone to unfortunate be nutmegged in the process. Granada would attempt to equalize in the 65th minute but Real Sociedad would achieve the 2-1 victory with a goal by Juanmi in the 84th minute.

The goal for Vela puts him in a great position with only a few weeks before Mexico vs. Croatia on May 27th in Los Angeles to be in Juan Carlos Osorio’s radar. As for Ochoa, the loss against Real Sociedad officially relegated Granada out of La Liga’s Primera Division. This will unlikely hurt his chances for international call-ups but does leave him with questions about if and where his next step should be. Head back Liga MX? Stay in Europe? Or give MLS a chance? Should be an interesting summer for him.

Jonathan Continues to Excel for Villarreal

Fifth place Villarreal took on Sporting Gijon over the weekend and came out with a 3-1 victory. Midfielder Jonathan Dos Santos was given the starting position and played the full duration of the match. He added more stats to his resume by giving a strategic through ball to Bakambu in the 47th minute of play that increased Villarreal’s lead. The victorious game also highlights Jonathan’s strengths with the club. With evidence on the field showing he is an asset for the club, Juan Carlos Osorio would be foolish not to consider the Mexican midfielder for the upcoming game later than month as a starter as well a definite ticket to Russia for the Confederations Cup.

Porto’s 2-0 victory against Chaves was not equally shared with the Mexican players on the team. Jesus ‘Tecatito’ Corona was given the starting position and played until the 66th minute of the match. Hector Herrera was subbed in during the 81st minute and Miguel Layun was not even benched. The Mexican players are slowly fading away from Porto’s radar and much like Ochoa in Spain, it might be time for the Aztecs to go their separate ways.

Ninth place Espanyol and its defender Diego Reyes took on first place Barcelona and the striking squad of Lionel Messi, Luis Suarez and Neymar. Espanyol came out strong, having a few chances themselves inside Barcelona’s box in the early minutes of the game. But a bad back pass from Espanyol led to a 1 v 1 between Suarez and Diego Reyes that unfortunately Suarez was quick to take advantage of and was able to score in the 50th minute. From that point, Espanyol’s defense was exposed. While trying to stop Messi from getting past their wall, Diego Reyes slipped and the defense left Ivan Rakitic open to tap the ball across the keeper to the lower right corner. Another mistake from Espanyol’s defense, this time a clumsy Aaron Martin would fail to successfully settle the ball which landed right at the feet of Luis Suarez who simply placed it in the back of the net.

Diego Reyes consistently gets playing time with Espanyol and that should definitely be noted. A team like Barcelona is also difficult to completely judge his performance throughout the season but the little mistakes that happen from game to game could potentially hurt on the international level as well, where the risks will be higher for Reyes.

Eintracht Frankfurt took on Hoffenheim over the weekend in a regular season Bundesliga match. Despite not scoring this game, striker Marco Fabian was able to get the starting position and play the full duration of the match. Eintracht Frankfurt was denied a goal in the 53rd when Abraham scored a goal off that ricocheted to him after Marco Fabian attempted a shot inside the box. The game remained leveled at zero until Hoffenheim’s Hübner was able to score a last minute header in the 90th minute that gave Hoffenheim the 1-0 victory.

Fabian might’ve not scored a goal or led his team to victory this past weekend but his sudden rise in the Bundesliga with Eintracht Frankfurt comes at a perfect time for him. With international play just around the corner, Juan Carlos Osorio will have another possible candidate to look at for the upcoming tournaments in the summer. Most likely for Fabian given recent performances, that would mean a spot in the Confederations Cup.