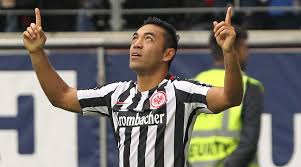 If there was any more questioning about whether or not Marco Fabian has fully recovered from his injury, he silenced his critics during Eintracht Frankfurt’s match against FC Augsburg. Augsburg got the lead early in the 9th minute when Gouweleeuw scored off a chip shot. Then Marco Fabian was able to rescue his team from a possible loss by scoring two goals in less than 10 minutes. Both goals showed commitment from Fabian, as they first were deflected that led to him coming back for his goals.

On Tuesday’s match against Monchengladbach went to a 1-1 tie where Fabian was able to help his team get the win in a penalty shootout that helped Eintracht Frankfurt secure their place in the DFB Final.

Marco Fabian has exceeded expectations. He’s been declared Player of The Week for three weeks in a row, has seven goals and four assists this season. As summer quickly approaches, Fabian has lots of eyes on him.

Jonathan Gets An Assist

Jonathan Dos Santos started and played the full 90 minutes in Villarreal’s match against Leganes. In the the team’s 2-1 victory, Jonathan Dos Santos was able to help striker Bakambu secure a brace by providing an assist at the end of the match. The cross from the left side not only got Bakambu the brace but secured Villarreal the victory.

Villarreal was also able to get a great victory against Atletico Madrid on Tuesday. Jonathan also getting consistent playing time as a midfielder is essential for his performance as well as getting prospects from future clubs. More importantly, with summer coming up, it might be what make Osorio choose him for Confederations Cup or for Gold Cup.

Ninth place Espanyol took on 3rd place Atletico Madrid on Saturday in a regular season Primera Division match. The game ended in a 1-0 loss for Espanyol but not without a fight. The team provided aggressive counterattacks to Atletico Madrid’s defense, having a few close shots on goal. Defensively, Diego Reyes and the rest of his line in the back tried as much as they could to keep Griezmann and Fernando Torres out of the box. It worked for most of the match until Griezmann managed to get a goal in the 73rd minute. Diego Reyes’ progress is hard to pinpoint at times. He isn’t judged as a forward who score goals but can’t be judged by the goals scored on the team because he is not the only defender in the back.

He can, however, be judged on his playing time which is some of the highest minutes than any of the other Mexicans Abroad. Couple that with being in La Liga where he’ll at times face Griezmann, Ronaldo or even Messi, and the quality of play he gets from all his appearances is measured at a higher level. Now it just needs to translate to the national team as well. (Espanyol also tied against Sporting 1-1 on Tuesday).

Andres Guardado and Hector Moreno were both given the starting positions and the full 90 minutes in PSV’s match against Ajax. The match ended in a 1-0 victory for PSV, keeping them in second place in the Eredivisie. There’s been some speculation in regards to the Mexican players and the level of competition they face in the league. Compared to the Aztecs in La Liga, some would say the two have it easy in the Netherlands. However, the confidence both players have is important because their attitudes will transcend out of the Netherlands and into their international play.

If it doesn’t and they fail to meet expectations in the Confederations Cup, going to another league might benefit them.

Vela was subbed out in the 73rd minutes. Much like Reyes, Vela getting consistent playing time in a competitive league is only positive for him. As a striker, he will need all the playing time he can get in order to make himself a competitive candidate for Osorio’s squads that will be playing two tournaments over the summer.

Real Sociedad is currently in 7th place in La Liga.

Ochoa’s Team On Edge of Relegation

Granada gonna Granada. The goalscoring in the 2-0 defeat against Sevilla came early for the defense and Guillermo Ochoa. In just the fourth minute of play, Paulo “Ganso” Enrique managed to squeeze past the defense and put it in the back of the net despite a deflection from Ochoa. “Ganso” would also slip past Granada yet again in the 46th minute when a ball that was centered inside the box and “Ganso” just tapped it in. There were more goals that Granada scored that were marked offsides but the unfortunate circumstances Ochoa finds himself with his club have not gotten any better. During their match against Malaga on Tuesday, Granada also lost 2-0.

The thought of relegation is highly likely and Ochoa might need to start thinking of heading in a new direction.

Porto Continues to Go Without The Three Amigos

Porto’s 0-0 draw against Feirense left all three Mexican players out of the starting 11. Miguel Layun was on the bench but did not play while Hector Herrera was subbed in at the 66th minute. This has been an unfortunate time for the players at Porto. Things need to start getting better at the club or each player should begin to go their separate ways to better clubs.

Jesus ‘Tecatito’ Corona was injured and missed the game against Feirense.