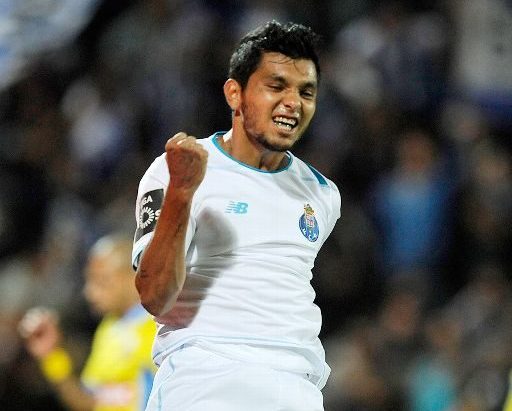 ‘Tecatito’ With a Possible Transfer

Porto took on Braga over the weekend in the Primeira Liga in a match that resulted in a 1-1 draw. Miguel Layun was not featured in the starting 11 nor was he a substitute. Hector Herrera and Jesus ‘Tecatito’ Corona were benched for the game and made late substitutions in the second half. ‘Tecatito’ would be subbed in during the 55th minute while Herrera was subbed in at the 88th minute. ‘Tecatito’ additional minutes were beneficial as he was able to create plays and effectively make passes however the main focus surrounding the Mexican midfielder that day involved a seat. In a violent attempt by some “fans,” ‘Tecatito’ had a stadium seat thrown in his direction which he played off by casually throwing the chair off the field and calling for the pass along the outside of the field.

Rumors have also circulated this week that German soccer club, Borussia Dortmund, is interested in signing the player. The Bundesliga has been friendlies to Mexicans Abroad, with Fabian and Javier ‘Chicharito’ Hernandez there, and a big club signing ‘Tecatito’ would benefit him tremendously.

Fabian Gets Another One

Mexican striker Marco Fabian was able to get his team’s only goal in Eintracht Frankfurt’s match against Borussia Dortmund on April 15th. Despite the 3-1 lost against the big German club, Fabian was able to score a fantastic goal in the 28th minute of play outside of the 18-yard box.

Eintracht Frankfurt is currently in 10th place with 38 points.

Mexican striker Carlos Vela took on the powerhouse that is Barcelona in Real Sociedad’s match on April 15th. Vela would get the starting position before being subbed out in the second half. Despite Barcelona’s star Lionel Messi scoring in the 18th minute, Real Sociedad held their own and even got two goals in their 3-2 loss. Carlos Vela and the rest of the offense helped continue putting pressure through the majority of the game which not only showed strength from Real Sociedad (who is in 7th place) but also confidence for the striker in his level of play against a tough team with remarkable players that is currently in second place.

Hector Moreno and Andres Guardado were both given the starting positions and played the full 90 minutes in PSV’s match against Den Haag on April 15th. The game ended in a 1-1 draw where PSV had the lead earlier in the 7th minute with a goal from Propper but were unable to keep the lead.

Guardado and Moreno consistent good performances might seem mundane to some and might also draw critiques in regards to the level of play they are actually receiving in the Eredivisie league. However, the number of minutes they receive game after game and the momentum they have been able to both give with assists or goals (especially for Moreno) provides confidence that is needed when they get back to the national team.

In case you were wondering, @AGuardado18 is having another great season in the Eredivisie. [via @WhoScored] pic.twitter.com/ceOBqwpYDQ

Espanyol’s match against Leganes on April 15th ended in a 1-0 victory for Reyes’ team and it allowed for the Mexican defender to continue his streak of not only starting the match, but playing the full 90 minutes. Reyes is not at the level of caliber when it comes to defenders as Hector Moreno or Rafa Marquez are like Moreno, the time he receives week after week greatly benefits him from a club and international level. A defender is judged differently and perhaps it is not as easy considering they are not often scoring goals the way strikers are but his growth is necessary. With Espanyol, he seems to be consistently growing.

Granada unfortunately lost another match this past weekend against Celta De Vigo. The 3-0 loss has been a tragic consistent for Europeo Mexican Guillermo Ochoa whose club is in danger of being relegated as they currently stand in 19th place. Ochoa has been vocal about his lack of regrets heading to Europe because it took him out of the bubble that is Liga MX but certain stats do not help his cause. He currently has conceded more goals than any other keeper in Europe’s top five leagues. If there was a moment when he should consider a transfer, especially since Granada just got a new manager, soon would be better than later.