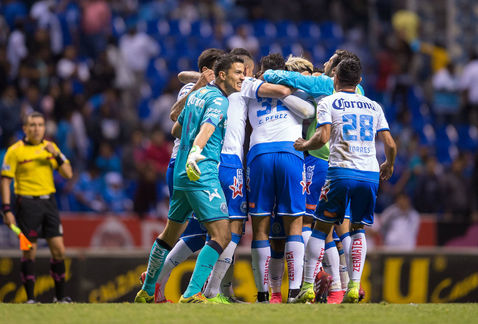 With just three games remaining, things are really hotting up in Liga MX. As ever, Tom Harrison’s weekend review has all the results, headlines, analysis and the golazo.

Did you miss any of the games from #J14CL2017 ? Here is the full list of results. Happy with your team's performance?#LigaMXEng pic.twitter.com/PH40gyy69H

Jornada 14 was a crucial one in the tight relegation battle. All of the bottom four; Veracruz, Chiapas, Morelia and Puebla played home matches, with Chiapas the only team facing a team currently in the top-eight.

Chiapas were the first side to play this jornada, in Saturday’s early kick-off. Sergio Bueno left some notable names on the bench, including Dieter Villalpando and Matheus Goncalves, and Los Jaguares started poorly.

However, they managed to go into the break one-nil up, scoring the only shot on target all half. A superb goal, Félix Micolta rounded Gibran Lajúd after a mazy run and clever one-two with Luís Leal.

With 63% possession and 12 shots on goal, Chiapas were much better in the second-half, but Tijuana went away with all three points. Avilés Hurtado took full advantage of a horrible Moi Munoz error, before Juan Lucero finished off a swift counter.

If you're Aviles Hurtado you catch them building from the back, you take the ball and score the equalizer #LigaMXEng pic.twitter.com/FUcEccPDEn

Morelia and Veracruz were next to play, in simultaneous kick-offs.

Morelia quickly fell a goal behind, as Elías Hernández continued his great run of form, grabbing his fourth goal in four games.

At Estadio Luis de la Fuente, Veracruz were on top form, throwing everything at Necaxa’s goal. The danger with pressing for a goal is that you’ll over-commit and get caught on the counter, and this is exactly what happened to Veracruz. Fabián Espíndola was fouled in the box and Edson Puch’s 65th minute ‘Panenka’ gave the visitors the lead.

This Edson Puch panenka has given Necaxa the 1-0 lead at the "Pirata" in minute 64. ? #LigaMXEng pic.twitter.com/AGKPbVJdnf

Ten minutes later, Morelia went two-nil down. Andrés Andrade latched onto Alex Mejía’s through ball and finished from an inside-right position. La Monarquía quickly halved the deficit though, substitute Gastón Lezcano tapping in from a corner.

Cue desperate attempts to find an equaliser in both matches. León and Necaxa held firm though, meaning the bottom three in the relegation battle all slipped-up in winnable home games.

Puebla kicked-off on Sunday evening knowing a win would move them seven clear of Veracruz, but got off the worst possible start. Just five minutes in, Rafa Baca started and finished off a wonderful move which involved a great cross by Ángel Mena.

José Cardozo’s men fought back in the second-half though, and won the match thanks to an own goal and a last-minute strike from Gabriel Esparza. The late goal triggered wild celebrations at Estadio Cuauhtémoc, and effectively secured Puebla’s place in Liga MX next season.

Veracruz, Chiapas and Morelia face a nervy run-in, with just a single point separating the sides.

Dull, but highly effective. Ricardo La Volpe deserves plenty of praise for the success he’s having with a far from intimidating América squad.

Remarkably, Las Águilas kept their sixth clean sheet at Estadio Azteca in a row on Saturday night, as they shut out Querétaro.

Silvio Romero was the hero on Saturday. The Argentine instinctively dinked the ball past Tiago Volpi when possession fell to him inside the box. Romero has been guilty of missing chances for much of the season, but 12 goals for the 2016/17 season isn’t a bad tally. In fact, it’s level with Oribe Peralta.

How do you beat Tiago Volpi? According to Silvio Romero, you just chip him. And that's America's HT lead. #LigaMXEng pic.twitter.com/DbLw0yUCW7

Defence has been the key to América brilliant run of form though. If Agustín Marchesín and co can continue the run of shut outs, La Volpe’s side will be very tough to beat in liguilla.

For much of this season, León have been very poor. Javier Torrente’s side have often been outplayed, looked short of ideas, and the Argentine coach has struggled to find his strongest line-up.

Victory at Tigres gave La Fiera a major boost though, and they’ve won two of their three games since.

During the latest victory, at Morelia, the style of play which made León so successful during the Apertura was once again on show.

León’s two goals were perfect examples of how their direct tactics can work.

The first was a perfect Torrente goal. After winning the ball on the halfway line, León quickly moved it forward and penetrated the Morelia defence before they had a chance to organised themselves. Elías Hernández made a great run and finished off a highly successful transition.

The benefits of winning the ball back high up the field. Great run, through ball and finish too. https://t.co/nFpfGiL5zD

Andrés “Rifle” Andrade set-up Elías’ goal, and scored the second as he got in-behind the Morelia back line from Alex Mejía’s lofted through ball.

León are four points off the play-offs, but still have a slim chance of making another late charge for liguilla. If they continue to successfully pull off the Torrente style, as they did against Morelia, the seemingly impossible might just happen.

Pumas played right into the hands of Tigres

In order to sneak into liguilla, Tigres needed more sides to play like Chivas did against them. When teams sit deep and compact, Tuca Ferretti’s side struggle to score goals. But when opponents come at them, and open up the match, Tigres’ star-studded attack are able to show their quality, and tear defences apart.

Pumas came at Tigres, which backfired dramatically. Paco Palencia’s side managed more shots than Tigres did on Saturday, but like the liguilla quarter-final, Tigres made the most of spaces left for them in the final third, and thrashed Pumas four-nil.

Easy to look good against a Pumas side that's been open and gifted space all game long. Different story when they play compact sides. https://t.co/1lxS2piBby

With space to play in and fewer defenders to beat, as Pumas committed men forward, Tigres’ attack was far too good. Eduardo Vargas has been rather disappointing in Liga MX so far, but created tons on Saturday. Jurgen Damm took the headlines though, as he scored twice from the bench.

There’s no evidence that Tigres won’t struggle again if they play a well-organised side that defend deep and compact, but if their remaining opponents come at them, Tigres are likely to sneak into the play-offs.

César Montes had a difficult opponent to deal with on Sunday, Fernando Uribe. With a blend of intelligent movement, physical presence and lethal finishing, Uribe is one of the most dangerous strikers in Liga MX.

Aided by the non-stop movement of strike partner Gabriel Hauche, and vision of midfielders such as Pablo Barrientos and Erbín Trejo, Uribe was often fed through on Sunday.

However, the Colombian wasn’t able to find the back of the net, as Montes did a superb job.

Cesar Montes needs to be in the El Tri team pronto. Excellent display from the 20 year old so far. #ligamxenf

Montes snuffed out great shooting opportunities for Uribe on three occasions during the first-half, as the young Mexican displayed how good he is at reading the game and timing slide challenges, as well as his physical strength.

Juan Carlos Osorio has surprised many by not calling-up Montes yet, but with these sorts of performances, and two tournaments this summer, it surely can’t be long until César makes his international debut.

This goal by Felix Micolta has given Chiapas the 1-0 lead over Xolos at the half. Watch it again. #LigaMXEng pic.twitter.com/axiWnimHLm

Pachuca: Where Have All the Goals Gone?
Futbol Mexicano y Clausura 2017: Where to Watch Liga MX Jornada 15, Midweek Mayhem, and Ascenso MX Quarterfinals
To Top