If you haven’t had a chance to watch the video preview, you can check it out here. If you’ve already done that, let’s get started on this week’s #AskCesar!

@cesarhfutbol Pure excitement/entertainment wise, has this season been a bit disappointing to you?

I’m actually loving this season! With no team taking charge, it seems like anyone can win the title — which is saying a lot for a typically unpredictable Liga MX tournament. I guess it’s also hard to feel bored when I’m regularly covering Xolos, who seem to have plenty of high-scoring games.

@cesarhfutbol Does having 2 MLS team in the #CCL semis elevate the profile of the league even a little bit in the eyes of the Mexican supporter?

Ideally it should, but I don’t think the league will get much respect from Liga MX fans until an MLS side gets a CCL title. Perhaps what is needed is a team like the Galaxy or the Dynamo to win the title. If you have a Mexican star like Gio or Cubo lifting the trophy, that would definitely gain some immediate praise from fans.

And the most important one of all:
Corn or flour?

@cesarhfutbol when facing a line of riot police should you give them… ??? #AskCesar

Has anyone tried an agua de jamaica yet?

@cesarhfutbol Why did San Diego get screwed over hosting the Manchester Derby in the summer?

Current rumor is that they are moving it to Houston, if I remember correctly. Not sure why San Diego didn’t get it, would have been a perfect opportunity to show what an MLS team could provide out here.

@cesarhfutbol Since Libertadores is off the table (for now), should Liga MX consider awarding a CCL spot to the winner of Copa MX/SuperCopa?

I would be a big fan of that. Personally, I’ve never been that thrilled by the Copa MX as a fan, so I feel like there needs to be a big incentive there like a CCL spot if the Copa Lib issue for Liga MX clubs isn’t resolved in the future.

@cesarhfutbol What's the over/under on tacos and craft beers tomorrow for you?

I’ll just go with percentages here. Is that the same thing as over/under? I guess this makes it clear that I don’t gamble on sports.

If I wasn’t covering the Xolos game, that percentage for craft beer would probably be at a 99%.

@cesarhfutbol Best bet for the weekend?

Not a gambling man (as seen above), but I think Necaxa might be able to get a draw against the current champions, Tigres.

Recently retired, but it has to be Blanco. The intrigue and drama that surrounded him was so much fun to watch. That creativity was ridiculous as well. No one like him in the league and it might be a very long time before we get another player that’s similar.

@cesarhfutbol What's your starting XI for the confederation cup? #AskCesar 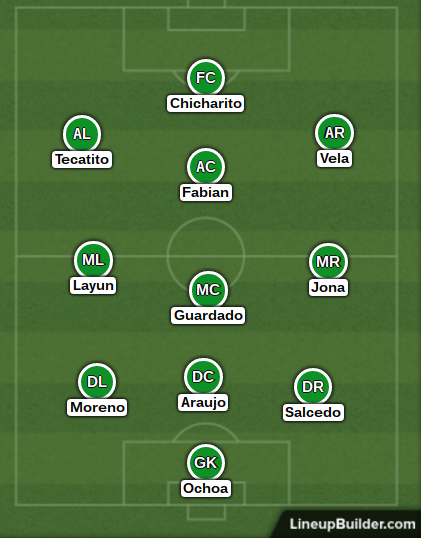 @cesarhfutbol Osorio is another 7-0 waiting to happen

Wait a second, that’s not a question!

@cesarhfutbol Do you think mexican players should try to play in the brazilian league if the price is right? Imagine Salcedo playing for Corinthians…

I’m unsure of that. If a Mexican player is looking to make a move back from Europe, he might as well go back to Liga MX. Worried about them losing relevance playing in Brazil.

Not sure why they wouldn’t. They don’t have any other competitions going on during the same time. Cameroon and Chile shouldn’t be taken lightly either in the Confed Cup.

@cesarhfutbol @FutMexNation #AskCesar what does A-P Gignac mean in the larger sense of European Internationals playing in N America?

I’ll tackle this from a Liga MX perspective.

Tigres, and Gignac, aren’t at their best this season, but his move to Mexico is still a significant one. After thriving in Liga MX, he was able to take part with France’s national team in last year’s Euros, which was pretty incredible to see. He’s an example of what certain players can achieve by joining the league.

It might be seen as a downgrade to leave European competition behind, but take a look at what happened with Andy Delort. He made the move to Tigres and couldn’t earn a starting role there. Instead, he had to go back to France where he has done well in Ligue 1. Obviously plenty of factors to consider here, but it’s interesting to note that a player who has scored four goals in Ligue 1 this year couldn’t find a key role for a Liga MX club.

Tigres are the most stacked team in Mexico, but it speaks volumes of the level of play in the league. MLS is undoubtedly growing as well and should also continue to attract European talent.