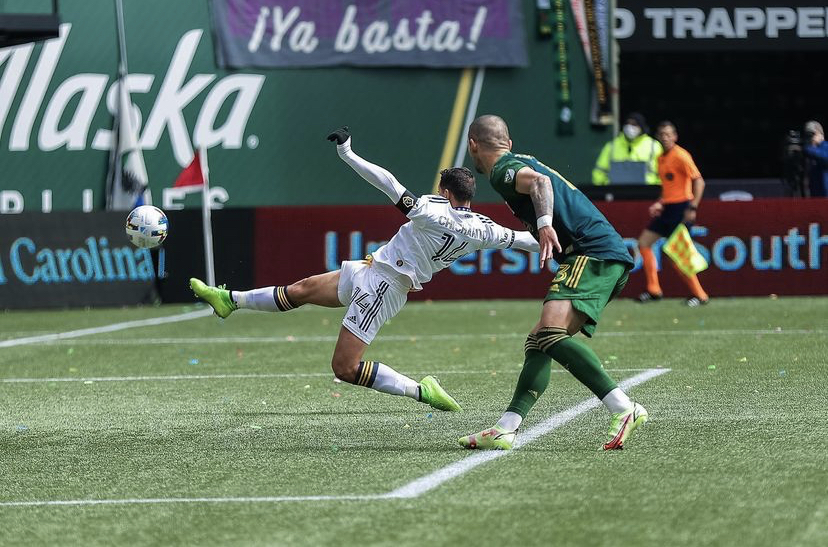 The big story in Week 5 of the MLS season is one we have heard before. While there was high scoring affairs all across the league, one player has continued his early season dominance.

Chicharito led the Galaxy to a 3-1 road victory over the Portland Timbers with two goals. He opened the scoring in the ninth minute punching a cross in with his outstretched leg. With no one marking him, he needed just one touch to find the back of the net. In the second half,  up 2-1 and with Portland down to 10 men, Chicharito closed the game out. Off a pass from left back Raheem Edwards, he struck the ball first touch and it slid to the far corner of the net. The two goals from Sunday give him four goals this season, tied for second in MLS.

Efrain Alvarez got his second start of the season and played 86 minutes. He has played all five games this season. As for Julian Araujo, he played 24 minutes off the bench. His first game off the bench this season.

The Galaxy are currently 3-0-2 and third in the Western Conference. Next week will be the first meeting with LAFC this season. Not just a clash of rivals, but two teams who are currently in the top three in the standings.

Vela and LAFC Win on Road

Carlos Vela played 74 minutes in LAFC’s 4-2 over Orlando City. Even without taking any shots, Vela’s presence was felt with an assist on the first goal of the game. At midfield, Vela found Chicho Arango at the edge of the box and he threaded a cross to Brian Rodriguez for the goal. It was his second assist of the season.

LAFC is currently in first in the Western Conference and will play the Galaxy on the road for their first meeting of the season.

Javier ‘Chofis’ Lopez missed his first game of the season as the Quakes tied Austin FC 2-2. The team remains winless on the year, currently 0-2-3.  Next week, they play the Houston Dynamo.

David Ochoa has yet to make his 2022 debut as Real Salt Lake tied the Colorado Rapids 1-1. RSL is 3-2-1 and in second place in the Western Conference. Next week, they play Toronto FC.