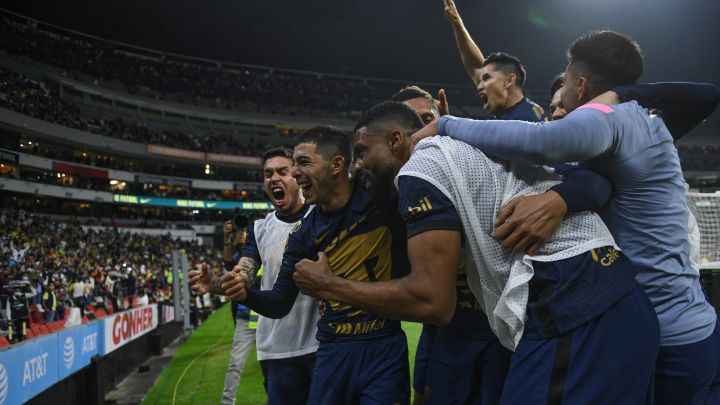 With the dust still settling after a wild weekend of Liguilla action, here are three big takeaways from the quarterfinals:

Although América’s quarterfinal elimination has been the center of attention, the spotlight should be firmly trained on their executioner. Pumas defied the odds once again with a superlative showing at the Estadio Azteca, and Andrés Lillini’s men will take some stopping on current form.

The former Academy Director deserves plenty of credit for his aggressive approach over both legs, and his decision to field winger Washington Corozo as an inside forward on Saturday night was a masterstroke. However, the success of his side has far more to do with mental toughness than tactical tweaks.

Los Universitarios could have crumbled after Emanuel Aguilera gave the hosts an early lead from the penalty spot, and they would have been two down just minutes later were it not for a crucial intervention from Alfredo Talavera. Their robust riposte to that adversity was a reminder of this group’s resiliency. A stingy Atlas side should provide a tougher test in the semifinals, but Lillini and company are capable of coming through it.

Although a 5th CONCACAF Champions League title should soften the blow of Saturday’s elimination at the hands of Atlas, Monterrey’s league campaign must be viewed as a failure. The top flight’s most expensive squad is out in the quarterfinals after falling at the same stage last season, but Javier Aguirre’s post-match comments hinted at a worrying conformity.

The former El Tri tactician highlighted a lack of depth as a major reason for the early exit: “We have a small squad and look at the bench today, it’s what we’ve had almost all year. Six kids from Expansión, eight played over the course of the year.” While there were a host of inexperienced players on the sidelines at the Estadio Jalisco, “El Vasco” also had Mexico international Jesús Gallardo, Costa Rica stalwart Joel Campbell and Colombian creator Duván Vergara in reserve. Most Liga MX clubs would kill to have a trio of similar talent on their bench.

Aguirre has come up short on the domestic front, but he is merely part of a larger pattern at Rayados. The Northerners have now won only one league title in the last 24 short seasons. That is a paltry return given FEMSA’s financial might and the long list of star names who have shuffled through the doors of El Barrial in recent years. Money might buy continental crowns, but it doesn’t guarantee success in Liga MX.

From the brink of elimination, Tigres can now dream of a potential coronation. Los Felinos were less than ten minutes away from a premature exit to Santos, but Carlos Salcedo’s late left-footed thunderbolt has kept them alive. Given the vast postseason experience of both players and coach, a 6th league title in the last ten years is on the cards if León can be overcome.

La Fiera will fancy their chances after vanquishing plucky Puebla, and they can count on the core of the team that conquered all comers in the Guard1anes 2020. However, there is a massive gap in playoff nous between Liguilla rookie Ariel Holan and Miguel Herrera.

This is “El Piojo’s” 22nd postseason as a manager, and that know-how could prove invaluable in what promises to be a tightly contested tie. With two league titles already on his CV, the former América boss will know that a home win on Wednesday (Tigres are undefeated on their own patch this term) will set his side fair for a trip to the final.