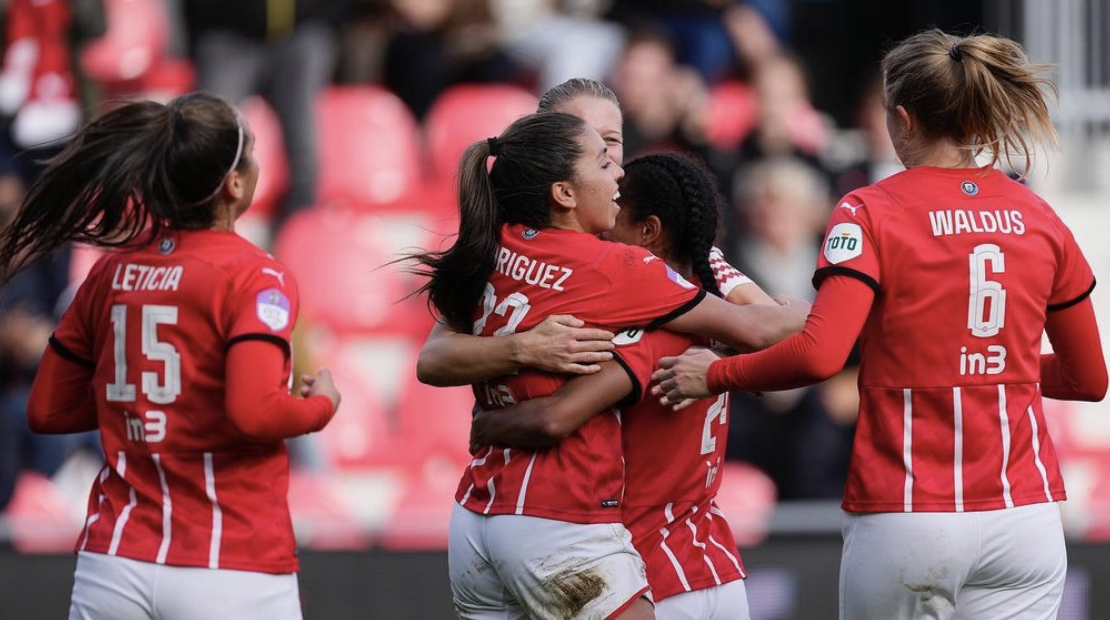 Most leagues returned from the international break, and the Mexicanas Abroad did well for the most part. Myra Delgadillo had a brace in Braga’s win, and Anika Rodríguez scored a game winner for PSV. Bri Campos and Vittsjö have a shot at the UEFA Women’s Champions League with a win and some help this weekend, while all four Mexicanas in the NWSL will be on teams in the playoffs.

Daniella Diaz was not on the game day roster as Brøndby lost 1-0 to HB Køge on Saturday, October 30th. Brøndby are in third place with 19 points, tied with Thy ThistedQ on points, three points behind Fortuna Hjørring, and twelve behind Køge. Brøndby will be on the road against Aarhus Gymnastikforening (AGF) on Saturday, November 6th.

Emily Alvarado played all 90 minutes in Stade de Reims 1-0 loss to Fleury 91 on Saturday, October 30th. The loss drops Reims into eighth place with seven points, two behind Dijon and Montpellier in sixth and seventh place, respectively. Their next match is on Saturday, November 13th when they host Dijon.

One of the few leagues that played during the international break, CSD Suchitépequez defeated Deportivo Xela 1-0 on Sunday, October 24th. Its unclear if Perla Morones or Verónica Jiménez were in the starting lineup for Suchitépequez, who won Group A2 with 25 points. They’ll now play a two-legged series against Cremas, the first will be away on Sunday, November 7th with the return leg on either the 14th or 15th in the quarterfinal round.

Anika Rodriguez played all 90 minutes and scored the lone goal in the game as PSV beat VV Alkmaar 1-0 on Sunday, October 31st. PSV rises to fourth place with 13 points, tied on points with Twente, Ajax, and PEC Zwolle, and just one behind first place Feyenoord. Their next match is an away trop to face Zwolle on Sunday, November 21st.

Pamela Tajonar played all 90 minutes in goal as Villarreal lost to Atlético Madrid 3-0 on Sunday, October 31st. Villarreal are in last place with just four points on the season, tied with Rayo Vallecano and Valencia, one point behind 13th place Sporting Huelva, and 20 behind first placed Barcelona. Villarreal host Madrid CFF on Saturday, November 11th.

Bri Campos played 85 minutes in Vittsjö GIK’s 1-0 loss to AIK on Saturday, October 30th. Vittsjö are now in sixth place with 29 points, one point clear of Hammarby and Linköping, one behind KIF Örebro DFF, and 25 behind first place FC Rosengård. Vittsjö hosts KIF Örebro DFF on Saturday, November 6th in the final game of the season. With a Vittsjö win and losses by Kristinastads and Eskilstuna, Vittsjö could finish as high as third place, which would get them into the 2022-23 UEFA Champions League first round.

Sabrina Flores was not on the game day roster as Gotham FC drew Racing Louisville 1-1 on Thursday, October 28th. She was also not on the gameday roster when the two teams played to another 1-1 draw on Sunday, October 31st. Gotham finished the season in fifth place with 35 points, two above the North Carolina Courage and three behind the Chicago Red Stars, who they’ll play in the first round of the playoffs on November 7th.

Katie Johnson was not on the game day roster as the Chicago Red Stars defeated the Orlando Pride 1-0 on Friday, October 29th. Chicago finished the season in fourth place with 38 points, one behind the Washington Spirit and just one above Gotham. Chicago will host Gotham on Sunday, November 7th in the first round of the playoffs.

Jimena López was not on the game day roster when the OL Reign beat Kansas City Current 3-0 on Saturday, October 30th. The Reign are in second place, two points behind the Portland Thorns and three over the Washington Spirit. Their next match is the second round of the playoffs against an opponent to be determined on November 14th.

Karina Rodríguez an unused substitute when the Washington Spirit beat the Houston Dash 1-0 on Sunday, October 31st to clinch the final playoff berth with 33 points. Washington will host the North Carolina Courage in the first round of the playoffs on Sunday, November 7th.