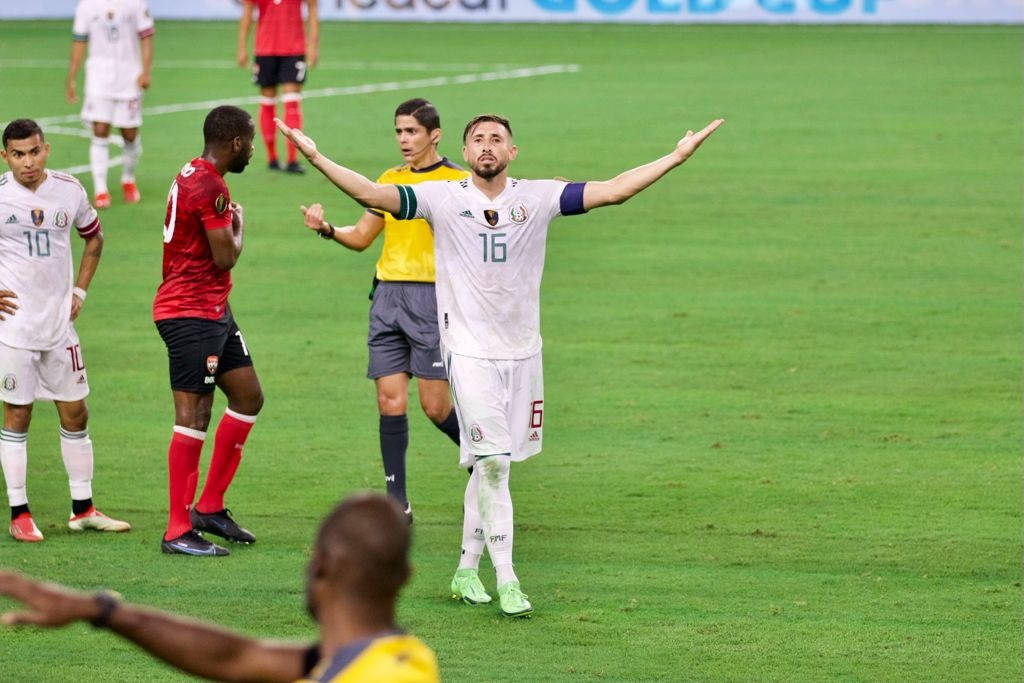 A Mexico with not too many options to start the tournament is left with even fewer as a Chucky Lozano injury results in a scoreless draw against Trinidad & Tobago in their first match of the 2021 Gold Cup.

From the very start, it seemed as though Trinidad & Tobago, fresh off their Gold Cup qualification penalty shootout, was running on pure adrenaline. A heavily physical beginning resulted in an unfortunate and brutal collision for Chucky Lozano with goalkeeper Marvin Phillip that forced him to be stretchered off with a neck brace just ten minutes in.

“From the bench, you couldn’t tell what was wrong and we were visibly concerned with the situation and what was going on with him. We all thought something had happened that critically impacted his health,” auxiliary coach Jorge Theiler – who took over for Tata Martino as he serves his Nations League suspension – stated after the match.

“We never give an opinion over the officiating. That is up to you [the press] to make that assumption. But all the players need to be protected. That’s what VAR is for. I don’t know what it is there for if they aren’t going to use it.

Right now, we are solely focusing on Chucky’s health. That’s the priority right now. Not Chucky the footballer but Chucky the person.”

Report at the moment.
Hirving Lozano is stable, conscious and he will be medically examined.#FuerzaChucky pic.twitter.com/lWgTwcItwc

From there, it seemed as though the atmosphere throughout the stadium – from the players, the staff and even the fans – changed for a large part of the first half. It became quiet with tension and frustration building up; even a first warning was announced to those in stands about the discriminatory chant and a few additional disagreements with the officiating.

“It severely influenced the team – to see your teammate suffer an injury like that but we had lots of chances at goals. There was only one real protagonist to score tonight and we were ultimately unable to get the goal and win the match,” Theiler continued.

The momentum started shifting a bit and Mexico adjusted to a system without Lozano involved. Tecatito and Funes Mori showed some good back and forth in the box during the 27th minute.

The modifications continued as Jonathan Dos Santos and Orbelin Pineda were subbed on early into the second half, with Mexico looking for goals outside the box and in the air.

The tensions still lingered however as play was stopped at the 85th minute after the chant was clearly heard a second time. Hector Herrera, one of the standout players of the match who did well to control the midfield despite all these adjustments, visibly implored the fans in the stands to stop. It only got worse in the 93rd minute when a Funes Mori goal was called offside and no review was made, forcing the match to be stopped again in the 94th minute of play, with an announcement projected on the screens and fans loudly jeering the warnings. A final stadium-wide chant was heard very loudly just before the final whistle, a disappointing end to a clearly frustrating night.

“Unfortunately, it showed up again tonight after a few good games. Ultimately the fans need to understand that this impacts us deeply; hurts us in all areas. A lot of things will happen if this doesn’t change quickly,” Talavera stated after the match.

“We’ve been talking about this for a long time; since the last World Cup we’ve been asking fans to stop [with the chant]. There’s no justification [frustration at the refs, bad calls, etc.] for it being said at this point.”

Mexico faces off against Guatemala in their second game of the Gold Cup Group Stage match on Wednesday, July 14th at Cotton Bowl Stadium.