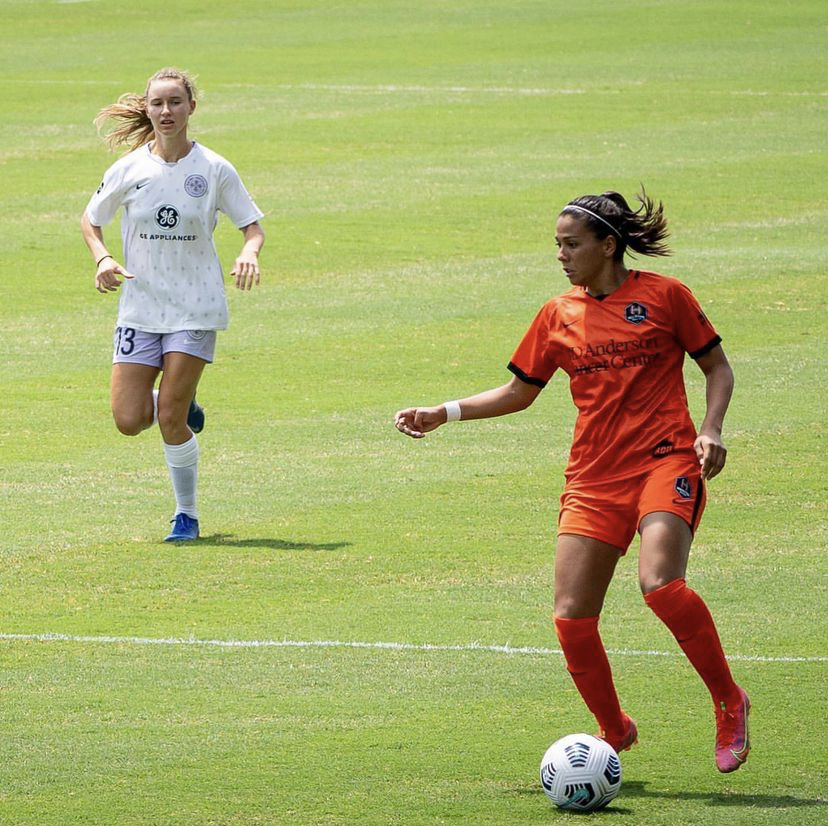 As if the end of most European leagues didn’t give this column fewer players to cover, news broke this week that Amanda Pérez had left Sporting Club de Portugal for Club América and Ceci Santiago had left PSV for Tigres in Liga MX Femenil.

These are both good moves for these players, as Pérez and Santiago struggled for minutes this past season with their respective clubs. One Mexicana Abroad left her club but remains a Mexicana Abroad as Jimena López leaves Eibar for OL Reign in the NWSL. Also joining her in the NWSL is former UCLA defender Karina Rodríguez signing a one year deal with the Washington Spirit. Both López and Rodríguez will most likely join their respective teams after the international break where they’ll team up against some of their new teammates in Connecticut as México takes on the reigning two-time World Cup champions.

Pamela Tajonar was an unused substitute as EDF Logroño lost 2-0 to Atlético Madrid. Charlyn Corral was not on the gameday roster for Atlético Madrid, who sit in fourth place with 60 points. Logroño is in last place with 23 points. In the final week of the season, Atlético Madrid hosts Levante and Logroño is away to Rayo Vallecano on Sunday, June 27th.

Kenti Robles was an unused substitute as Real Madrid hammered Santa Teresa 5-1. Real Madrid are in second place in the league with 73 points and can clinch a bye to the second round of the UEFA Women’s Champions League with any result other than a loss and a Levante win with Levante overcoming a 16 goal differential deficit. Real Madrid hosts UDG Tenerife on Sunday, June 27th.

Kiana Palacios came on in the 86th minute and picked up a yellow card as Real Sociedad lost 4-1 to Barcelona. Real Sociedad are in fifth place with 58 points, two behind Atlético Madrid and one above UDG Tenerife. Sociedad is away to Valencia on Sunday, June 27th.

Jimena López was not on the gameday roster as OL Reign lost 2-1 to the North Carolina Courage on Sunday, June 19th, nor was she on the roster in OL Reign’s 2-0 win over the Chicago Red Stars on Tuesday, June 22nd. However, Katie Johnson of the Red Stars played all 90 minutes of that match, contributing five shots and two shots on goal in 36 touches as a left winger in the loss. OL Reign are tied with Racing Louisville FC and the Houston Dash for seventh place with seven points, and they’ll host Gotham FC on Saturday, June 26th. López however will be with the Mexican National Team on international duty.

Johnson also played 26 minutes in Chicago’s 1-1 draw against the (Karina Rodriguez-less) Washington Spirit on Sunday, June 19th, getting a shot and a shot on goal in 12 touches. Chicago is tied with Gotham FC for fifth place with eight points, and the Red Stars will host Racing Louisville FC on Saturday, June 26th. And though she’ll be on international duty, Rodriguez’s fourth-place Spirit will be away to Kansas City on Saturday, June 26th.

María Sánchez played 68 minutes in the Houston Dash’s 1-0 loss to Racing Louisville FC on Monday, June 21st. Sánchez took four shots, one of which was on target, and completed 23 of 27 passes in the loss. She may however be most remembered for this ankle-breaking run. The Dash are tied with OL Reign and Racing Louisville FC with seven points and will host the first place Orlando Pride on Saturday, June 26th.

Sabrina Flores was not on the gameday roster as Gotham FC drew the Orlando Pride 1-1 on Monday, June 20th. Gotham are tied with Chicago for fifth place, and they’ll be away to OL Reign on Saturday, June 26th.