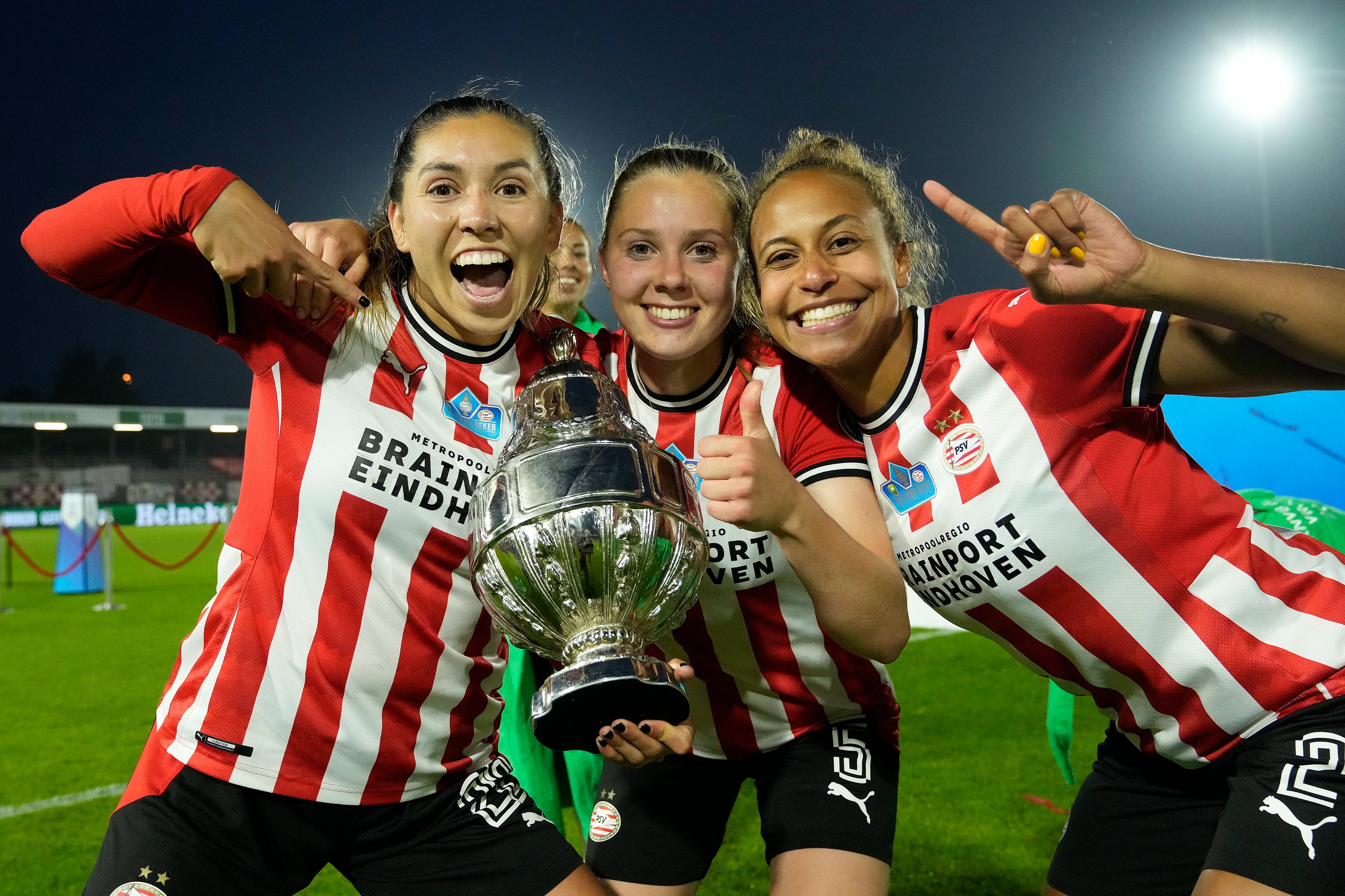 This past week marked the season’s end in both Denmark and the Netherlands, and with it the end of an era with PSV. While both Brøndby and PSV will be in the 2021-22 UEFA Women’s Championship League, PSV will do it without Ceci Santiago. Rumor has her going to a Liga MX Femenil team, but nothing solid has emerged on her future. Meanwhile Spain saw one team secure a place in the UWCL, one secure a place in the Liga Iberdrola next season, and another secure a place in the Segunda División in 2021-22 as they enter into the penultimate week of competition. Sweden and the United States however will continue to play through the summer.

Daniella Diaz was an unused substitute as Brøndby lost 3-1 to Køge in the final match of the season. While Køge won the Elitedivisionen as a result of the match, both teams advanced to the UEFA Women’s Championship League (UWCL) next season. Køge will skip to the second round, while Brøndby will be in the first round of play. The Round 1 draw will be held on July 2nd.

Anika Rodriguez was subbed on at halftime as PSV won the KNVB Beker Cup 1-0 against ADO Den Haag. Ceci Santiago was an unused substitute in the match, and after the match, PSV’s Spanish-language Twitter account thanked her for her contributions and wished her success in the future.

Kenti Robles played all 90 minutes and scored the game-tying goal in the 81st as Real Madrid went on to beat Real Sociedad 3-2 on Sunday, June 6th. Kiana Palacios subbed on in the 86th minute for Real Sociedad, who are in fourth place with 58 points nine points behind third place Levante and the final slot in the UWCL. Real Madrid are in second place with 70 points, one above Levante and 17 behind Barcelona (who still have two games in hand). Real Sociedad will host Barcelona while Real Madrid is away to Santa Teresa on Saturday, June 19th.

Jimena López played all 90 minutes as SD Eibar beat EDF Logroño 2-1 on Sunday, June 6th. Pamela Tajonar was in goal for Logroño in the effort, who will be relegated at the end of the season. Logroño are last in the table with 23 points, eight behind 14th place Real Betis and safety from the drop, while Eibar clinched another season in the league. Eibar now has 33 points, seven more than 14th place Deportivo Abanca. They’ll host Sporting Huelva, while Logroño hosts Atlético Madrid. Both matches are on Saturday, June 19th.

Bri Campos played all 90 minutes as Vittsjö GIK beat Växjö 1-0 on Saturday, June 5th. Heading into the international break, Vittsjö has 12 points, tying them with Hammarby for fifth place on the table, one point behind both Linköpings FC and Kristianstads DFF and 10 behind league leaders FC Rosengård. Vittsjö’s next match is on Monday, June 21st against Rosengård.

Katie Johnson came on in the 83rd minute as the Chicago Red Stars beat the North Carolina Courage 1-0 on Saturday, June 5th. Chicago is tied with Gotham FC and Houston Dash for fourth place with seven points, three over the seventh place North Carolina Courage and a point behind the Washington Spirit. The Orlando Pride lead the league with 11 points. Chicago’s next game is on Saturday, June 19th when they host the Washington Spirit.

Sabrina Flores played 67 minutes  in her first start of the season, contributing two shots as Gotham FC downed OL Reign 1-0 on Saturday, June 5th. Gotham’s next match is Sunday, June 20th away at the Orlando Pride.

María Sánchez subbed on in the 61st minute and contributed a shot on goal in her debut for the Houston Dash as they went on to beat Kansas City 1-0 on Sunday, June 6th. Houston’s next match is Sunday, June 20th at Racing Louisville.