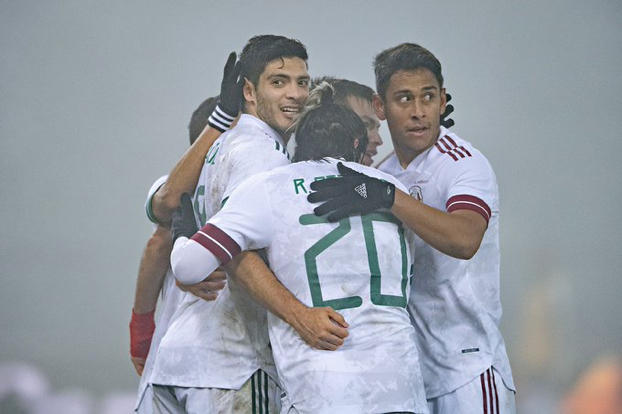 It was hard to see much of anything by the end of Mexico’s hard-fought 2-0 win over Japan, but a potentially transformative midfield partnership had already been found before a dense fog descended over the Stadion Graz-Liebenau. This was the first time that Luis Romo and second half substitute Edson Álvarez were fielded together in the engine room, and their alliance helped El Tri impose themselves on a Samurai Blue side that dominated early on. There is plenty of work to be done to make sure those hellish first 30 minutes are never repeated, but Romo and Álvarez appear to be part of the solution.

As is the case with almost any match they play, Gerardo Martino’s men were expected to hog possession and control the territorial battle on Tuesday. That Japan took the game to them from the get-go was a surprise, and Mexico initially had no answer for their opponent’s aggressive attitude. Their defending was diso rganized, while simple passes went astray with regularity. Were it not for a few stunning saves from Guillermo Ochoa, the Samurai Blue would have been out of sight within half an hour.

Although El Tri did even up proceedings in the final stages of the first stanza, that seemed more a result of Japan’s inability to maintain a previously frenetic rhythm than anything else. Any Mexican attempts to hurt the rival backline were tepid at best, with main attractions Raúl Jiménez and Hirving Lozano peripheral figures. When the whistle sounded for halftime, Mexico had not mustered a single shot on target.

Ironically, it was a defensive change that allowed El Tri to go forward with greater conviction. Álvarez was introduced in favor of the more attack-minded Charly Rodríguez before the second stanza got underway, with the Ajax asset sitting next to Romo at the base of midfield. That increased protection gave Jiménez and company a solid platform from which to probe a previously untested Japanese back four. The red-hot Wolves marksman was more involved as a result, and he duly opened the scoring with a smart toe-poked finish after some intricate interplay with Orbelín Pineda.

With Jiménez and fellow goalscorer Lozano in this type of form, “Tata” can focus his attention on reinforcing a rickety rearguard. While the Argentinean has almost two years to find solutions before Qatar rolls around, he will be hampered by a straightforward schedule. With this year’s allotment of games in the United States set to be rescheduled instead of canceled, Mexico will have a surfeit of undemanding friendlies in friendly confines. Furthermore, the CONCACAF qualifiers for the World Cup should not prove too challenging, although the rejuvenated Americans and an always tricky Costa Rica could cause a scare or two.

That easy fixture list makes the discovery of the Romo-Álvarez axis all the more important. That tandem may not be needed for a home date with The Bahamas, but they would be of far more use against Belgium. After decades spent being the biggest fish in a small regional pond, the only thing a Mexico coach is ultimately judged on is how his charges perform on world soccer’s biggest stage. Martino must reach the mythical ‘quinto partido’ if he wants to leave a positive legacy, and his new midfield duo can help him get there.

Martino’s Best Case Is On The Defense Against Japan
Hector Herrera returns to Mexico to mourn the death of his mother from COVID-19, misses final La Liga Madrid Derby
To Top