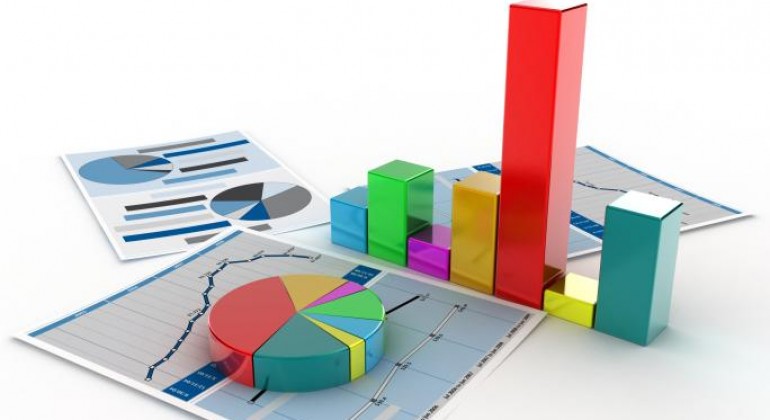 Back in 2016, I teamed up with Global Soccer Network (GSN) to statistically analyse the differences between Liga MX and top European leagues, the English Premier League and German Bundesliga.

This study found many of interesting differences between the style of play in Mexico and some of Europe’s best divisions. For example, Liga MX teams were found to pass the ball approximately 5.9% slower than English and German ones, whilst the ball was in play for around 6.6% less time.

Other findings from the study were focused on comparing certain actions, such as shots, dribbles and tackles with the number of passes.

Click here to read the previous article and learn more

Now, with the help of Sofascore data, I’ve developed my own set of metrics, Performance 100. Performance 100 differs from regular statistics that are presented in the media as it looks at player and team actions per 100 possessions, rather than per 90 minutes. Therefore, the bias of how often a player gets the ball is removed, and a complete representation of playing style, decision making, and efficiency is created.

Performance 100 data gives a new opportunity to compare Liga MX with the best European leagues. Below, two graphics display Performance 100 data for the whole of Liga MX and Europe’s “big 5” leagues (England, Spain, Italy, Germany, France) during the 2017/18 season. There is also a key to explain how to read the graphic. 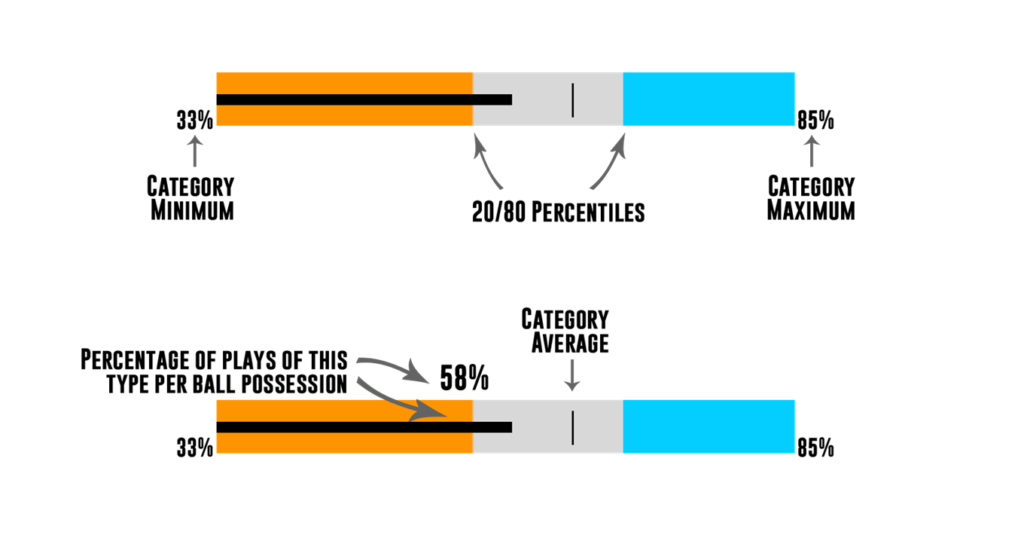 How to read the Performance 100 graphic 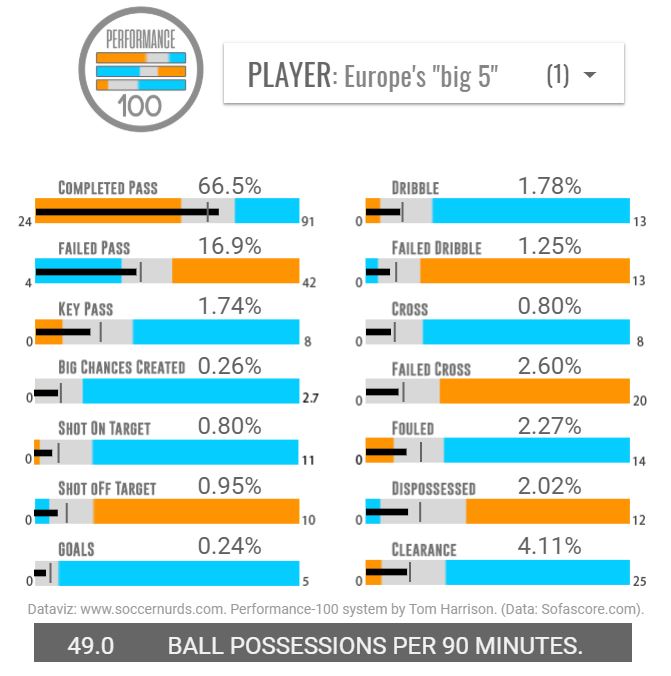 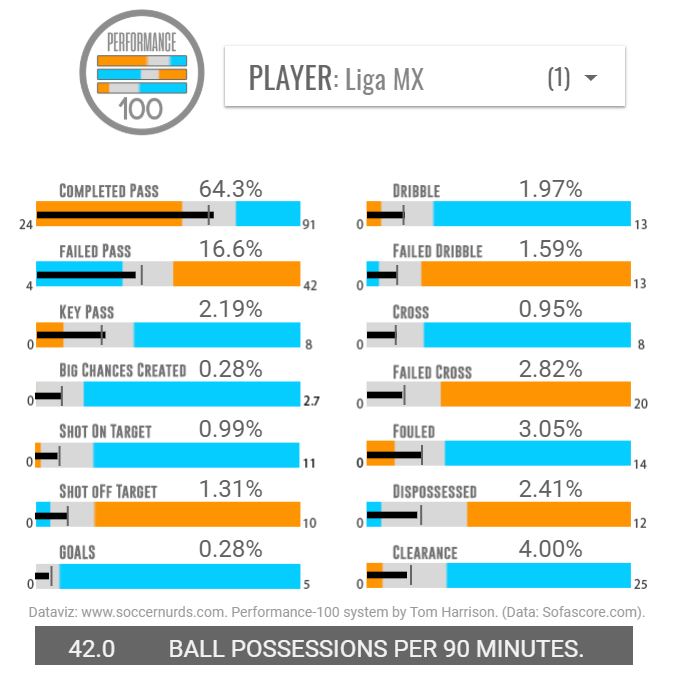 Perhaps the first thing to point out is that the graphics display similar numbers. Differences in style are quality are rather subtle in this data, but in a low scoring sport, subtle differences can have a huge impact.

One of the most significant variation between the European leagues and Liga MX last season was the number of ball possessions per 90 minutes. The average player got the ball seven times less per game in Mexico than they did in Europe’s “big 5” leagues. This refers back to findings in the previous study, concerning the slower tempo of Liga MX, when the ball is on and off the pitch.

Another subtle, but intriguing, difference is found when comparing completed passes and “attacking output” like shots, dribbles and crosses. This difference mirrors what was found in the previous study when looking at actions per pass.

The sizes of pass and “attacking output” figures can provide an excellent indication of the style of play of a team. Teams or players with higher completed pass figures are more possession-based, and less direct, as they are choosing to pass the ball at greater regularity than other sides.

The average Liga MX player completed a pass 64.3 times per 100 possessions last season, less than their European counterpart, with 66.5 passes per 100 possessions, but still above the average player across over 20 global leagues. This deficit was made up for with more shots, dribbles, crosses, big chances created and goals per 100 possessions. The implication of this data is that Liga MX teams were generally, slightly, more direct than clubs in Europe’s top divisions. The reason behind this is unclear though, and it may be that this results simply from Liga MX defences being weaker, making them easier to play through. It could also stem from a seasonal bias, as two of the most successful attacking teams in Liga MX across 2017/18 were Monterrey and León, both highly direct in their style.

Another intriguing theory is that due to a less developed pressing game, partly due to the impact of heat and altitude in Mexico, Liga MX teams can find it fairly easy to get into the opponents final third. In this part of the pitch, players are more likely to decide to dribble, cross or shoot, and the data may be reflecting this difference.

The largest statistical difference comes from fouls, with the average player fouled over a third more often in Liga MX last season. This is likely to link to the number of dribbles that players in Mexico completed compared to their European counterparts, but an increased level of referee strictness is another probable factor.

Difference in dribble efficiency could once again link to the differences in pressing across the leagues. With a more sophisticated pressing game, “press-resistant” midfielders and defenders, who are often excellent at dribbling out of a high press, have risen to prominence in the European game. The impact of this could result in dribbles taking place, on average, further away from the opposing goal in Europe’s top leagues than in Mexico. Dribbling is generally easier and more likely to be successful as you move further away from the opposing goal, so the better dribble success rate in Europe’s “big 5” may result from style of play, rather than the obvious suggestion that attackers in top Euro leagues are comparatively better at dribbling.

Lower shot accuracy in Liga MX may be due to worse quality attackers, but again, style, specifically where shots are generally attempted from, may be a factor. Average shot distance or simply a comparison between shot numbers from inside and outside the box would be useful here to assess in further depth.

It may be a surprise to see cross accuracy greater in Liga MX, considering that Europe’s “big 5” possessed better dribble and shot efficiency. An explanation may be that in a league with a low average height, the set of (mostly Argentine) target men find a lot of joy aerially in Liga MX. 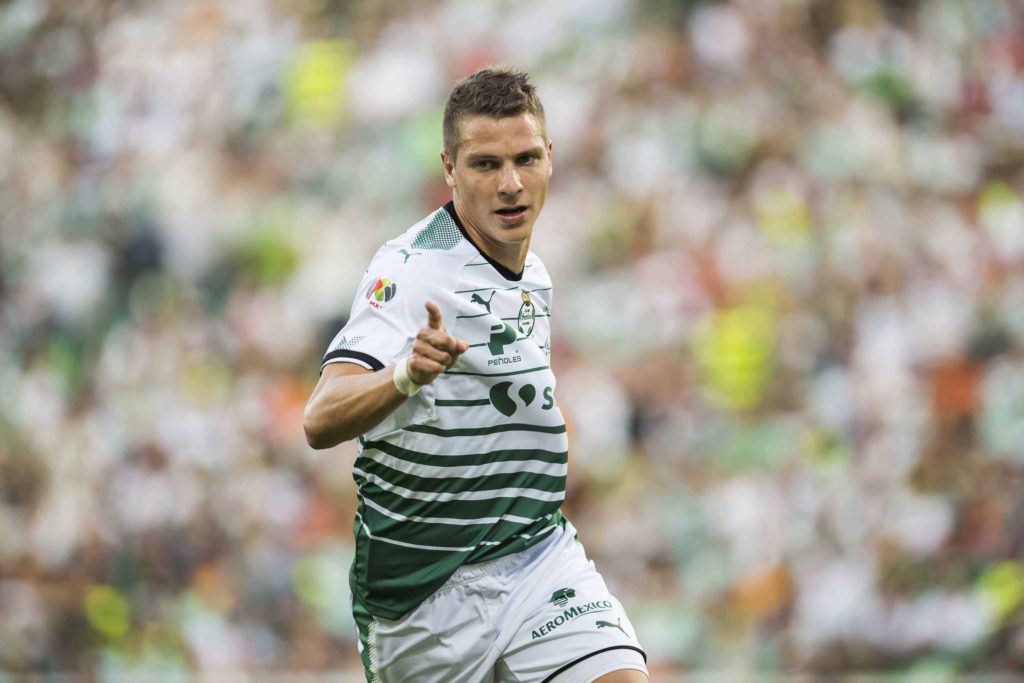 Julio Furch is one of the best target men in Liga MX, the Santos forward won over 54% of his aerial duels in 2017/18

Statistical variations between Liga MX and Europe’s “big 5” leagues are subtle, but significant. Liga MX is played at a slower tempo, and often fans see fewer minutes of actual play than they would do in England, Spain, Italy, Germany or France. This makes the league sound less entertaining, but with more dribbles, shots, crosses and fouls per 100 possessions, the opposite could also be argued, as Liga MX fans see “attacking output” at greater frequency.

Studies like this always inspire the want to delve deeper and learn even more. Limitations usually stem from the availability, and understanding, of data, highlighted in this article when thinking about the reason behind lower shot accuracy in Liga MX. With greater access and knowledge of the power of certain metrics, it would be particularly fascinating to look in more detail at the differences in pressing and defensive positioning between Liga MX and Europe’s “big 5”.

I’m not sure exactly how to go about studying that right now, but article has just presented the basics of Performance 100 data, and plenty more can be learnt about Liga MX by assessing and experimenting with per possession data. Follow me on twitter @tomh_36 for future studies.

The Fifth Game and Mexico’s Historic Probability
Possession-based Football in Liga MX is Less Efficient for Creating Chances, in Contrast to Europe’s “Big 5”
To Top