Liga MX is undoubtedly one of the world’s top football leagues, but by general consensus, it trails the major European leagues. Mexican football is also often perceived as having a different style of play to the strongest footballing nations across the Atlantic.

Just how Liga MX differs to top European leagues is something many fans of the league often wonder. This study explores the topic, aiming to discover how Mexican football compares.

Thanks to the help of Global-Soccer-Network, an agency which have developed their own rating system for professional footballers, a statistical analysis between Liga MX and 2 major European leagues has been conducted. Using statistics, rather than observations, offers more of a fact-based approach to comparing the divisions, removing human biases.

To learn more about GSN and their revolutionary rating system, click here.

This article will look at average statistics from teams across the English Premier League, German Bundesliga and Mexican Liga MX, using these stats to make suggestions and judgements on how the leagues differ.

The average number of passes per game made by Bundesliga and Premier League sides this season is fairly similar, 499.89 and 491.35 respectively, but the figure for Liga MX is significantly less, at 433.78.

This trend is mirrored when looking at ball possession minutes per game. On average Liga MX clubs have possession of the ball for almost 2 minutes less than Bundesliga and Premier League teams per game.

At first glance, it would appear that these stats show that Liga MX clubs are worse at passing than their counterparts in the Bundesliga and Premier League, as they are completing less passes on average. However, successful pass percentage data proves this suggestion wrong. The average passing completion percentage for all 3 divisions is 83.

A theory is that tempo, or speed, of play is the key factor in determining this difference between Liga MX and the Bundesliga and EPL. On average, Liga MX teams play the same length passes with the same level of accuracy, but they are playing less per game.

There are two distinct aspects to the term ‘speed of play’. How quickly a team moves the ball when they have it, and how quickly the game itself flows, for example how long free-kicks and throw-ins take.

Whether a team passes the ball quickly or slowly shouldn’t influence how long they hold possession per game if their pass completion percentage is the same regardless of their passing tempo, as it is across the 3 leagues.

In Liga MX, teams have possession for 6.6% less time than the average of Bundesliga and Premier League teams, whilst 12.5% less passes are made in the top flight of Mexico than the first divisions of Germany and England. These statistics suggest that both the speed of play when teams have the ball, and pace of the game in general, is lower in Mexico.

Assuming there’s no difference in the amount of time that the ball is in play but not in possession, it could be argued from this data that Liga MX teams pass the ball around 5.9% slower than their counterparts in Germany and England. Meanwhile, the speed of the game itself, e.g. how long are taken for stoppages, is 6.6% slower. 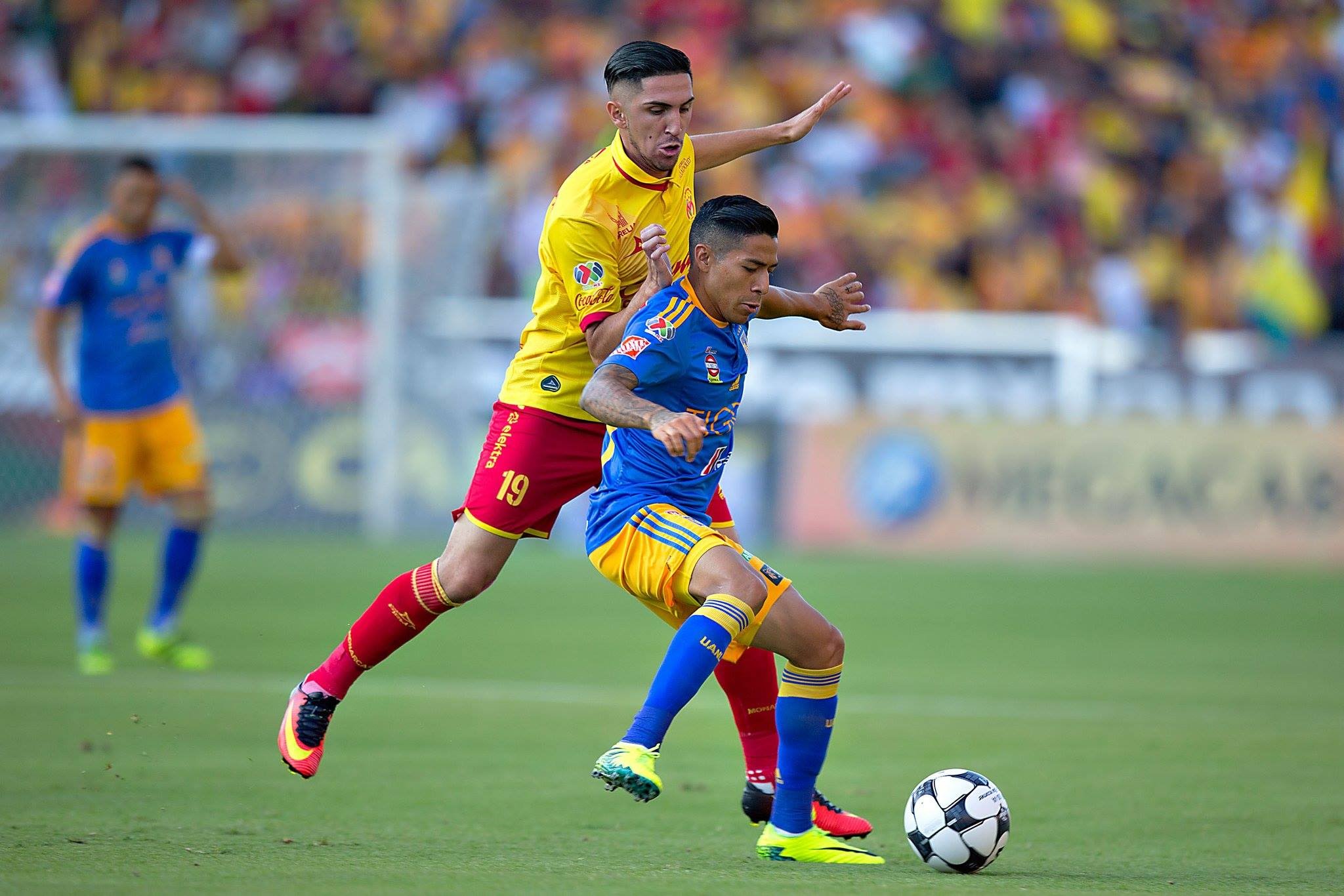 Tigres are known for their slow, possession-based game

The question of why this may be the case is an interesting one. Football culture and player quality are both possibilities, but perhaps the key factor is the playing conditions in Mexico.

Despite teams in Liga MX taking more shots per game on average (12.67) in comparison to Bundesliga (12.17) and Premier League (11.7) sides, Bundesliga teams score marginally more goals per game. Clubs in Germany’s top flight have averaged 1.42 goals per game, compared to 1.36 and 1.34 for teams in the Mexican and English top flights respectively.

However, the goals per game stats do correlate with the number of attacks that involve 5 of more passes. Like goals per game, Bundesliga teams average more attacks containing 5 or more passes than Mexican sides, who lead English clubs.

Liga MX teams attack on the counter less often than Bundesliga and EPL clubs. The average number of counter attacks per game for Liga MX teams this season is 14.78. This trails the figures from the Bundesliga (15.5) and EPL (16).

The Mexican top flight also trails the first divisions of Germany and England when it comes to dribbles. Despite the success rate being higher in Liga MX, less dribbles are attempted per game than in the Bundesliga and Premier League.

This season, Liga MX sides have taken 21% more shots per pass than Bundesliga and Premier League teams. This could suggest that more long shots are attempted, or that more chances are created.

More evidence for Liga MX teams creating more chances per pass comes from the attacks involving 5 or more passes data. When controlling for the number of passes, Mexican sides have 11% more attacks than German ones and 18% more than English ones.

The goals per passes stat for Liga MX clubs is 11% higher than their German counterparts and 15% above the data for English sides. As these percentage differences are lower than the shots per passes percentage differences, it suggests Liga MX teams are less efficient with their shots. However, they are more effective at turning passes into goals. Both of these points hint towards more long shots being taken in Mexico.

Mexican teams have also enjoyed more counter attacks per passes this season, although the difference is less. 10% more than German sides and just 3% more than English outfits.

Necaxa enjoyed plenty of success on the counter this season

Finally, the number of dribbles for every pass made by a Liga MX team this season is above the average for Bundesliga and Premier League clubs. 5% and 3% respectively.

In summary, when looking at; shots, attacks with more than 5 passes, goals, counter attacks and dribbles per pass, Liga MX is ahead of the Bundesliga and Premier League. This is a fantastic indication of why the league has a reputation for entertaining football.

When dividing these figures by average number of passes, the difference between the 3 leagues is fewer than 1%. This remarkable similarity backs up the usage of per pass data as an effective method to compare the divisions.

Another interesting take from the tackling data comes from cross-referencing it with the number of fouls and percentage of tackles which are successful.

The successful tackles percentage is very similar across the 3 leagues; 50% for Liga MX and EPL clubs, 51% for Bundesliga sides. In fact, there’s only a range of 47% to 53% between all 56 teams studied.

The average foul count per game for Liga MX clubs is 36.8% of their average number of tackles per game. This figure drops sharply to 27.3% for Bundesliga teams and 22.5% for Premier League sides.

The large number of fouls in Mexico is an indication that Liga MX referees might be stricter than their Bundesliga and Premier League counterparts. However, it could be a result of rougher play in Mexico, or lower-skilled tackles. Lower-skilled tackles seem unlikely to have been factor though, as the successful tackles percentage is almost the same across all 3 divisions.

Red card statistics also suggest stricter officiating in Mexico. For example, at time of writing, Veracruz had been shown a remarkable 8 red cards this Liga MX season. This was just 1 fewer sending off than the total number in the EPL, and more than half the total Bundesliga figure.

Perhaps the most obvious difference between Liga MX and the Bundesliga and Premier League, is the number of aerial duels which take place during games. Again, dividing by number of passes per game to control for the slower tempo provides the best method of comparison.

This campaign, Liga MX teams have averaged 24% fewer aerial duels per match than Bundesliga clubs, and 25% less when compared to Premier League sides. This data is strong evidence that Liga MX sides like to keep the ball on the ground more than teams in the Bundesliga and EPL do.

Aside from stylistic variations, possibly the largest difference between Liga MX and the Bundesliga and Premier League is the level of parity between teams in the division.

Plenty of stats back up this claim. The gap between the highest and lowest ranking Mexican teams in average possession is 14%. This gap is 24% for German clubs and 21% for English sides.

Attacks with 5 or more passes also provide evidence. Whilst the gap between top and bottom in this aspect is 12 for Liga MX clubs, it’s 18 for Bundesliga teams and 16 for EPL sides.

If Liga MX had no play-offs and 1 competition per season, this would be the final table this season. pic.twitter.com/WIk3uOfd1v

A few limitations to this study have to be acknowledged. The main weakness of the research is the limited time period covered. Only stats from this season were looked at for this article, and when studied none of the 3 leagues had yet reached the half-way point in their campaigns.

The study also only compared Liga MX to 2 other major world leagues, the German Bundesliga and English Premier League. More leagues will have to be included to conduct a more thorough piece of research.

In addition, whilst some fantastic pieces of data were provided for this article by GSN, more stats may have led to different or additional conclusions about how Liga MX compares. Average dribble length, number of long shots and average time a player has possession for are examples of stats which could have added depth to this study.

Finally, using league averages may result in misleading data. For example, if you remove the high scoring Bayern Munich and Borussia Dortmund, the Bundesliga moves from top to bottom of the goals per game chart.

There are five main takes from this study. Firstly, Liga MX has a lower tempo than major European leagues like the Bundesliga and Premier League. Lower tempo refers to both the speed at which teams move the ball, and the flow of the game itself, e.g. time taken for stoppages. Fewer passes and lower average possession time back up these claims.

The vast gap between the number of aerial duels in Liga MX and in the Bundesliga and EPL strongly points to Mexican sides preferring to keep the ball on the ground. Even Veracruz, a side which regularly take long throw-ins, average more than 10 fewer aerial duels per game than the average Bundesliga or Premier League team.

In addition, it’s highly probably that referees are stricter in Mexico’s top flight. A high foul to tackles ratio, and huge number of red cards, point towards stricter refereeing in Liga MX.

Furthermore, Liga MX has more parity than top European leagues. The short-term competitions and play-offs contribute to this parity, as does the inability to hold onto strong players when attractive offers from European clubs are made.

Finally, Liga MX sides attempt more shots, attacks with more than 5 passes, counter attacks and dribbles, and score more goals, per pass, than clubs in the Bundesliga and Premier League.

Considering that there’s more attacking plays, and goals, per pass, it’s easy to understand why many think of Liga MX as an attractive league. Also, the level of parity between sides, and unpredictability over results, makes Mexican football exciting to follow.

However, some fans may prefer to watch football with a quicker tempo to Liga MX. Moreover, more attacking plays may indicate worse defending, which may put off some potential viewers.

Overall, this study is far from perfect, as there are multiple limitations, but it’s a useful guide with which to compare Liga MX and some of Europe’s major leagues, and gives a few suggestions of why Liga MX is seen as attractive and exciting league by so many fans.

If you’re a fan of sides that keep the ball of the ground, and create plenty of attacking moves per pass, and you’re able to deal with a slower tempo of play, you’ll probably like Liga MX.

Do Young Mexican Players Receive a Fair Chance in Liga MX?: A Global Study
Has the 10/8 Rule Impacted Opportunities for Young Mexicans?: A 10 Season Study
To Top