Performance 100 wheels are a method of visualising how many possessions each player has per match. Possessions being distinct occasions when a player has the ball and goes onto complete an action (e.g. dribble, pass, shoot). Each team’s wheel displays possessions per 90 minutes for the whole squad, as long as they’ve played 500 minutes of league football, the cut-off point.

Seeing how often various players in a squad receive the ball can give a fantastic indication of how sides build-up play and which players are more significant to forming attacks than others.

Here, using Performance 100 wheels, some theories are formed about the build-up play of various sides. Note that data is taken from the whole of the 2017-18 season, and changes in managers and tactics may have impacted the wheels, and therefore the effectiveness of these theories.

All raw data is taken from Sofascore. The wheels and possessions per 90 calculations were completed by Tom Harrison with the help of Soccer Nurds.

Building from the back 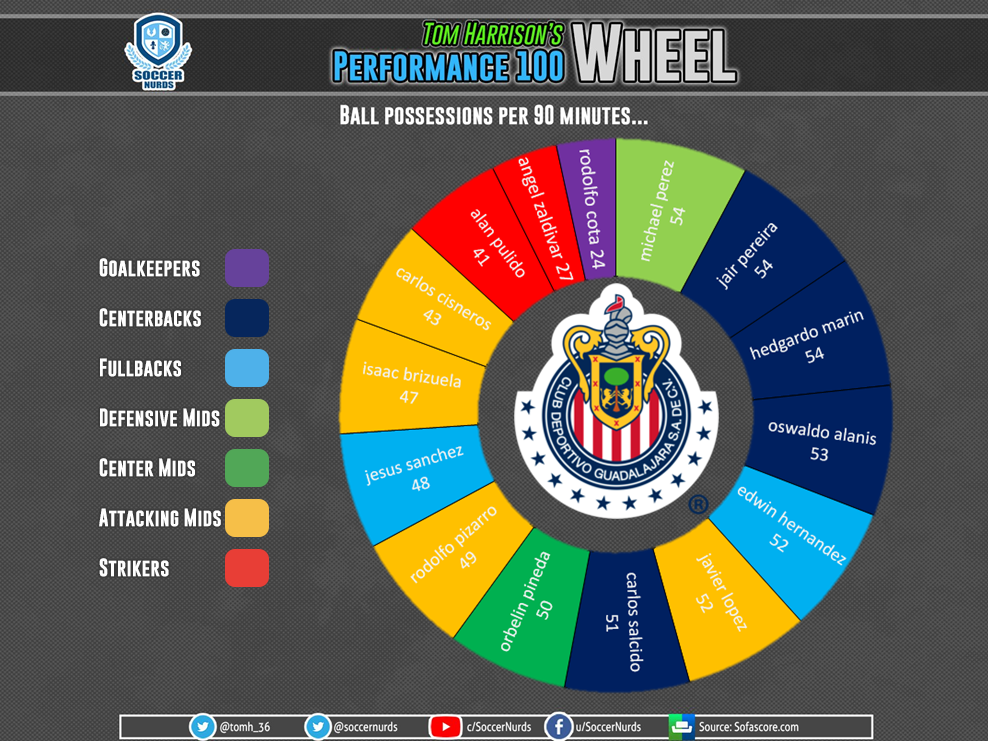 Chivas are a good example of a side that like to build attacks from the back, rather than look to feed attacking players as quickly as possible. The top five players on the Chivas Performance 100 wheel are mainly defensive-minded, with attackers like Ángel Zaldívar, Alan Pulido, Carlos Cisneros and Isaác Brizuela towards the end of the wheel.

The attacking player with most ball possessions per 90 minutes is Javier “Chofis” López, who even ranks, slightly, above Orbelín Pineda, a player who many have described as the heartbeat of the Chivas side, at least in previous seasons. This is another impressive stat for Chofis, which sits well amongst his fantastic rate of creating chances. López plays a key pass more than seven times per 100 possessions.

Another noteworthy aspect of the Chivas wheel is Pulido’s 41 possessions per 90. This is significantly higher than the average for a Liga MX striker, and way above fellow Guadalajara forward Zaldívar. The high number gives an indication of the role that Pulido plays for Chivas, which could accurately be described as a “false-nine” or “second striker” considering the regularity at which he drops deep to get on the ball. 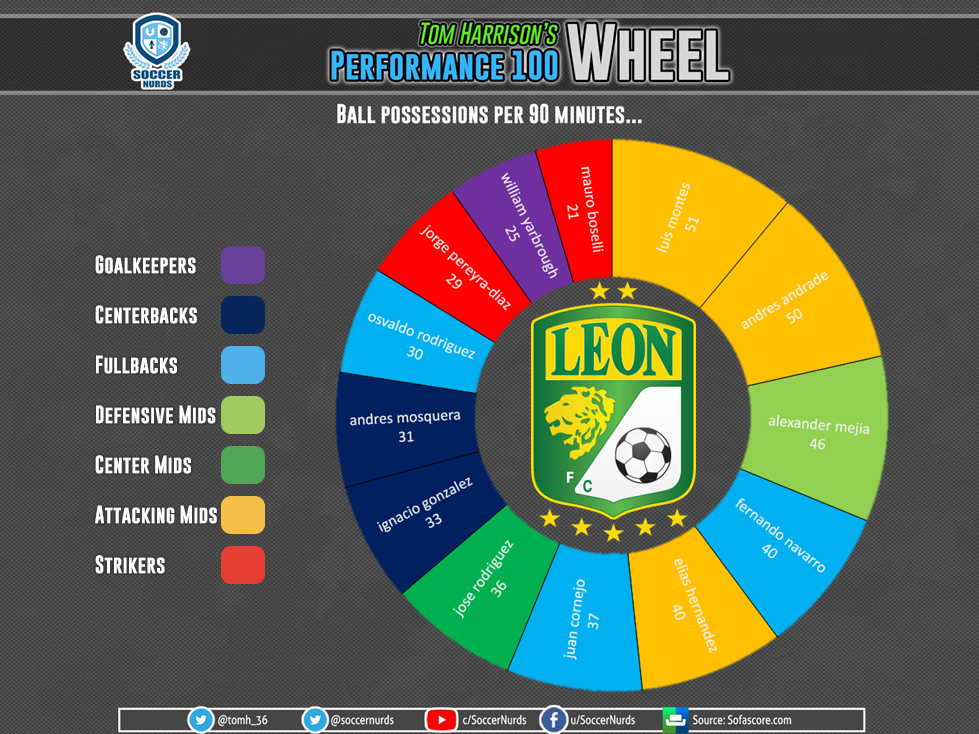 León have one of Liga MX’s best attacking midfield trios in Luis Montes, Andrés Andrade and Elías Hernández, and evidently the tactic is to feed these players with as much possession as possible. Montes and Andrade lead León’s Performance 100 wheel, with Elías not too far behind.

Compare this to León’s centre-backs; Andrés Mosquera and Nacho González, who are amongst the least involed players for León. The contrast to Chivas’ wheel is stark.

Interestingly, feeding the attacking midfielders regularly doesn’t lead to Mauro Boselli often getting possession. Considering that Boselli has only had 21 possessions per 90 this season, it’s remarkable the impact that he’s had for León. 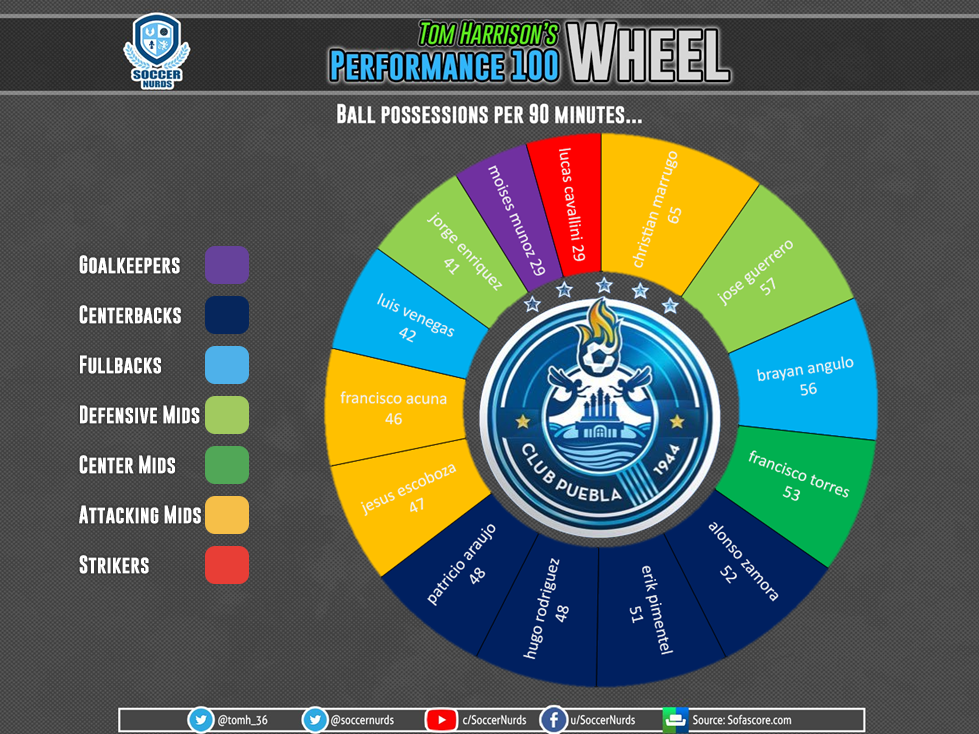 Whilst differences in directness were expected findings when analysing Performance 100 wheels, a more surprising observation can be made from the wheels for Puebla and Pumas. Both sides show clear biases towards the left-side of the pitch when in possession.

Puebla’s left-side bias is stark. Left full/wing-back Brayan Angulo averages 56 possessions a match, whilst his right-sided teammate receives the ball on just 42 occasions per 90 minutes. This bias leads into midfield as well, where Christian Marrugo, who normally plays as a left-sided central/attacking midfielder has almost 20 more possessions per 90 than his right-sided counterpart, Francisco Acuna. It’s a tactic that makes some sense, considering the talents of Angulo and Marrugo, as well as their developing connection on the field. 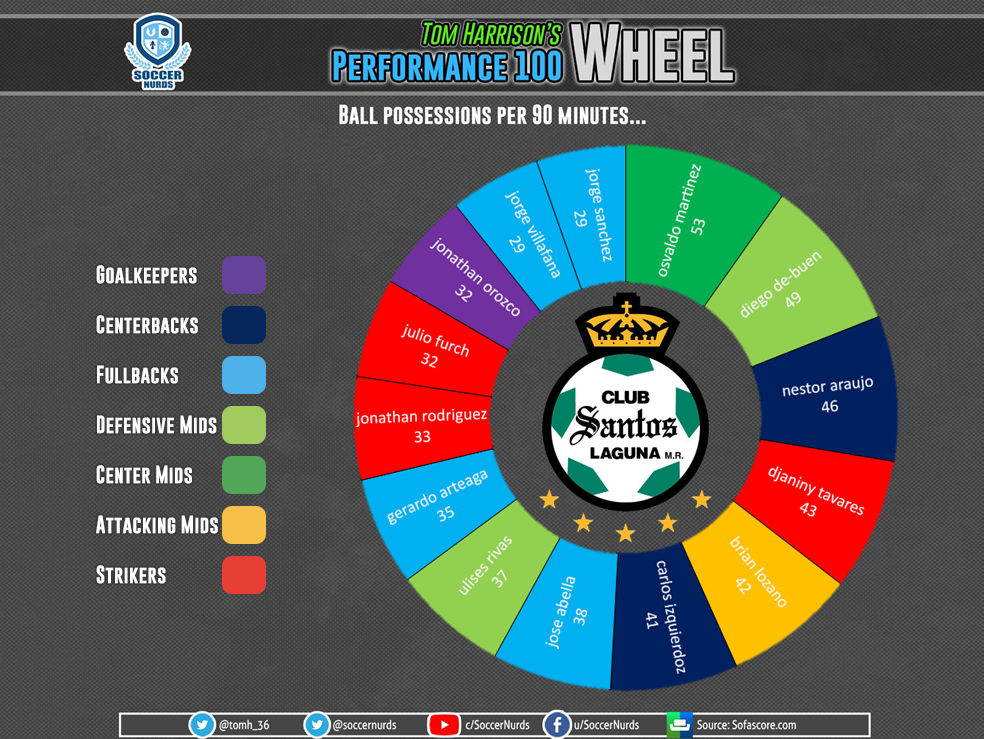 Santos Laguna has usually lined-up without formal wingers in recent seasons, often using Jonathan Rodríguez, Julio Furch and Djaniny Tavares as a flat from three. Width is essential to prevent opponents from compacting a match, which reduces space and makes creating opportunities more difficult, and Santos’ width comes from full-backs as well as Rodríguez and Djaniny drifting wide.

However, attacks are evidently focused on the centre of the pitch. Santos’ central defenders and midfielders, with the exception of Ulises Rivas being ranked below José Abella, all receive possession more often per 90 than the full-backs. Jorge Villafana and Jorge Sánchez’s numbers are especially low, behind keeper Jonathan Orozco.

Although it’s perhaps inaccurate to describe Djaniny’s position as a striker as his role blurs the lines between striker and attacking midfielder, the Cabo Verdean’s 43 possessions per 90 is exceptionally high. Djaniny receives the ball on ten more occasions per match that his left-sided counterpart, the Uruguayan Rodríguez, giving an indication of who Santos prefer to play through. 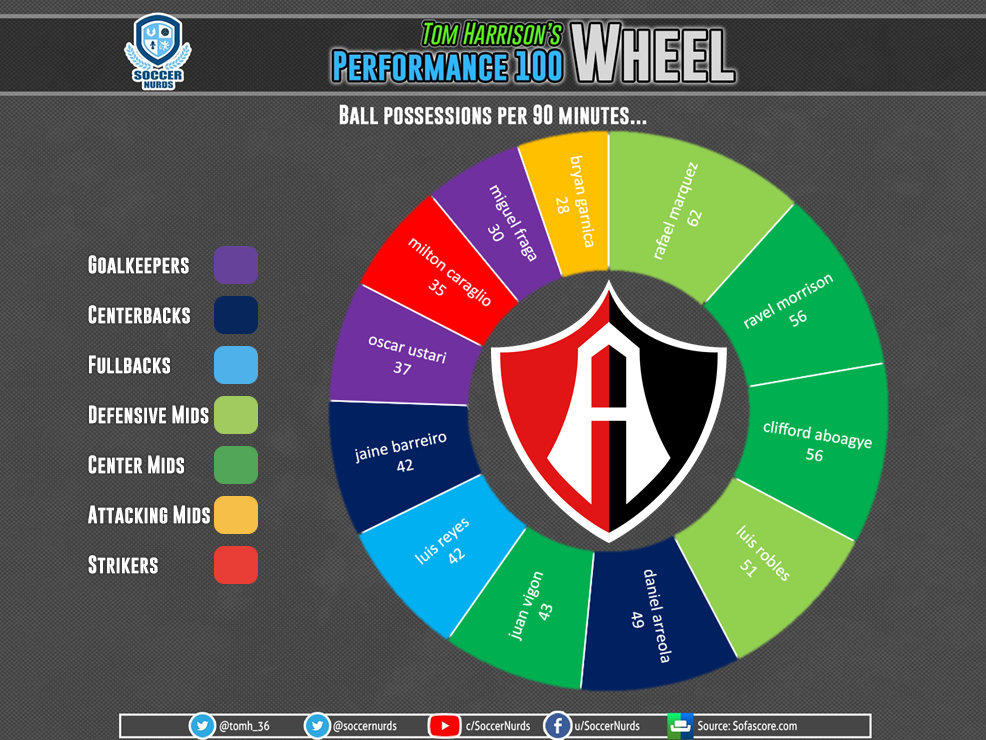 Atlas’ Performance 100 wheel is dominated by central midfielders. Holding-mids Rafa Márquez and Luis Robles (both of whom occasionally play at centre-back) and deep-lying playmakers Ravel Morrison and Clifford Aboagye lead the way for possessions per 90 minutes.

Beyond them, a problem appears, as players that usually operate in the final third are starved of possession. The wheel is impacted by a lack of attacking players taking part in over 500 minutes this season, which tells it’s own story, but the numbers for Milton Caraglio and Bryan Garnica are highly concerning. Both players have gotten the ball less often than keeper Óscar Ustari , and it’s extremely surprising to see Garnica, who many were impressed with when he did get the ball last season, to have fewer possessions as an attacking midfielder than striker Caraglio does.

To learn more about Performance 100 stats and keep up to date with all the new concepts, follow Tom on twitter @tomh_36, and Soccer Nurds, @soccernurds.

Clausura 2018 TV Guide: Where to Watch Jornada 4 of Liga MX and Ascenso MX
Mexico’s Uncapped Xl: The Best Players Yet to Feature for El Tri
To Top