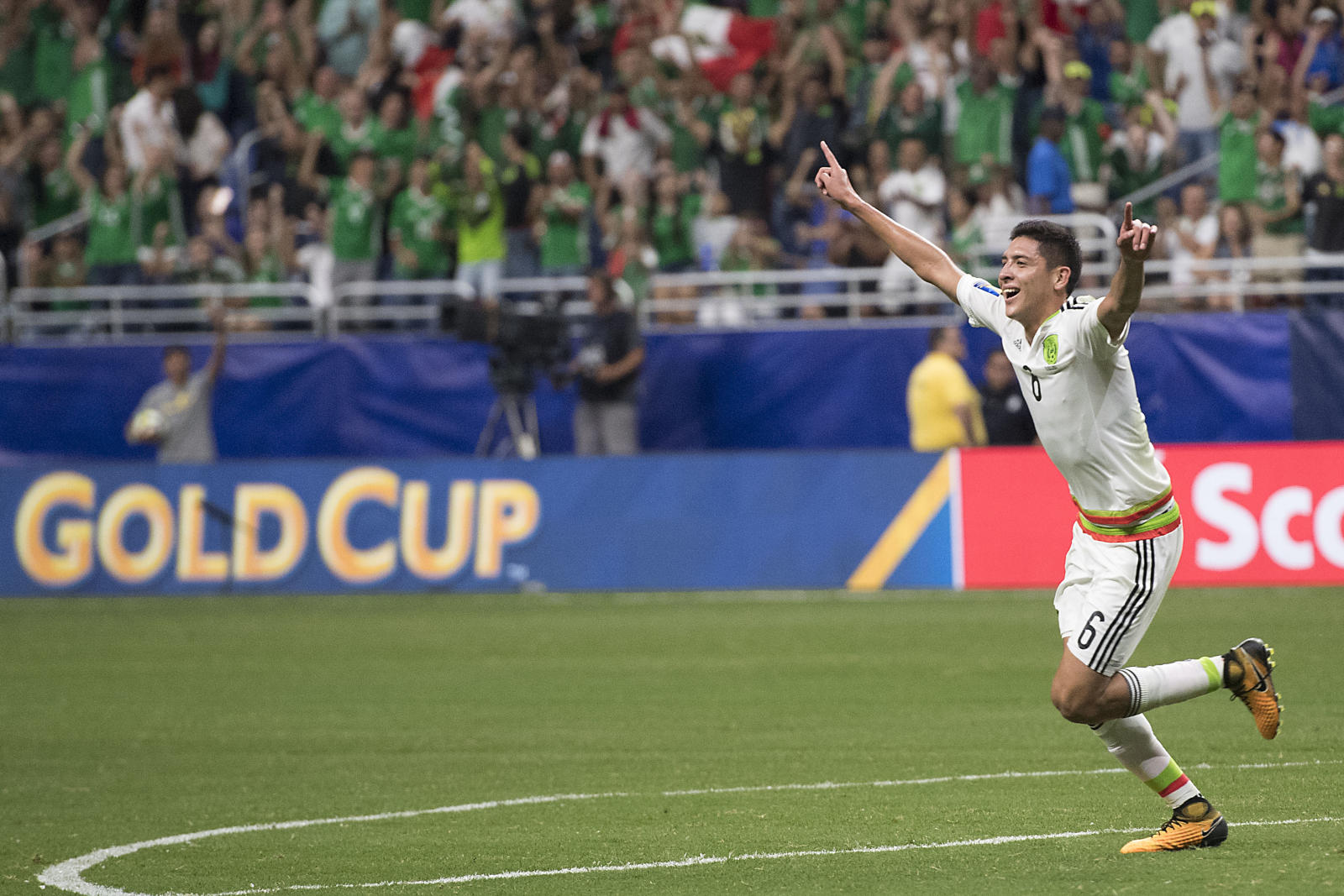 If one closely examined the structure of the Gold Cup tournament, one would quickly realize that the bracket is set up to come as close as one can to ensuring a US-Mexico final, provided both teams come in 1st or 2nd in their group.  Mexico did their part, and as an added bonus, they were able to miss out on having Costa Rica on the other side of the bracket.  Even with an “alternate” squad, Mexico should meet little resistance on their way to the final next Wednesday in Santa Clara?

So why are Mexico fans so worried, then?

Could it be the philosophy of the coach, who prefers fresh legs over continuity?  Is it the lack of scoring from the lackluster group of attacking players?  What about that leaky D that lets even the tiniest of Caribbean nations reach the danger zone with impunity?  For most, it is probably a combination of the three, with a few more peccadilloes thrown in. What is true across the tapestry of Mexico supporters is that this collection of players does not instill confidence.  But it was never going to.  And once we realize that, then we can start enjoying this Gold Cup for what it is:  an experiment to see if a handful of players can crack the full senior side.

This tournament is as close to a pre-season friendly as Mexico has on their (very busy) schedule.  An invaluable opportunity for players to make an indelible impression on the coaching staff.  It has also afforded the coaching staff to try players out in different areas of need.  And of course, the rotaciones have been in heavy rotation. Last week we asked what direction Mexico was trending.  Now we’ll ask the same of some of the Gold Cup squad members.

The Club America youngster made his good summer even better with the level of play he has displayed in the Gold Cup.  He has the versatility Osorio loves. So much so, he has played as a mid, a winger, and a fullback.  He followed up a solid performance vs El Salvador with an outstanding one vs Jamaica.  And he topped that off with a goal vs Curacao.  If Mexico can qualify to the World Cup with a win vs Panama later this summer, then Alvarez will continue to have plenty of opportunities to make the coaching staff think long and hard about putting him on the boat to Russia.

It was always going to be struggle for this group, but someone, anyone, could have stepped up.  No one has of yet.  And it looks like no one will.  It is hard to blame them, though.  It is not as if Liga MX goes out of their way to give locally grown forwards a chance to flourish. The only true striker of the bunch, Cubo Torres, had his moments in Denver vs Jamaica.  He hit the post and did well to maintain possession.  But strikers need to strike.  These have struck out.

If there was no Gold Cup scheduled after the Confed Cup, there is no questiuon Orbelin would have been included on the Roster that went to Russia.  With the Gold Cup on the summer slate, however, Orbelin was the perfect choice to run Mexico’s offense, a position where he led Chivas to their crwoning glory.  Naturally, the Mexico coaching staff, as they have for many other players, has considered Orbelin’s preferred position as radioactive – Orbelin has featured more as a winger as a midfielder and has done as well as to be expected.  Maybe one day we will see him play and succeed in the middle, where he was nominated as one of the best in the Liga MX Balon de Oro awards.

The Sacred Herd’s championship hero was poised to make a big push toward the big boy team. But those plans were derailed in Seattle when he fell awkwardly and broke his arm. He will miss some time as his arm heals, but he is one of the few Mexican strikers in Liga MX who is all but a guaratee to get minutes once he is back and healthy.  He finished the 17 Clausura with his finely coiffed hair on fire.  No reason he can’t do it again.

Another player who was begging for an opportunity to show his worth has not had the best tournament so far.  He gave up far too much space vs both El Salvador and Curacao.  Given Mexico’s current scheme where central defenders are exposed from all sides, not providing cover is unacceptable.  He can certainly redeem himself as the tournament rachets up the intensity.  And we all know that he will get another shot – his number, everyone’s number, will come up again.

Anyone who has watched Liga MX  for the past 10 years knows that Patrulla 77 has the talent, skills, and goal scoring ability to play for el Tri.  For some reason, though, his opportunities to ponerse la verde have been infrequent, at best.  Even so, he is the perfect winger for JCO’s 4-3-3 system. But one has to wonder why Osorio does not rate him high enough to be part of the full senior squad.  Is the same situation as Orbelin?  Would he have made the Confed Cup roster had there been no Gold Cup soon after? Is he too inconsistent? If Elias is in the mood, then Mexico will have a good day. He needs to string more of those together if he wants that ticket to Russia.

The defense has been shored up as far as goals allowed, but teams nowhere near the quality of opponent seen in Russia have been able to attack Mexico at will.  If exposed center backs are a side affect of the system you run, perhaps it is time to tweak the system.  The 2017 Gold Cup, aside from providing a half ticket to the 2019 Blazer Bowl, has been a perfect laboratory for Osorio and his crew to see if he can mine a handful of players  that can help him Russia.  If 3 or 4 players emerge as candidates, then the tournament should be considered a success.

But public and media opinion will not be easily swayed.  Anything less than winning the tournament will be considered a massive failure, and the media, fans, and more than a handful of suits will bang the drum louder and louder for the tried and true remedy for what ails you in Mexixcan soccer:  fire the coach.

Fire the coach:  the original “rotaciones.”