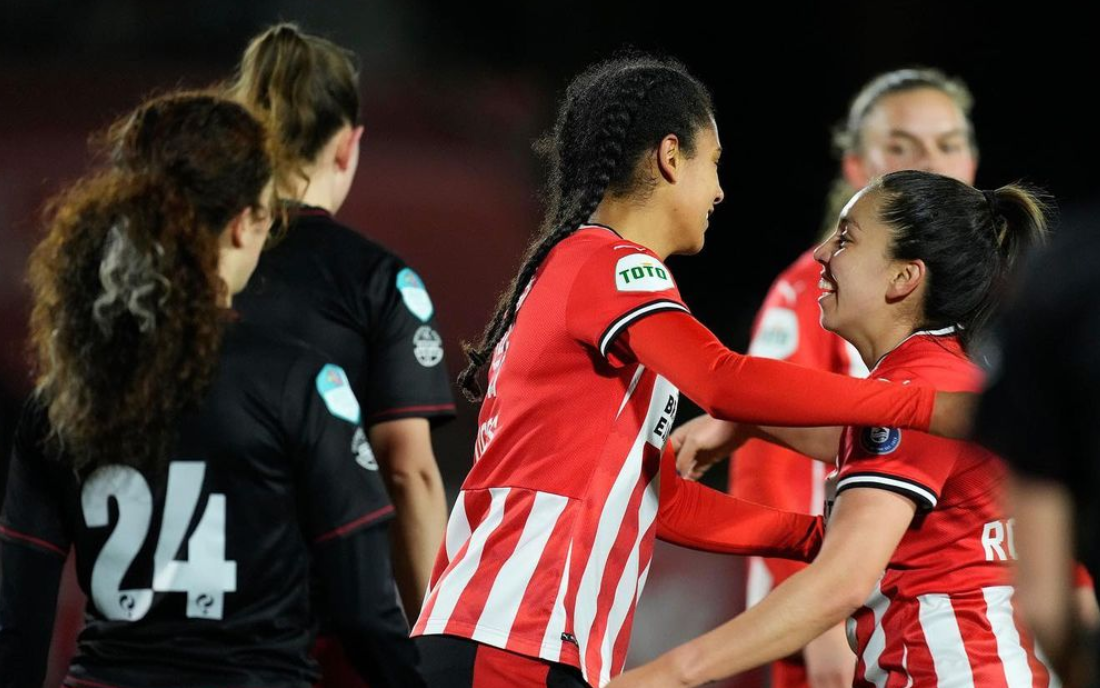 While Estefania Fuentes and U.S. Sassuolo in Italy had last week off, there were a full slate of games elsewhere. A new update as well! We’ve also started following Mexican-American Myra Delgaldillo in Portugal with Braga and look forward to following her progress there.

Mexican-American Anika Rodriguez played 46 minutes and Ceci Santiago was on the bench as PSV defeated Excelsior 3-0 on March 12th. PSV has 27 points and sits atop the table, one point over Twente. They have a crucial midweek match against third place Ajax on Wednesday at home before traveling to Den Haag to face fourth place ADO Den Haag on Saturday, March 21th at 12:15 PM CEST.

Amanda Pérez was not in the lineup as Sporting beat archrival Benfica 1-0 on March 13th nor was she in the lineup for Sporting’s Taça Da Liga (League Cup) quarterfinal match against Benfica scheduled for Tuesday afternoon. The win in league play put Sporting atop the league with 16 points, one ahead of Benfica.

Mexican-American Myra Delgaldillo played 66 minutes however SC Braga lost 4-1 to FC Famalicão on March 14th. Braga is in fourth place with 12 points, and they’ll host Maritimo on Sunday, March 21st at 11:00 AM WEST.

Kenti Robles played all 90 minutes as Real Madrid beat Atlético Madrid 1-0 despite going down a player in the 13th minute. Charlyn Corral was not on the gameday roster for Atleti, who fall to fifth place on the table with 41 points, one behind Madrid CFF for fourth place and behind Barcelona. Real Madrid meanwhile stays in third place with 47 points, one behind second place Levante and 10 behind Barça. Real Madrid host Levante on Saturday, March 20th while Atlético Madrid face 13th place Sporting Huelva also on Saturday, March 20th.

Pamela Tajonar and Logroño got a 0-0 shutout against Sevilla on March 14th. Logroño however sunk to last place in the league with 16 points, one behind both Real Betis and Deportivo Abanca, who they’ll host this Saturday, March 20th.

Kiana Palacios came on in the 66th minute for Real Sociedad as they beat Tenerife 2-1. Sociedad are in sixth place, one point behind Atlético Madrid. They’ll host Sevilla on Sunday, March 21st at 1:30 PM CEST.

Rubí Soto was an unused substitute as Villarreal drew Unión Tenerife 1-1 on Sunday. Villarreal are in first place in the Segúnda División with 41 points, 11 over second place Albacete with five games left. They’ll face Cáceres on the road on Sunday, March 21st at a time still to be determined.

The Chicago Red Stars held a closed-door friendly against the University of Missouri on March 13th. No details of the match were released, so it’s unknown if Katie Johnson or Mizzou’s Julissa Cisneros got any playing time.

Sky Blue FC has been doing trainings with little of note, except for this amazing video from Sabrina Flores.