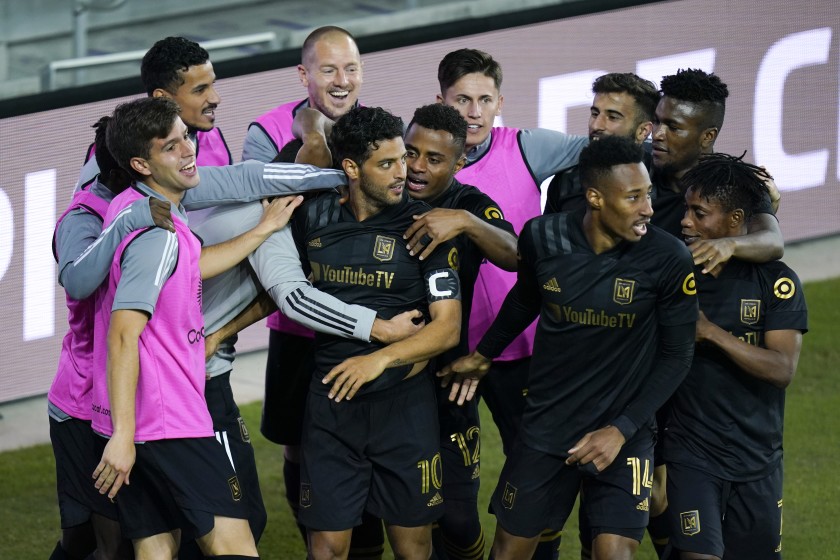 LAFC beat Club America 3-1 on Saturday night in the most anticipated match of the CONCACAF Champions League. Well, the most anticipated in recent times. The first was against Leon. The second was against Cruz Azul. And match after match, LAFC – through Carlos Vela – did what no other MLS team could do. They beat three Liga MX teams to make it the CONCACAF Champions League final.

It was an emotional night on the field. Two red cards were given, a punch was thrown, Vela got a brace as soon as the second half started, and Miguel Herrera was sent off. It was also an incredibly intense match OUTSIDE of what everyone saw on the pitch and could instead be found on the social platforms.

Back in 2015, I was a senior in college that also happened to be a mom and was five-months pregnant. I ran out of time quickly back then with so much school and it was hard to study for finals. So, to my good fortune, one of my professors offered something to the whole class early in the semester – in exchange of a final test at the end of the year, we could write a longform paper on any subject relevant to the Communication Class he led. I took that choice instantly and knew I would finally have a chance to write about something that I found hard to do at my USC-Football-Obsessed establishment: soccer. Specifically, the undertones that arose online during US Men’s National Team matches against Mexico. I went to the place I knew was filled with good examples – the wonderful and colorful world of twitter. I remember as I was writing that paper and using examples from both sides feeling very self-aware of my Mexican American identity. Most specifically, (and probably not a surprise to anyone reading this) how much hate I could feel from the American side. The jokes were more blatantly obvious back then. Snarky remarks about who would take the immigrants at the end of the match, gaslighting questions about how people who were born here could root for a country they potentially had never gone too – the works.

I have to hand it to those still online. Five years later, they have become much more skillful in their ability to tweak the banter so it’s not as apparent, but ninety minutes was enough to see that those repressed feelings haven’t gone away and were instead in need of a therapeutic release.

And why should that be surprising? This year has been instrumental in showing us that the more things change, the more they stay the same.

“He should’ve been knocked out cold”

The instinctive reactions that arose as the match grew more intense seemed to be specially prepared for one that had Mexico’s most decorated team on one side of the field. As the intensity grew, the more impulsive it became to tweet those feelings out. Feelings that didn’t seem to awaken when MLS teams faced off against teams from other countries. Feelings that felt unwarranted against a goalkeeper that has never been at the forefront of controversy, who happened to take advantage of a flawed system that Vela was applauded for exploiting in a previous match. Feelings for a coach who had former examples of confrontations that helped weaponize why he deserved to be treated the way he was on Saturday night.

I remember writing in my paper way back when about how the social and political factors that exist in our everyday world play into our digital narratives. I know that’s not lost on whoever reads this. Sports are inherently political and if anything, create microcosms of the realities we face in the outside world.

So, here we are again. At the helm of American exceptionalism. The obligation to refer to oneself as “not that.”

This player deserved a red, but the other didn’t. These calls aren’t being made in our favor. That team is reckless, and we are not. That coach deserved to be punched.

Vela helps further perpetuate that. In fact, in a year where we have seen outlandish conservatives cling onto an outsider who validates their feelings, Vela is the perfect token boy for the discourse that occurred on Saturday evening.

A Mexican player who has removed himself from national team obligations, has never played in their domestic league at a senior level, routinely looks to omit himself from having to interact with their media and now has a chance to bring Major League Soccer long-awaited glory by beating the top Liga MX team of the last decade. You couldn’t write this more appropriately.

Don’t get me wrong, I have enjoyed watching Vela at games the past few years as an “official” aspiring journalist. I’ve sat in press conferences, round tables and stood trying to get a place in mix zones to capture video of him talk about his adventures in MLS. And while being a Mexican-woman-focused-on-English-language-Mexican-soccer content comes with natural feelings of alienation, the casual racism that presented itself as LAFC came from behind to beat America really painted a clear picture.

I could feel those feelings of hate again. The tug and pull of Ni de aqui, ni de alla. Of someone who covers Liga MX and Major League Soccer who could see what one side really thought of the other. Upsetting but unsurprising.

In true 2020 fashion, I’ll sit next to the people that said those things online in a post-COVID world. I’ll engage with them; I’ll say my formal greetings and be the better person. I’ll show passion but make sure I maintain objective emotion, the way so many of my mentors have taught me to be. The way they have been forced to be for many years before I joined them.

And if LAFC should claim that victory as one of the best Mexican players in my era delightfully lifts that trophy, I’ll give credit where credit is due.

But I won’t forget how you made me feel. How you made so many reading the things you felt compelled to post feel. I won’t forget those tweets, no matter when you decide to delete them. I can only hope you reflect on the two backward steps you took on one of the final Saturdays of 2020 and take three steps forward in the future. If not, you can always take a hard look at your reflection in your potential Champions League trophy and smile at your choices.