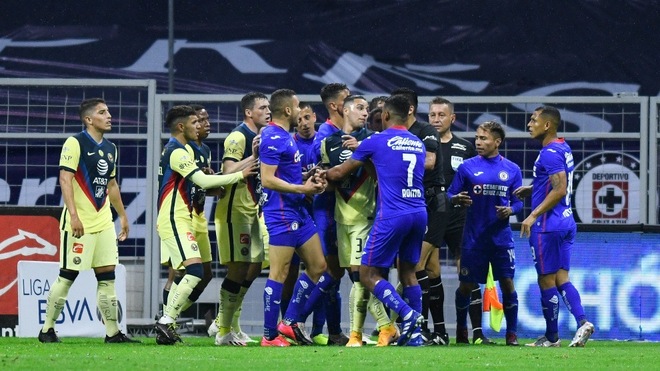 It’s hard to believe that we are more than two-thirds of the way through the season already, and are starting to enter the point in time where we’re seeing Clásicos on a weekly basis. It made sense to schedule it this way, since while there was a slim chance there’d be fans in the stands, it was better than the zero percent chance in the first couple of weeks. It’s lead to where we are now: having had the Clásico Nacional last weekend, the Clásico Regio and Clásico Joven this past weekend, the Clásico Capitalino this coming weekend, and the Clásico Tapatío the weekend after that (Which sounds like a lot of fun!)

Except that this past weekend’s matches were completely boring.

I must admit I didn’t watch every minute of every match; I fell asleep just before the 90 minute mark in the Clásico Joven. But aside from the pushing and shoving between Jonathan “Cabecita” Rodríguez and Oscar Jiménez, I saw enough.

1.) The Clásico Regio wasn’t the same without the fans – This was the first match where I felt that the absence of fans really impacted the game. This isn’t a dig at the Clásico Nacional or any fan base, rather a statement that this rivalry in front of those fans tends to make it that much more palpable. And aside from André-Pierre Gignac getting into some pushing and shoving with Sebastián Vegas, there wasn’t much fight from either team. Tigres went up in the 24th minute and Monterrey looked out of ideas. They shot often, but only four of their twenty-two wound up on frame and more importantly none of them went in. And while calls for Turco Mohamed’s ouster have been around for a while now, getting played off of the pitch by their cross-town rivals is not going to help his case.

2.) The Clásico Joven wasn’t enjoyable to watch – This one had such promise with both Cruz Azul and América playing attractive soccer heading into it, but ended up being a dud.  Maybe it was the pouring rain at Estadio Azteca that killed it. Maybe it was the fans being absent. Maybe it was the injury to América goalkeeper Guillermo “Memo” Ochoa during warmups that cast a pall over this game, but it never felt like it got started. The game never seemed to find a rhythm, and even the rare scoring chances seemed hopeful at best. Starting at 9:30 PM local time was also a poor choice, since it didn’t end until after 11:30 PM local time (and 12:30 AM on the east coast).

3.) While the last two clásicos didn’t live up to the hype, the next one could – I know I thought this about the Clásico Joven, but the Clásico Capitalino really has the potential to live up to the billing. No one has scored more goals than Pumas (21) than América (22), and both teams are coming off of disappointing draws (Pumas drew Necaxa 1-1). The teams have just three losses between them, and this could very well be a matchup we see at some point in the Liguilla. Hopefully these factors give this match enough fire to make it a Clásico worth remembering – or at least staying awake until it ends.