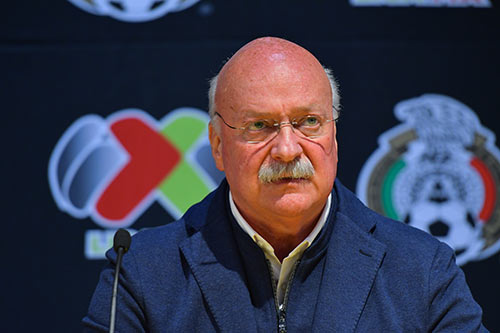 With the coronavirus outbreak in full swing in nearly 118 countries, including Mexico and the United States, the FMF and Soccer United Marketing announced the cancellation of Mexico’s friendlies against the Czech Republic (March 26) and Greece (March 29).

Directly, the United States’ own travel ban on European arrivals outside of Great Britain, ensured that Mexico’s opponents during the international break would not be able to travel to play in the United States as opponents. In a press release, the FMF announced that all ticket sales to both games would be refunded from the point of sale.

The disease caused by the novel coronavirus, officially known as COVID19, is a viral upper respiratory infection that has incubation periods of more than 14 days and is more severe and communicative than is traditional influenza. The virus can also remain viable on hard surfaces for up to eight hours without human contact and can be spread through direct contact or through air. Although many symptoms of the disease are similar to traditional influenza-causing viruses, and its pattern of mortality in terms of age appear similar, its severity and ease of spread (and long viability outside of the body) make COVID19 a disease has forced cancellations of large gatherings and forced nations, including the United States and Mexico, to face growing vulnerabilities in its supply chain and inability to prepare for such an epidemic.

The major events that have been cancelled, suspended, or seasons ended, include both La Liga and Serie A and lower divisions in Spain and Italy, Bundesliga (and German lower divisions), the CONCACAF Champions League, Copa Libertadores, UEFA and CONMEBOL World Cup qualification games, the 2019-20 NBA season, MLS, South by Southwest, the 2020 NCAA men’s basketball tournament, and the Australian Grand Prix. Matches played in England are also expected to be played behind closed doors this weekend before emergency meetings take regarding the rest of the season on Tuesday.

In Mexico, some health officials believe that COVID-19’s presence in Mexico, brought originally  by trapped cruise ship passengers traveling between California and Mexico’s western regions, could enter a community transmission stage during the time in which the international break would have been held.

In the United States and around the world, many schools, universities, central gathering places, and businesses have shut down or are preparing to move to remote (online) service only. Some entities that could also move to a remote work basis could also be the U.S. Congress, where close contact and interchange of visitors from anywhere and everywhere makes political officials and their staff vulnerable targets to contract the virus.

Club football in Mexico, including Liga MX, has not seen cancelled matches. But for the safety many in Mexico and to protect the loads on its medical system, cancelling or suspending the Liga MX Clausura 2020 tournament should happen. This is given that testing for COVID-19 has not been ramped up in any meaningful way in the country and that without testing and screening at scale, there is little to genuinely understand what the spread of the coronavirus and death by COVID-19, and the longer term effects on social order and stability in the country.