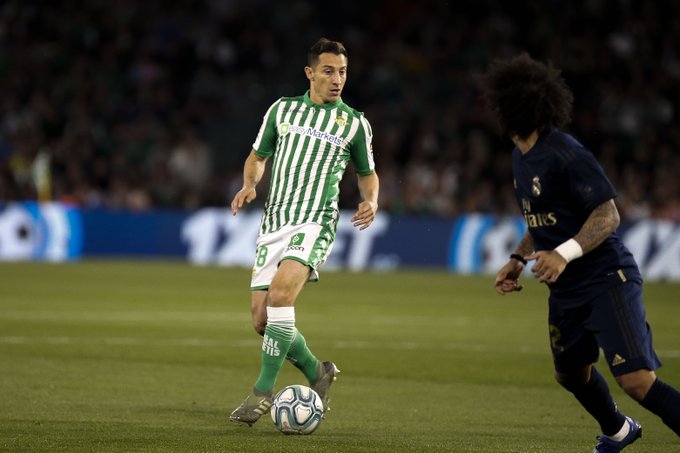 Guardado and Betis with the Upset

Real Betis played both host and underdog to La Liga powerhouse Real Madrid on Sunday. Los Verdiblancos did not seem intimidated by Los Blancos as they attacked with fury and valor. Andrés Guardado got the start as he helped his team control the mid and kept Los Merengues in check (Diego Lainez was once again not called up for this competition). Betis finally broke through in the 40th minute of play, thanks to the quick thinking of Sidnei. Goalkeeper, Thibaut Courtois, was distracted by a possible foul in the box as Sidnei took advantage of the 1-0 lead. Betis’ early lead and celebration were short-lived as Los Blancos earned a penalty kick in stoppage time. Los Blancos found the equalizer thanks to a perfectly executed goal by Karim Benzema. Guardado played the full 90 minutes and almost contributed to the scoreboard in the second half with a direct shot from distance. Los Lobos’ night did not end there as they made several attempts to finish strong and secured a win in the 82nd minute thanks to a breakaway by Cristian Tellor.

Atlético 2-2 Sevilla (Herrera did not play)

Álvarez Back in Business

Edson Álvarez got the start for The Lancers against Utrecht in the Semi-finals in the KNVB Cup on Wednesday but with only 81 minutes of play, the Mexican defender wasn’t able help his team avoid elimination. Utrecht had luck on their side as they capitalized on the Ajax mistakes and after Utrecht took an early 1-0 lead in the first half, Álvarez boldly committed a foul inside the box to avoid a direct shot at goal. Unfortunately for the Aztec and the Lancers, Utrecht was awarded a penalty that they capitalized on for the 2-0 win.

Álvarez saw action once again on Saturday during regular season play in the Eredivisie by being subebd in at the 82nd minute after Ajax had secured the 3-1 lead and eventual victory against Heerenveen. With only goal differential keeping Ajax in the top of the standings over AZ Alkmaar, only time will tell if Edson will contribute to the necessary victories the team needs to maintain their lead.

PSV 1-0 Groningen (Gutiérrez did not play)