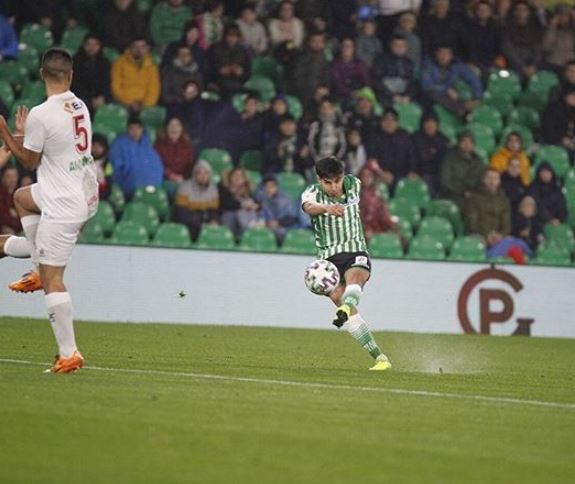 After several rumors of Diego Lainez’s exit from Real Betis, the young Azteca has seen an uptick in minutes the past few weeks. Lainez got the start for Los Verdiblancos against Antoniano in Copa Del Rey on a rainy day. Diego played all 90 minutes of the game. The downpour did not discourage Lainez and Los Lobos who dominated the match and won 4-0. DL20 was tackled outside the large box setting his team up for the free-kick. Lainez took the kick and made a remarkable goal that painted the top right corner of the net. DL20 was a major piece of their offensive puzzle as he distributed the ball, opened spaces and caused disruptions for the defense. Lainez showcased his skills and helped extend skipper Rubi’s trust.

Sevilla 1-0 Bergantiños (Hernández subbed out in the 79th minute)

Jiménez for the Knockout

Raúl Alonso Jiménez was on a five-game scoreless streak heading into the Norwich City clash. On paper, the Wolverhampton Wanderers looked to be the favorite, but the Canaries were ready for a battle. The Yellow’s attacked first and often and caught the Wanderers off guard. It took the Canaries 17 minutes to open the scoreboard, thanks to a counter-attack that caused the Wolves’ defense to collapse. Todd Cantwell was left all alone in front of the goal for the direct shot. The Wolves helped Norwich build momentum and kept their fans engaged until the 60th minute, thanks to a header by Romain Saïss. RJ9 held his composure throughout the match and seized his opportunity in the 81st minute when Norwich’s goalkeeper was pressured and deflected a ball in front of Jimenez. RJ9 took his time and placed the ball on the top right corner of the net for the lead and the win.

GAME-WINNING GOAL from the 🇲🇽🐺!

Jesús “Tecatito” Corona was on fire this week with four assists out of three competitions. Tecatito started all three matches with over 244 minutes of play. Porto won all three encounters, 3-0 over Tondela, 1-0 over Santa Clara and 4-2 over Chaves. Corona was unstoppable as he produced laser passes and set his teammates up for impressive goals. Corona remains a staple player for the skipper, Sérgio Conceição, this season.

Herrera Triumphed over Guardado and Lainez

Andrés Guardado and Diego Lainez from Real Betis were pitted against Héctor Herrera from Atletico Madrid. Los Verdiblancos played host to Los Rojiblancos on a highly energetic and entertaining contest. HH and Guardado got the start for both teams and played their roles superbly. As the game progressed, the home team had their fans on their side as they came close to open the scoreboard in the first half. The Colchoneros defense proved to be too much as they rejected every ball that came their way. The game opened up in the 58th minute thanks to Ángel Correa’s quick recovery of the ball for the 1-0 lead. After 70 minutes of play, Guardado was subbed out by fellow Azteca, Diego Lainez. Lainez added fresh legs and a new threat to their offense. Atleti took advantage of another opening and added to their lead in the 84th minute which put the game in their hands. DL20 took a long-range shot in the 87th minute, only to land in front of the Atleti goalkeeper’s hands. Verderones were able to save face by scoring in stoppage time, thanks to a deflection from the goalkeeper who placed the ball in front of Marc Bartra who put the ball away.

Napoli 2-1 Sassuolo (Lozano did not play)

Ajax 4-3 Telstar (Álvarez did not play)