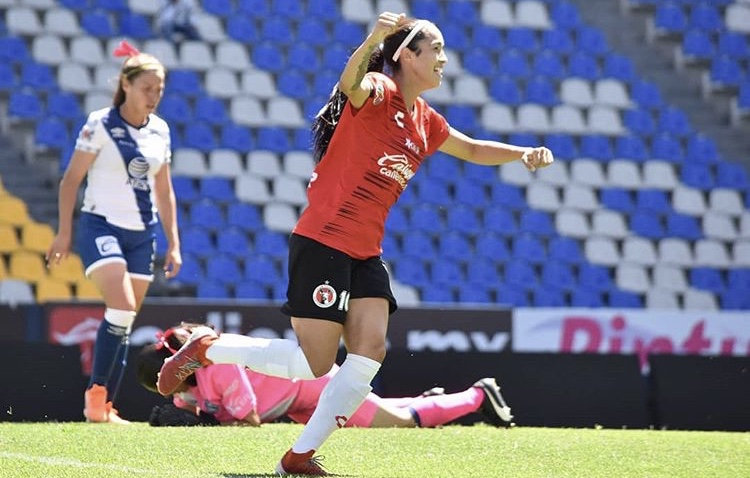 Liga MX Femenil picked up again this past weekend after a bye week and with only a few weeks of the regular season left, Week 14 did not disappoint with its excitement and its disappointment (off the field).

1. Renae Cuellar is making the case for Mexican-American players. The remarkable thing here is that the Liga MX Femenil deprived the teams, the players personally and fans of being able to witness a more holistic league for four seasons. Still, those in charge eventually caved on the strict regulations including the inclusion of dual-nationals and because of that, players like Xolos Femenil’s Renae Cuellar are taking the league by storm this season. With her opening goal against Puebla on Sunday, Cuellar brought her goal-scoring stats to eight goals in 12 matches–just two goals off her all-time club career record with plenty of time in the regular season (and potentially more chances in the playoffs as well). After traveling all over the world from Sweden to Israel and Iceland to play professional soccer, to see the Bellflower-born forward seizing an opportunity nearly six years later in the country where her roots stem from (and even helping her regain attention from the national team) just adds to the ever growing evidence of how much value players like her add to the league.

2. There’s a huge gap within the Liga MX Femenil teams. In all honesty, this can be said about most leagues. Generally those with the ability to invest more will do so and in turn, will have better players and better results on the field. But when you see almost half of this jornada’s matches have a goal differential of four goals, you start to wonder about the discrepancies between those up top and those at the bottom. Granted, the Liga MX Femenil does have its surprising moments and this weekend was no different. Jessica Vazquez getting the opening goal for Juarez off a strong shot against second place Pachuca was great to see. So was Leòn’s late penalty conversion against Monterrey and the fact that they were able to limit the undefeated league leaders to only three goals. Chivas Femenil might have had a stunning upset against Santos on Sunday but the gap does exist dramatically in the league and unless more teams are willing to make serious decisions when it comes to player selection in the way that Atlas Femenil acquired Alison Gonzalez (who has seven goals in 14 matches this season and 12 goals overall with the club), the competition won’t progress as swiftly as it should.

3. The Veracruz situation is (not surprisingly) having a greater effect on the women’s team. Even the Liga MX Femenil is not immune to the absolute catastrophe that is Veracruz. Aside from the fact that the men’s side hasn’t won a match in what feels like 84 years (it’s only been 413 days… only), it was recently reported that the organization has not paid its male players in the past couple months and players were allegedly threatening not to play on Friday against Tigres in protest which could potentially result in the entire weekend of games being suspended. The FMF stated in a press release Tuesday that no Veracruz player had formally complained about the lack of payments and that the team has until Wednesday to pay the fees, stirring up the speculation on the men’s side but even moreso, the huge impact this has for the women’s side as well. Nobody is getting paid within Veracruz at the moment but for the female players who do not have the support of sponsors, this causes incredible barriers for them as professional players. Members of the team are reportedly paying for travel, hotel and food expenses themselves and are debating calling on other clubs within the league to help them pay off some of the debt owed. The situation overall is alarming but the impact it has had on women because of yet another example of limited aid is on its own considerably appalling.