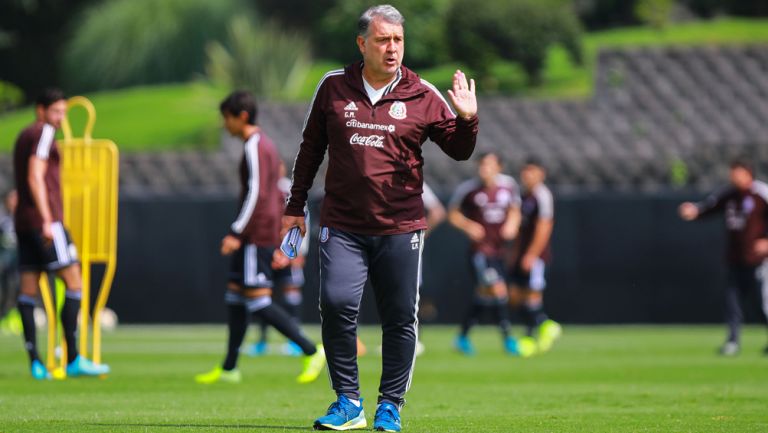 On Friday evening, Mexico defeated Bermuda 5-1 at Bermuda National Stadium to open its CONCACAF Nations League A League campaign with a flying start, putting the hosts’ own hopes of remaining in the A League level of CONCACAF’s Nations League in peril in process, depending on what El Tri manage to do against Panama on Tuesday, October 15. It was a game that El Tri was obligated to win given their history, and provided moments for Jose Juan Macias, with a brace, to prove that there was tremendous validity to the excitement from international scouts over the Leon striker as a goalscorer. It also provided a couple moments of brilliance for Hirving Lozano and Hector Herrera in the second half, as the match moved out of reach for the hosts.

But it was also a game in which El Tri received their most complicated challenge strategically throughout most of the game. Bermuda often pressured El Tri and regularly broke through El Tri‘s lines of pressure. However, when it mattered and when they had the chances, El Tri hurt Bermuda for its goals, including triangulations that led to the early goals by Uriel Antuna and Jose Juan Macias, with Hirving Lozano playing the role of a key conduit for both. By the time the second half was 15 minutes old, the game was practically out of reach with Bermuda starting to lose their concentration and positioning frequently enough where they abandoned their high pressure game and turned the game into one that Mexico placed out of reach on a direct free kick by Hector Herrera 25 minutes into the half.

But if that win was about overcoming an unfamiliar opponent, Tuesday’s opponent in Panama is the exact opposite, with El Tri playing the Canaleros at least once in every World Cup cycle since 2010. Despite Mexico’s record of only five defeats to Panama and none since the 2013 Gold Cup, the Canaleros have not been an easy opponent for Mexico to overcome. El Tri has not won a match by more than one goal against Tuesday’s opponents since 2005, when they defeated the Canaleros 5-0.

There is a lot of hope that the processes around the national team can change. It is exactly why Gerardo Martino was brought in and a part of the reason that Martino has often used both the mini-cycles and his high intensity training approaches. But for the results to show, as Martino noted in his pre-match press conference, it has to be in an environment where the results genuinely matter and where the added training and adjustments are expected, not exceptional.

But in the near term, while the FMF struggled as to how to handle the Veracruz question regarding the club aspect, El Tri is preparing for a national side that is not as disciplined to an organized concept of play as Bermuda was. But Mexico’s reaction in defending cannot count on Nakhi Wells or Gabriel Torres taking heavy touches every time they manage to receive the ball with space to shoot in central shooting positions.

In the Nations League, Panama’s situation (1-0-1, 3 points) is nearly identical to the one Bermuda came into its game with Mexico, except for a worse goal differential. But while the only thing the Caribbean side had to worry about was qualifying for the Gold Cup (which they may still do despite their position in the relegation zone out of the A-League), Panama has an obligation to improve its FIFA Ranking as soon as possible to avoid being the first CONCACAF World Cup qualifying team from the 2018 cycle to be relegated to the Bottom Tournament of the 2022 FIFA World Cup qualifying tournament (which guaranteed at best a shot at the inter-confederation playoffs). In this way, Panama is obligated to obtain results against Mexico in its final two group stage games and hope one of Honduras or Jamaica slip up against their weaker Nations League opponents. Mezico’s rank of 12 in the current FIFA rankings (and top among all CONCACAF national teams) means that their place in the easier Hezagonal World Cup qualification tournament is all but officially sealed.

The match kicks off on October 15 at Estadio Azteca at 9:30 PM Eastern DST and can be seen on UniMás, TUDN, and FloFC in the United States.