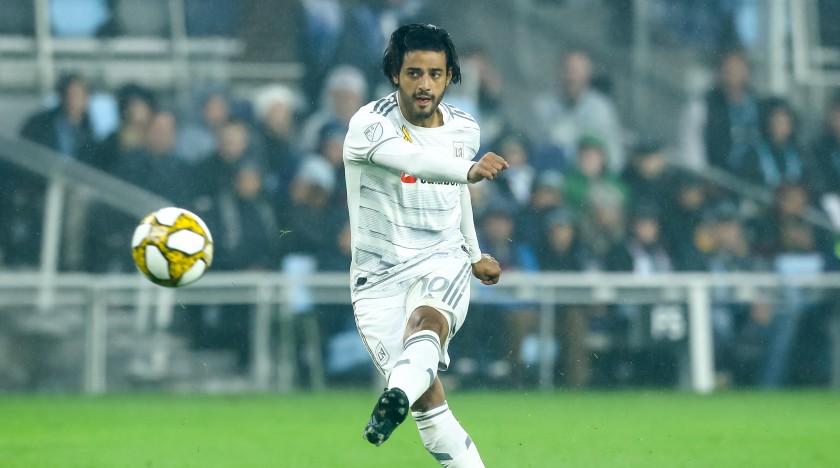 Carlos Vela’s plan to be the best in the league continues to gain traction after LAFC’s two matches against Houston Dynamo and Minnesota United this week. Both carried a significant albeit varied weight for both Vela and the rest of the team, with Wednesday’s 3-1 victory against Houston Dynamo securing them the Supporters’ Shield and officially deeming them the best team of the regular season. Vela’s penalty in the 23rd minute of the match would help the team equalize and progress to their eventual win, get him his 30th goal of the season and award him his first official title with any club team he has ever played for.

While the team might have undoubtedly solidified their number one position for the regular season, Vela is still fighting for his although he is not far off from succeeding. The match in Minnesota ended in a 1-1 draw but not without the Mexican player scoring his 31st goal of the season and tying Atlanta United’s Josef Martinez historic record from 2018. With one match to go against Colorado at home (and even with Zlatan two goals behind), one can’t help but think all the stars will align for Vela to secure yet another record in MLS history and finally put an end to the debates about whether or not heading to LAFC was a good move for him.

While it’s not the complete Vela-like spectacle of a MLS-takeover, Uriel Antuna’s own run of form this season with the LA Galaxy would be hard to discredit. On loan from Manchester City, Antuna has had an uplifting year thanks to Dennis Te Kloese bringing him to Southern California. A regular starter for the team, Antuna has been able to gain more confidence on the field and coupled with his recent rise with the national team, allowed him to improve his ball control while taking full advantage of his speed. The Mexican forward earned his sixth goal of the season this past weekend in LA Galaxy’s 4-3 loss to the Vancouver Whitecaps and will continue to be a valuable asset for the team as they move on to the playoffs for the first time since 2016.

Erick Gutierrez Comes Back With A Bang

The former Pachuca midfielder returned to competitive play this past weekend for PSV after suffering a leg injury at the beginning of the month and contributed to PSV’s 4-0 win against PEC Zwolle. Though the last goal of an already dominating match, scoring his first goal of the season for the team was just the kind of return Gutierrez needed to make to regain momentum especially considering he was subbed in at the 79th minute. Since the departure of his former teammate and close friend, Hirving ‘Chucky’ Lozano, “Guti” has had to work to make a case for himself as the sole Mexican left for the club. Hopefully this goal will bring him more playing time with some Europa League and regular season matches coming up.

Wolves and Raul Jimenez finally got their first win in the Premier League this past weekend with a 2-0 victory over Watford. Watford currently sit in last place in the standings but Wolves were able to secure the lead and contain dominance throughout the majority of the match and though Raul was subbed out in the 80th minute, the win was exactly what Wolves needed. Couple this with the penalty shootout the team was able to win against Reading on Wednesday, Wolves find themselves on the right food once again. Their next season match against reigning champs Manchester City will be anything but easy but might be what the team needs to continue on a good run.

Villareal 1-5 Real Betis (Guardado in the 18 but did not play, Lainez subbed in at 79th min)