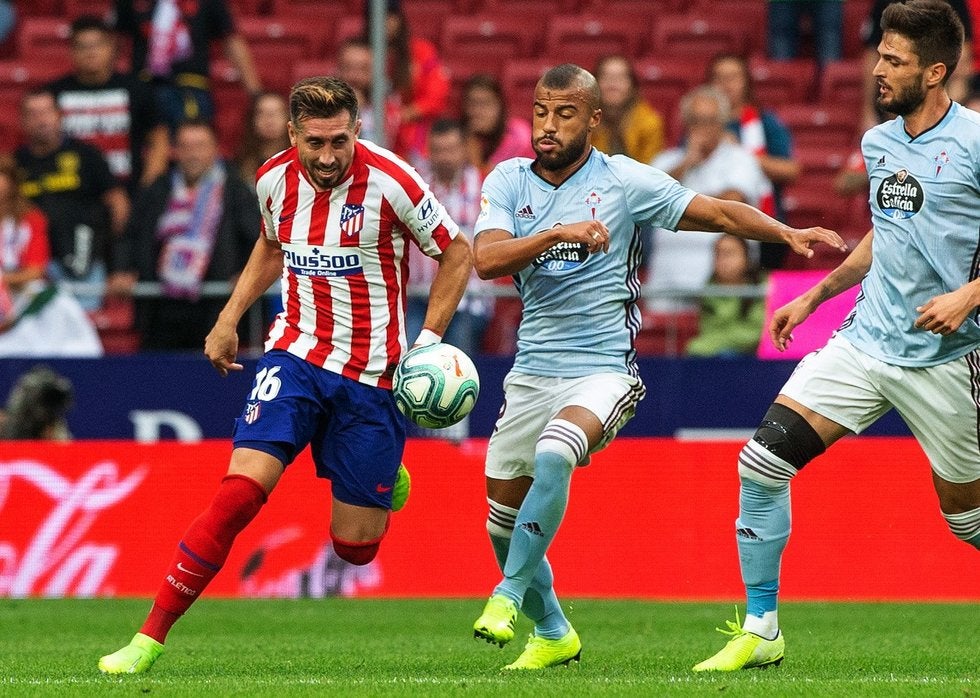 The two Mexican Internationals played against each other in some La Liga regular season action but not before exchanging pleasantries in the tunnel to the pitch.

Hector Herrera got the start after his heroic header earned him the trust of Diego Simeone earlier this week. Herrera was involved in various plays throughout the match to help Los Rojiblancos attack. But Celta de Vigo’s defense led by Araujo negated a handful of plays that would have led to potential goals and kept Los Colchoneros from finding the back of the net. Celta’s lack of shots did not help their cause and the game ended in a 0-0 draw. HH was subbed out in the 60th minute while Araujo played the full 90 minutes.

Chicharito Looked to Score Against His Former Club

Sevilla was riding an undefeated streak leading up to their clash against Real Madrid. Los Blancos were looking to bounce back after a humiliating 3-0 loss to PSG earlier this week in Champions League. After a much-anticipated match against his former La Liga team, Javier Hernández was called off the bench in the 69th minute of play. Chicharito created opportunities and almost found the equalizer but it was called offside and eventually ran out of time. Real Madrid took the points and the win to jump to second in the standings while Sevilla dropped down to fifth on the table.

📜 REPORT | Benzema scores the only goal as Sevilla fall to their first defeat of the season (0-1). #vamosmiSevilla #WeareSevilla #SevillaFCRealMadrid

Real Betis 0-0 Osasuna (Guardado was subbed in the 78th minute, and Lainez in the 18 but no minutes)

Carlos Vela continues to find the back of the net. Unfortunately for the Black and Gold, they could not break their four-game winless streak. After being down 1-0 in the first half LAFC desperately looked for the equalizer on every possession and with an aggressive and dangerous play from Chris Mavinga on Latif Blessing in the 93rd minute, Toronto would have been victorious. But after the play went to VAR, a penalty was awarded and Vela was able to convert the shot, getting himself his 28th goal of the season and salvaging a point for his team.

Stalemate at the Banc.

🎥 Highlights from our 1-1 draw against Toronto. #LAFC pic.twitter.com/2hNktxwN5l

LA Galaxy is building momentum leading up to the playoffs after getting a much needed 2-1 win against the Montreal Impact this past Sunday. In the 31st minute, both Jonathan dos Santos and Uriel Antuna connected and found Zlatan Ibrahimović in front of the small box for the direct shot to get the home team the lead. Montreal quickly found the equalizer before the end of the half but Antuna capitalized on a perfectly placed pass and found his goal in the 50th minute.

Chucky Comes Off The Bench

The Italian powerhouse Napoli flexed their muscle against defenseless Lecce in a 4-1 win. The Gli Azzurri dominated both in the stats sheet and in the scoreboard. Hirving ‘Chucky’ Lozano did not get the start but was called to action in the 73rd minute of the match. In the time he had, Lozano caused added disruption and contributed to setting up various plays. Chucky continues to bring added attention and at times double coverage. His constant playing time shows just how quickly he has earned the trust of Carlo Ancelotti.

NEXT MATCH: Wed., September 25th against Cagliari (Serie A)

Edson Álvarez continued to see valuable minutes as Ajax faced off against their fierce rivals, PSV and almost allowed for a Mexicans Abroad showdown in the Eredivisie were it not for Érick Gutiérrez staying on the bench for the duration of the match. The clash between the two league giants saw plenty of action but things didn’t heat up  until the second half when Ajax opened the scoreboard in the 63rd minute by Quincy Promes. However PSV countered with their own goal in the 77th minute by Donyell Malen. Edson played the full 90 minutes and continues to build his skill set with every touch of the ball.