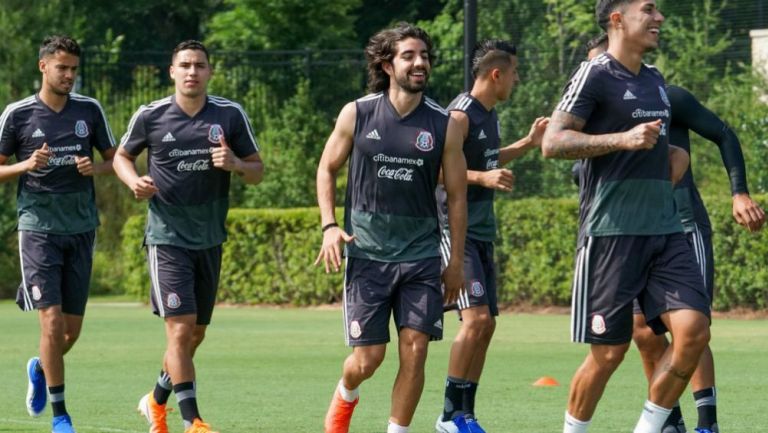 Much of the chisme around El Tri in its buildup to the Gold Cup has been the number of injury withdrawals and no-show players. With Javier Hernandez, Hector Herrera, Jesus Manuel Corona, Hirving Lozano, and other first team protagonists ruling themselves out of the Gold Cup, either due to injury or personal matters, many would have thought El Tri‘s Gold Cup might feature a squad that might lack the high-end skill.

But additional injuries to Carlos Salcedo, Miguel Layun, and Jose Ivan Rodriguez have forced Gerardo Martino and his staff to wonder behind a mask of stoicism during El Tri‘s training ahead of Wednesday’s duel against Venezuela in Atlanta, Georgia.

The novela seems already written with a short Copa Oro squad list, and the battles of Europeos past and present against the federation set to dominate the narrative of a side that fails to take back the title of champion in CONCACAF’s continental tournament, even though that battle appears to be for good reason.

But it precludes the additional work “Tata” and his staff had put many players through throughout the first five months of the Argentine manager’s tenure that already seemed to yield a side that could make more chances and play more interchangeably while getting the goals required for El Tri‘s obligations. It also precluded the opportunity that El Tri‘s myriad injuries and potential losses were opportunities for other players to get their chance.

The Vinotinto themselves under Rafael Dudamel are themselves preparing for Copa America activity in Brazil. The selection under Dudamel is also organized and can take on a predatory role fairly easily in games, as it demonstrated on Saturday against Ecuador in its first of three preparatory matches for the South American championship that commences in Brazil on June 14.

The Venezuela squad lacks the dribble-happy winger Sergio Cordova and veteran midfielder Romulo Otero, but brings out the next great American shot-stopping and ball-playing goalkeeper in Millonarios Wuilker Farinez. Farinez, like Keylor Navas for Costa Rica, could force El Tri have to be more precise than they otherwise had been in order to beat him. If El Tri is not careful, the Vinotinto could hit them through what might be a weak point for El Tri–through the center of the pitch. [El Tri have often preferred to attack from the flanks, whether it be by dribble or diagonal pass.]

Fortunately, there is a prize for many El Tri players that is immediately ahead of them–a definite place in the Gold Cup squad, as Martino revealed in his pre-match press conference.

As for the initial lineup, Fox Sports MX and Record contributor Ruben Rodriguez hinted that Martino may have already settled on his initial lineup though he added that the lineup was merely a possible alignment. That lineup is based out of a 4-3-3 formation with Jonathan Orozco in goal, Jesus Gallardo, Nestor Araujo, Diego Reyes, and Fernando Navarro in defense, Edson Alvarez, Carlos Rodriguez, and Erick Gutierrez in midfield, and Rodolfo Pizarro and Roberto Alvarado flanking Raul Jimenez on the forward line.

The activity kicks off at 9:00 PM Eastern DST (UTC -4) from Mercedes-Benz Stadium in Atlanta and can be seen on UniMas and Univision Deportes Network in the United States.

‘Tata’ names preliminary Gold Cup squad without many of its stars.
Mexico 3, Venezuela 1: El Tri come from behind to defeat the Vinotinto
To Top