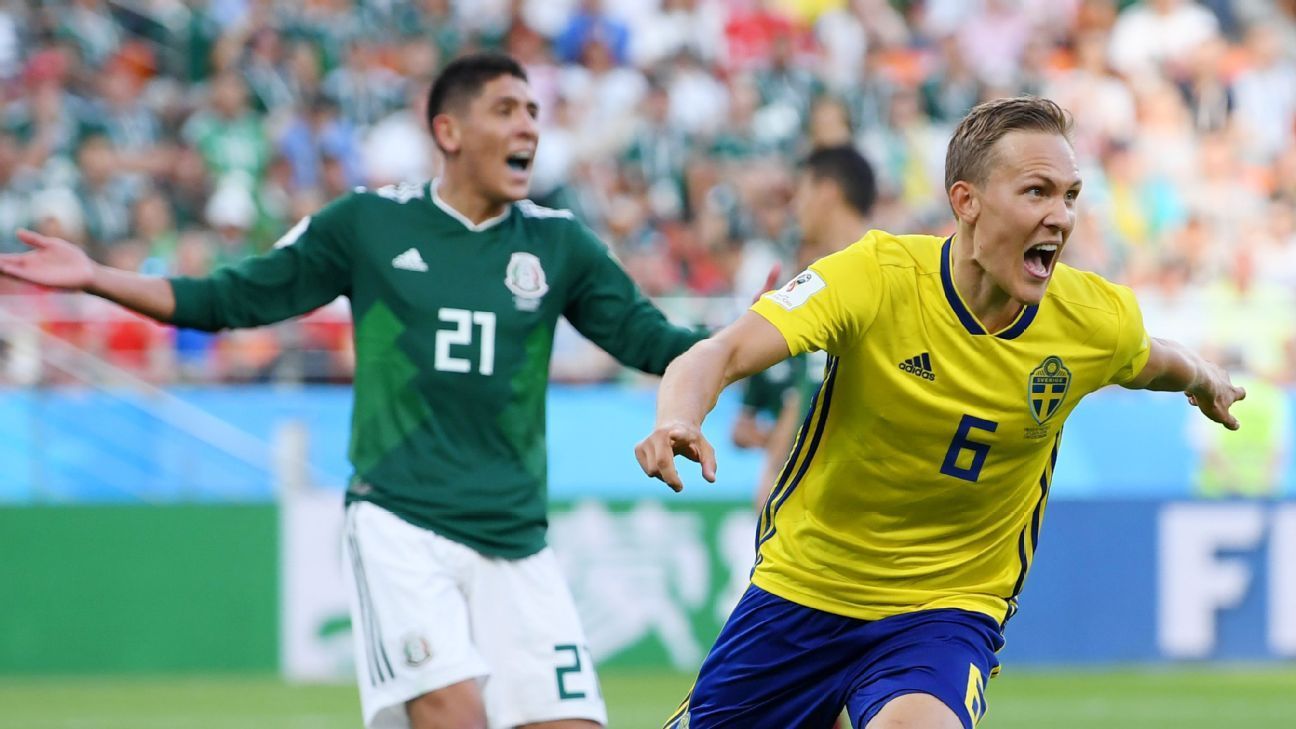 Despite a devastating three-nil defeat to Sweden, Mexico booked their place in the last-16, courtesy of Korea’s stunning victory over Germany. But what went so badly wrong for Juan Carlos Osorio’s men? Tom Harrison offers his view…

It’s an over-simplification to suggest that all four play the same as Sweden, just as a result of geographic proximity, but there are plenty of similarities. These Northern European nations are known for excellent organisation out of possession and their threat at set pieces.

Along with the warm-up matches, Osorio’s philosophies appear conducive to dealing with opponents that possess an aerial threat. After revealing that “the dead ball” was his “biggest worry” when Mexico drew with Venezuela in the 2016 Copa América, Osorio has worked hard, and had success, at improving El Tri’s set piece solidity. The Colombian also uses a centre-back at full-back to boost Mexico’s aerial strength.

Despite this preparation, Mexico were unable to prevent Sweden from creating opportunities at set pieces. Particularly disappointing was the multiple occasions when overloads were created at the far post as Sweden delivered the ball into the box.

Three times Edson Álvarez faced a near-impossible task, having to try to mark two players at once.

With one of the centre-backs dragged out of position, and a complete lack of defensive support by Miguel Layún, Edson was left alone with two players at the far post for two of Sweden’s three goals.

Yes, Álvarez’s own goal was a terrible mistake, but being put in this position time and time again is unacceptable from a coaching perspective. Osorio appeared to have done more than sufficient preparation for this match, but the two v one situations inside the box suggested the opposite.

Breaking down the chaos 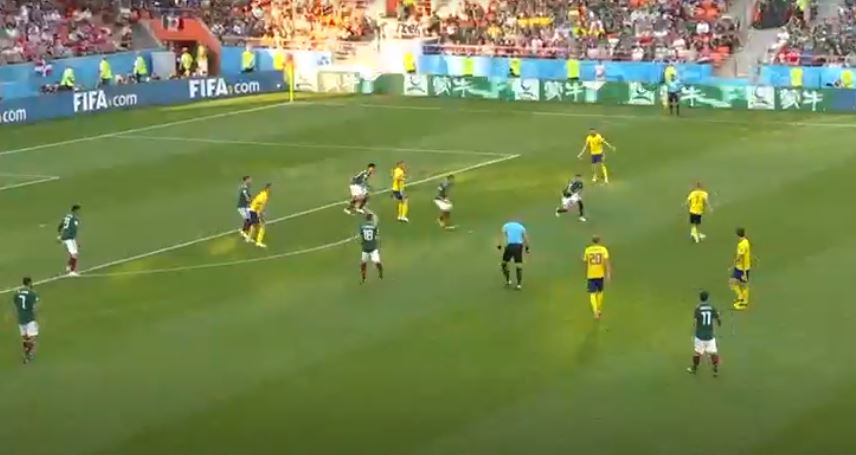 Sweden’s first goal epitomised Mexico’s poor defensive performance. The danger for El Tri begins as Héctor Herrera slips, and has to get back to his feet. Sebastian Larsson (in possession) doesn’t necessarily possess too much of a threat at this moment in time, but Héctor Moreno believes he does, so steps out of the back four to press. 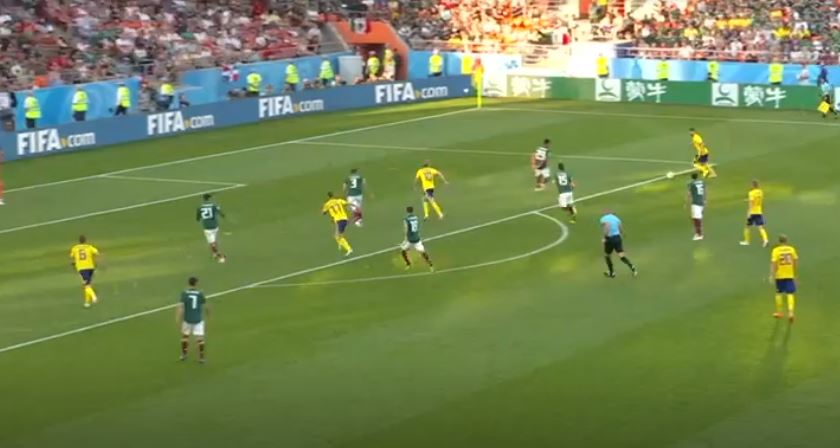 The ball is played wide, and Jesús Gallardo goes across to press. With Gallardo leaving his marker, Moreno out of the back-line and Andrés Guardado and Miguel Layún failing to track back, Carlos Salcedo and Edson Álvarez now have three Swedish players to mark between the pair of them. 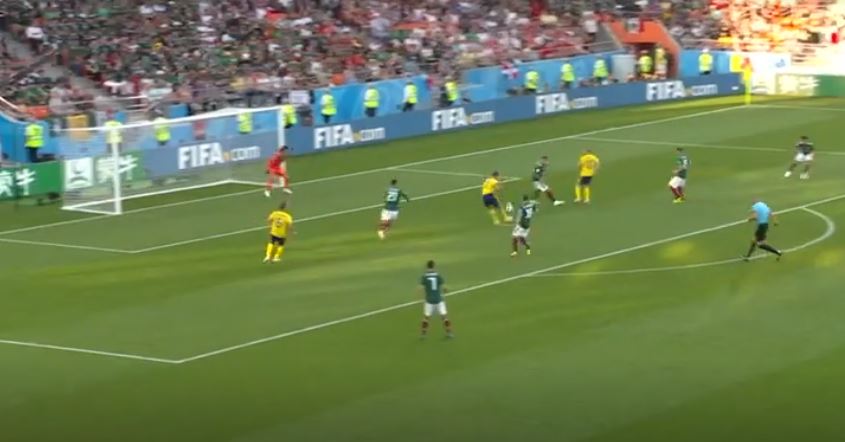 This is an impossible task for Salcedo and Álvarez, and Edson is left caught between two Swedes. Sweden do get fortunate as the mis-hit shot loops perfectly into the path of Ludwig Augustinsson, but Mexico deserved to be punished for the situation they found themselves in. It was a highly preventable goal, but poor decision making, which could be the fault or the individual or of the coach, cost Mexico dear.

Emil Forsberg plays for one of the most sophisticated pressing teams in the world, Red Bull Leipzig, and Sweden put Forsberg’s out of possession quality to excellent use against Mexico.

As in the Korea win, right-back Álvarez shifted centrally when El Tri were playing out from the back, creating a three-man defence. Ordinarily, this would have resulted in Mexico’s three defenders outnumbering Sweden’s two strikers, offering a free man and the potential to move up the pitch.

Forsberg prevented this from happening. The Leipzig attacking midfielder faced up against Edson on Mexico’s right, making it a three v three. In addition, Forsberg didn’t press Álvarez particularly aggressively, which would have made it easier for Edson to play or dribble around him. Instead, Emil picked up positions that cut-off passing lanes for Álvarez, most commonly the passing lane into winger Miguel Layún.

Mexico didn’t adapt to the excellent work from Forsberg, and struggled for the majority of the match to play through Sweden’s first line of defence and into the midfielders.

Most of El Tri’s good play came after long switches of play to Hirving Lozano on the left, who hugged the touchline to stretch Sweden’s defence, but these passes weren’t played often enough.

Hope is not lost

One poor defeat doesn’t make Mexico a bad team, just as the victory over Germany didn’t make them an outstanding team. Thanks to Korea’s heroics, El Tri are into the last-16 and still have a chance of making the famed quinto partido. Brazil, as was always expected, will be Mexico’s opponents, and although it’s set to be an extremely difficult match, Brazil are an opponent that might just suit El Tri.

Mexico thrived at keeping compact and hitting on the counter against Germany, and could find the same joy versus five-time winners Brazil. Brazil are evidently stronger than Germany, but they may prove a better prospect than Switzerland, another well-organised European side that threaten from set pieces.

However, Mexico must improve when they attempt to play out from the back, which they did even against Germany. Sweden are known as having one of the slowest attacks in the World Cup, but even they were able to win a penalty on the counter after Mexico lost the ball when playing out from the back. It’s been a concern throughout Osorio’s time in charge of Mexico, and it still is today.