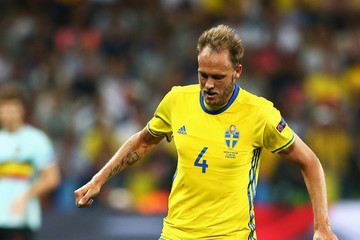 YEKATERINBURG, Russia. A rampant second half from Sweden with goals by Ludwig Augustinsson (50′), Andreas Granqvist (pen. 62′) and an own goal from Edson Álvarez (73′) sent them to a 3-0 defeat of El Tri at Yekaterinburg Arena to earn the European side top spot in Group F.

Going into the match, El Tri knew that a draw was the minimum result required for them to win Group F outright while Sweden knew they had to win and hope for the Germany-Korea Republic (South Korea) match to end with a Germany victory. That did not happen as the Daeguk Warriors defeated Germany 2-0.

Sweden opened the game applying pressure on El Tri and generating chances. The best chance very early on game on a bizarre free kick called against Guillermo Ochoa for handling the ball outside the penalty area that appeared to be handled just inside. However, Emil Forsberg’s free kick was eventually directed into Ochoa’s hands.

Eventually, El Tri found their footing and started to exercise control of the ball and forced the Blågult into a defending from a low block. However, that low block appeared to work to stifle chances early on. All that did was force El Tri to change how they attacked the Swedish defense to try to force a side whose concentration was hard to break to break the very concentration they appeared to be known for.

After a dribble by Hirving Lozano evading a couple of Swedish defenders into space, Carlos Vela came close in the 16th minute with a shot that bounced wide of Robin Olsen’s near post. But Sweden responded with a chance of their own when Filip Forsberg fired a shot wide of Guillermo Ochoa’s goal on a quick counter that caught El Tri in a moment of inattention down its defensive right flank (attacking left).

Sweden tried to make more chances down the left and punish Mexico for over pursuing tight areas in its pressure. But an alleged handball by Chicharito in the 29th minute provided Sweden with a potential chance. While the video assistant referees did not deem the alleged handball a penalty, Guillermo Ochoa was forced to parry away a header from inside the six yard box two minutes later.

Sweden continued to allow Mexico to operate from possession and try to control El Tri from where it could pass and control the ball. The strategy employed by the Swedes diffuse potential chances for El Tri and generate their own. And in the 38th minute, a Hirving Lozano recovery prevented one such dispossession from yielding a chance.

Both teams continued to employ their tactical strategies effectively. But eventually, the Blågult got their best chance on the stroke of half-time when Markus Berg was played in on goal 2-vs-2 on a counter with space to shoot from outside the area. However, Berg fired his shot wide of Ochoa’s near post.

Ten minutes after their first goal, Sweden earned a penalty when Hector Moreno made a late tackle on Markus Berg inside the area. In the 62nd minute, Andreas Granqvist converted the penalty to double Sweden’s advantage. Ochoa guessed correctly, but Granqvist placed the penalty just above Ochoa’s diving reach.

Sweden got an own goal from Edson Álvarez to extend their lead to 3-0 in the 73rd minute when he miscontrolled a cross straight into his own goal.

El Tri continued to look for a consolation goal late and got a chance at one 10 minutes from the end of the 90, with Vela on the ball from two meters out. But Vela dragged his shot wide off target, to continue a frustrating day for Mexico strikers.

With the win of the match and Group F, Sweden would face off against the second place team in Group E while Mexico, after getting help from Korea Republic’s 2-0 victory over Germany, move on to face the winner of Group E in Rostov-on-Don on Monday, July 2.