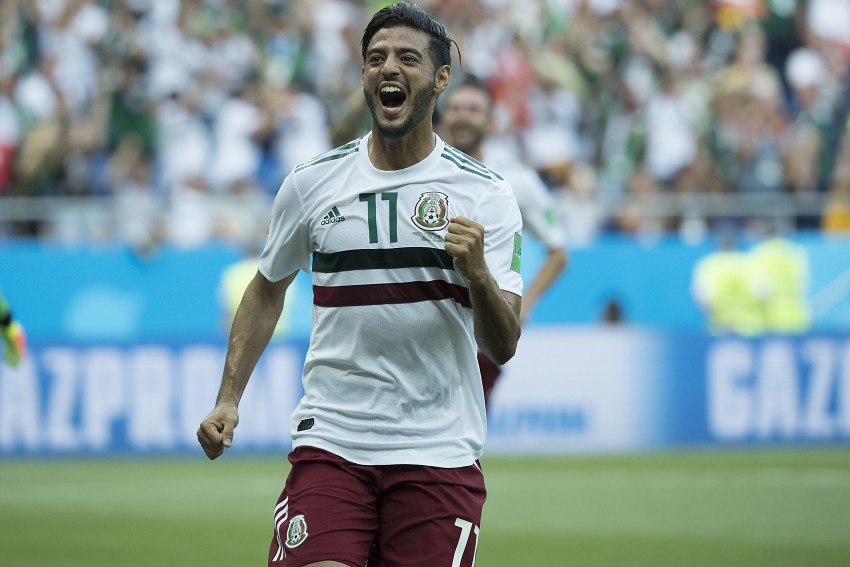 ROSTOV-ON-DON, Russia. El Tri closed in on a place in the Round of 16 with a compelling 2-0 defeat of South Korea. Carlos Vela (penalty, 26′) and Javier ‘Chicharito’ Hernandez (66′) helped El Tri survive what was a more open match against a fluid South Korea side. Son Heung-Min (90+3′) got a goal back for the East Asian selection, but it was not enough to avoid defeat.

Mexico opened the match operating heavily out of possession, looking to find a breakthrough early. However, it was the Daeguk Warriors, who fouled several El Tri players early and often, who ended up having the better chances earlier.

The first chance off the counter for the Daeguk Warriors came only seven minutes in, when off a counter to the left, Hirving Lozano intervened on the left flank to take away a chance for Lee Jae-Sung to score from the right wing. Several minutes later, Hirving Lozano recovered a goal scoring chance off the counter after Son Heung-min dragged beyond Edson Alvarez to set up what could have been a shot on an open goal with a hard challenge.

El Tri were not without their chances with the possession and started to find more chances on goal themselves. None of the chances came better than a penalty off a clearly handed cross attempt by Andrés Guardado in the 25th minute. Carlos Vela converted the penalty beyond South Korea goalkeeper Jo Hyun-Woo to open the scoring.

The next minute, on a sustained buildup, Hirving Lozano had a chance to double the lead off the dribble inside the area but fired his shot well wide of the far post.

Guillermo Ochoa also intervened late in the first half to stop a late first half chance by Son Heung-min, amid significant Korean pressure on his goal.

The second half started with El Tri and the Daeguk Warriors both finding chances on frame and fluidity with their passing and movement. Carlos Vela and ‘Chucky’ Lozano both tried to connect on chances early in the half. But it was Lee Jae-Sung and Moon Seon-Min, through Hwang Hee-Chan’s control and recognition of space for those attacks, who forced interventions most from the Mexico defense early on.

And early on, the Daeguk Warriors returned to a heavily physical strategy without the ball, trying to tackle the ball and El Tri players hard to try to force the likes of Andrés Guardado, Miguel Layun, as well as Hector Herrera. The strategy, despite getting several Korean players booked, helped to open up a long passing game for both teams.

Eventually, off of one counter in the 65th minute, Mexico doubled its advantage as Hirving Lozano found Javier ‘Chicharito’ Hernandez inside the area to double El Tri‘s advantage. The goal was Chicharito’s 50th international goal, the first El Tri player to ever do so in an international career.

As the match wore down, few teams found additional chances on frame. However, Guillermo Ochoa received a hard, legal challenge inside the area while trying to cover up a wayward shot.

Three minutes into second half stoppage time, Son Heung-Min ended El Tri‘s clean sheet with a dribble and curling shot from outside the area that surprised Guillermo Ochoa. But it would not be enough for the Daeguk Warriors to take anything from the match.