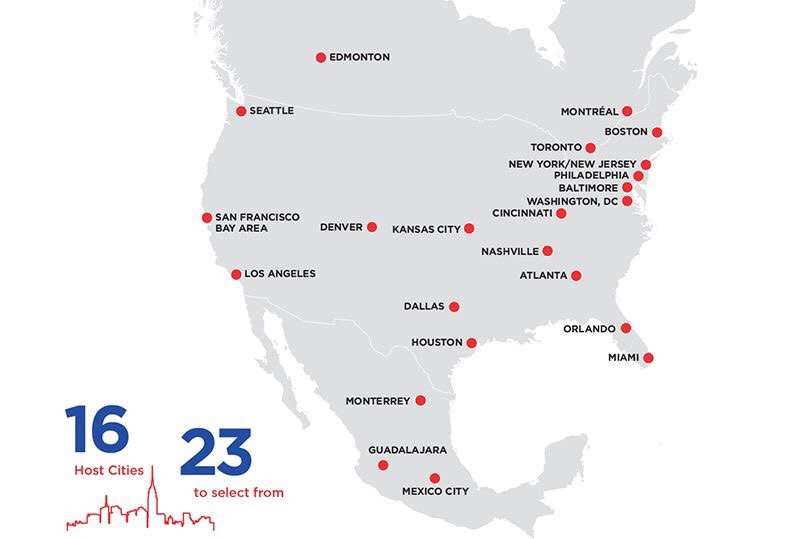 On Wednesday, FIFA announced that the United States,  Canada, and Mexico’s bid to host the 2026 World Cup was successful in a comfortable 134-65 vote victory, with 1 member abstaining (Iran).

The victory of the World Cup hosting rights would mean that the first expanded 48-team World Cup would return to nations that had hosted three previous World Cups, including two tournaments widely considered to be some of the most significant of all time.

The vote also signified that concerns about escalating tensions between the bidding nations and a potential change in the political climate might not have appeared to affect the voting process all that much.

When the vote happened, there looked to be some surprises. The Moroccan bid committee worried about what Guam, Puerto Rico, and the US Virgin Islands, all U.S. territories, would do and had asked at one point for the three nation/territories to be excluded. But in the end, the three U.S. territories ended up voting against the United States-led bid, a surprise to many observers. Russia was also another surprising vote for the North American joint World Cup bid.

However, it appeared that appeals to a systemic plan that was worked through in a lot more detail, and the promised billion dollars in revenue won over most voters over a World Cup bid that was sold on emotion and optimism for the future.

There are a few more catches with the 2026 World Cup–most of the games would be taking place in the United States, with the games taking place in cities and metroplexes in the United States including New York City, Washington (DC), Baltimore, Miami, Houston, Philadelphia, San Francisco (Bay Area), Los Angeles, Seattle, Denver, Kansas City, Dallas, Houston, Cincinnati, and Boston, while Mexico, despite its past history of hosting memorable World Cups in 1970 and 1986, will only see games in Monterrey, Guadalajara, and Mexico City. (Mexico would only see 10 of 80 total games come onto its shores.) In Canada, only Edmonton, Toronto, and Montreal  would host matches during the 2026 tournament.

And FIFA voters ignored questions many questions posed by sport governance expert and University of Colorado professor Roger Pielke, Jr. as to where and whom many of the USSF’s and Soccer United Marketing’s expenditures for the 2016 Copa America Centenario that appeared on its IRS-990 forms went.

One other caveat of the joint host bid would be that not all of the hosts would automatically qualify for the 2026 tournament. According to FIFA president Gianni Infantino, the number of teams coming out of CONCACAF would come out of the 6.5 slots allocated to the federation,  and it would be for CONCACAF to decide how many teams would receive automatic places.