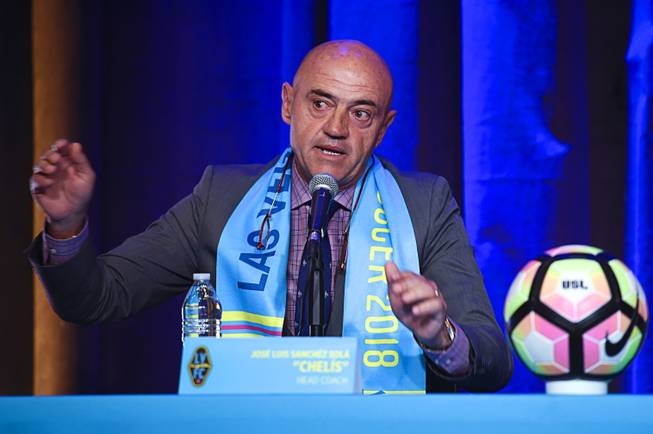 In the press conference, CEO Brent Lashbrook explained that the new USL team had wanted to bring ‘Chelis’ in because his brand of football was based a lot more on risk-taking, and in part because ‘Chelis’, who has worked in the United States both with Chivas USA and with ESPN Deportes, is functionally bilingual. (Sanchez Sola had been a regular panelist on the network’s flagship Mexican futbol talk show Futbol Picante.)

And in the introductory press conference, ‘Chelis’ was very much bilingual, moving between English and Spanish in his responses. Although he had a translator at hand at the conference and the Lights’ executed an equally bilingual social media strategy, the former Puebla, Estudiantes Tecos, Veracruz, Chivas USA, Correcaminos, and Venados manager stressed that he would improve his English to be better able to make the bridge to English-speaking fans himself.

At the Gold Spike meet-and-greet with fans later that night, ‘El Chelis’ opened up about the business of bringing in players, saying that he wants his first signing to be a local star and that the team will hold tryouts in December.

When going back to the nature of his coaching and his perceived care-free nature, Sanchez Sola commented, “I can no longer change who I am, but I can improve.” However, in recent times, he could be more than simply carefree and comedic. He could be inspirational, as he was with Veracruz during their Clausura 2014 season, when he tried to navigate the side to safety, Before the match, he held a sign to his players which read, “I deserve to be here.”

And his only other comment that night had addressed the fans who would be watching Lights FC games. “”In a conflict-filled world, where all of us have problems with work, family or a lot of other problems, I promise that when you come to the stadium, turn on your TVs or computers and watch a game, you’re going to forget about your problems,” he explained. “Now, when the game is over, the problem will still be there,” added Sanchez Sola as a punchline.